Movie Review: “Gravity” is a thrilling, spinning spacewalk worth taking. 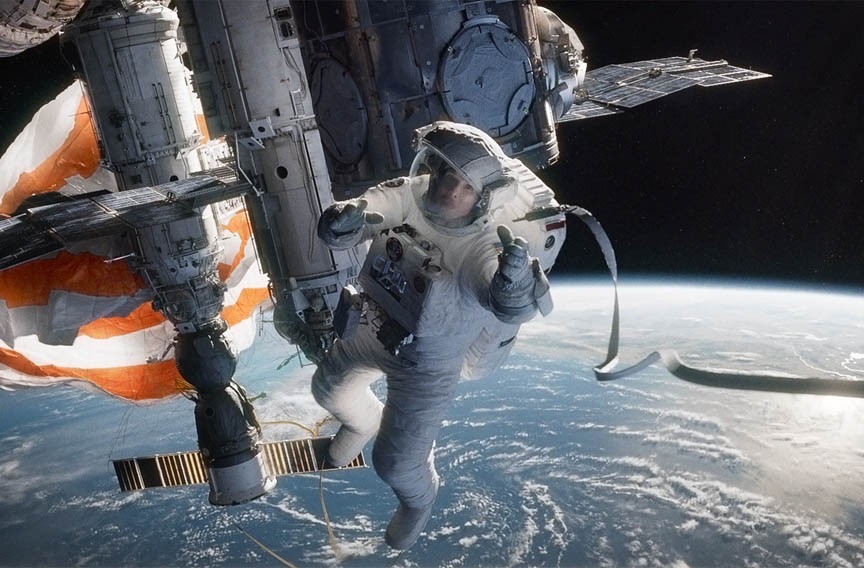 Alfonso Cuarón’s “Gravity” is one of the most rare contemporary cinematic experiences: It’s a really good movie.

It’s unfortunate that really good movies are so few and far between these days, but they are, and that makes “Gravity” seem perhaps even a little better than it is. That’s not to take anything away from it. It’s a smart, well-made, highly entertaining film that deserves to be seen on the big screen. It’s just that some of the praise has ventured into the interstellar reaches of hyperbole.

That said, yes, see it in full Imax 3-D if you can. It’s a visual wonder as much as an edge-of-your-seat suspense film, deserving as much screen space as possible to reveal all of its gorgeous outer space.

“Gravity” is about what can go wrong when we detach ourselves from the amount we’re accustomed to and venture into that blackness beyond the Earth. It begins in the quiet calm of orbit around Earth with astronauts Ryan Stone (Sandra Bullock) and Matt Kowalski (George Clooney) trying to repair the Hubble Space Telescope.

Even these early moments are a little tense. Kowalski and a third astronaut, whom we never meet, seem too at ease. Only Stone outwardly demonstrates the trepidation of working about 100 miles up and out of the air. She has the least experience, and is the most nervous. And why not? Space is vast, without any room for a misstep.

A movie about astronauts working on the Hubble just wouldn’t be a movie, however, without a big one. A huge swath of debris is on its way, arriving like an entire disintegrated football stadium while Stone and Kowalski are working, killing everyone but them and irreparably damaging their craft. The question becomes not just how they get home but whether they can.

What follows is a combination of stunning visuals and increasingly tense action. Their shuttle destroyed, Stone and Kowalski use protocol and ingenuity to help themselves. But every handhold and foothold proves brief respite in their highly dangerous environment. It’s compelling stuff, made to seem as realistically spacelike as a Hollywood film will allow. It’s simply spellbinding to behold even tired action tropes in a perfect digital rendering of Earth orbit.

That said, the movie’s beats and conventions are very familiar to any well-made action film. There’s usually no score in space, and Steven Price’s might seem a little too intrusive to some. There are also several instances where Cuarón cheats a little, especially with other sound issues (and there’s the Bullock hair thing).

These are minor detractions in an otherwise extremely enjoyable experience. The most worthwhile question might be asking whether “Gravity” has anything more to offer than thrills. It’s difficult to say, but showing what it’s like up there conveys by itself a sense of wonder, about not only space but also the Earth that protects us from it.

Looking down on that large, warm, watery marble orb from the vantage of total emptiness and seeing the safe, life-supporting terrain below rejuvenates your appreciation for it. Things like plentiful, breathable air are rare and precious within the enormous ocean of space. Gravity is nice, but only because it makes possible all that we cherish. “Gravity” makes that very clear. (PG-13) 90 min.