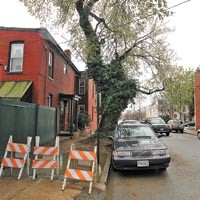 The city's latest tree saga has been continued. A proposed City Council ordinance to cut down and replace an American elm in the city's Fan District took center stage March 22, where the dispute grew beyond neighbors.

The ordinance was introduced by 2nd District Councilman Charles Samuels March 8 on behalf of David Robinson, who says his house at Floyd Avenue and Plum Street has been damaged by the roots of the city-owned elm. Samuels' ordinance would require the city to get rid of the tree despite a city-wide moratorium on tree removal. It costs as much as $2,700 for the city to remove a tree.

Samuels said the tree rated “an eight out of 12” on a national tree hazard scale and warned that if City Council didn't pass the ordinance March 22, planting season would be over and the city would have to wait to replace the tree.

During the period for public comment, Plum Street resident Edmond Conway criticized the report of an independent structural engineer Robinson hired to assess root damage to his house. “There are no numbers in this report,” Conway said, arguing that the damage could be more accurately measured.

Another resident of Plum Street who opposed Samuels' ordinance, June Hazlehurst, argued that the septuagenarian tree enjoys iconic status in the neighborhood. “You have to love a tree that damages cars and trips up VCU students,” she said.

Robinson and other supporters of the ordinance also spoke, with Robinson distributing a photo collage featuring the tree to city lawmakers. “A lot of people would say this tree is healthy,” he said. “I would say only growing.”

Councilman Marty Jewell moved for a delay in a vote on the ordinance. “I just can't vote to kill that tree,” concluded Jewell, who said he was “troubled” by Samuels' planting-season argument “when there are in fact two planting seasons.” Jewell suggested that the situation be evaluated by the new Urban Forestry Commission, charged with reforming the city's tree policy, which has come under attack in recent years. Residents have complained that more trees have been taken down than put up by the city's Department of Public Works.

Councilman Chris Hilbert, who indicated he supported Samuels' proposed ordinance, seemed to doubt the scope of the new commission. “There does seem to be too high of an expectation for what this tree [commission] is going to do,” he said.

Samuels' ordinance is scheduled for discussion again by council on April 26.