All the rage in the local food movement, a new advocacy group says it’s time for the city to legalize backyard chickens. 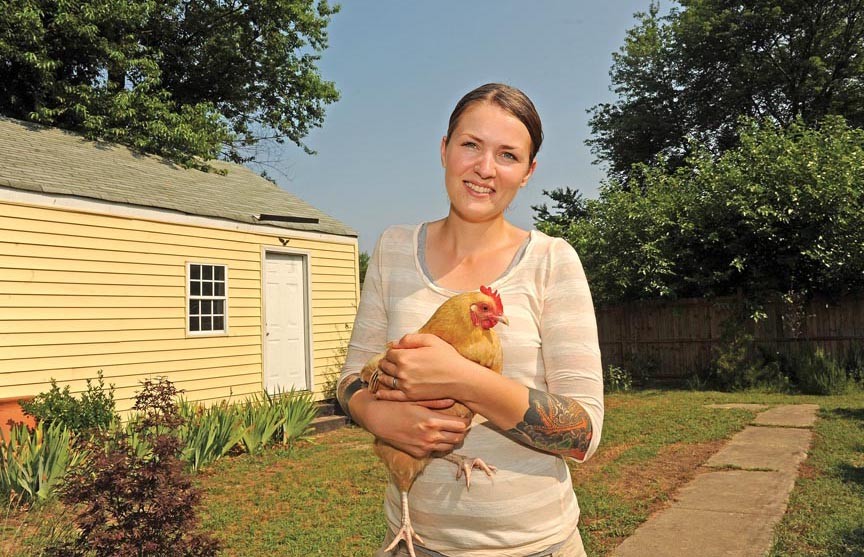 Like a lot of people with pets, Sarah Sinclair sees much more in her animals than first-time observers do. Clementine has a mischievous streak. Sweatpants is calmer, and in the summer likes to sit quietly beside Sinclair, like a dog might, and eat apples.

A dog, however, couldn’t be so easily taken from Sinclair. But if an aggrieved neighbor were to call Henrico County authorities, Sinclair’s chickens — all six of them, including Clementine and Sweatpants — would be history: Chickens mostly aren’t allowed in the residential areas of Richmond or Chesterfield and Henrico counties.

“We’re at the mercy of our neighbors,” Sinclair says.

Fortunately for her, the neighbors seem tolerant. But Sinclair and other chicken owners recently formed an advocacy group called Chickunz in a push to make chickens legal. They’ve circulated petitions, drummed up support through Facebook and appealed to politicians to allow hens (no crowing roosters). On June 8, members gathered nearly 400 signatures at Broad Appetit, the downtown food festival. With Richmond developing a sustainability plan, some backyard-chicken supporters say now’s the time to change the rules.

Why all the fuss about backyard chickens? Proponents say that homegrown poultry offers a multitude of benefits — environmental, social and nutritional. A hen clucks much more softly than a dog barks, generates less waste and offers an ideal alternative for people who wish to avoid factory farms. “It’s a basic food right to me,” says Copeland Casati, who started Chickunz.

Any idea that chickens are gross, she says, stems from people’s perceptions of chickens being raised in large-scale operations without adequate space or sunshine. A few hens in a backyard, she says, aren’t an unsightly, loud hassle, certainly not more so than the noises more commonly associated with suburbia.

“I assure you that the first people to start complaining about noise, of the possibility that they might hear a cluck, are the same people that are out there on Fridays at 5:30 with their weed wackers and lawnmowers going for hours,” Casati says.

“We live in a period where we are controlled by conventional agriculture. Just this little component of being able to have a few chickens in your backyard is very powerful,” Pressman says. “These chickens aren’t raised in cages stacked high, with their beaks cut so they don’t peck each other, and living on chemicals to keep them healthy.”

Closer to home, Charlottesville allows residents to have chickens as long as they’re fenced or penned-in. Charlottesville’s chief animal control officer, Bobby Durrer, says the rules seem to work with few problems other than the occasional loose chicken. “It works pretty good in town, it really does,” Durrer says.

For someone such as Sinclair, who grew up on a farm in Bedford, having chickens on her third-of-an-acre lot just seems natural. Most of her small flock, which includes a few extra chickens she’s holding for friends, are treated more like outdoor pets than livestock, although they provide her and her husband about a half-dozen eggs a day.

While she tells this, a rooster wanders up, clucking softly at the stranger in the backyard. “He only does that when someone new comes up,” she says. “He’s kind of like a dog.” S