Church Hill's renovated Robinson Theater becomes the latest old venue to find new life, but it's not looking for big names to fill the stage. 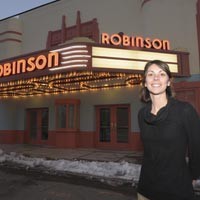 The illustrious theater, which opened in 1936, was a hub for films, jazz bands and comedians until its closing as an entertainment venue in the late '50s. Then it slowly spiraled downward from club to restaurant to pool hall before finally resigning itself to a nostalgic lot filler. Since 1987 it's remained unoccupied, full of dilapidated kitchen appliances and spoiled food — the final attempt to ride the success of the name of Bojangles Robinson into a viable business.

With the recent reopening of the Robinson, the once-thriving area can again boast a center of social interaction. But will the theater find its niche in the 21st century?

Reopened Feb. 20 for the first time in 22 years, the center featured music from Richmond's Fight the Big Bull, No BS! Brass Band and Brooklyn-based trumpeter and arranger Steven Bernstein. The center's executive director, Betsy Hart, says the success of the event was a hopeful sign for the future and vision of developers Mitch Bennett of Mechanicsville Christian Center and Michael Thaler of Equity Concepts.

“Honestly [this project] kind of fell into my lap,” Hart says. “The owners came to me with this vision of rebuilding this arts center and I partnered with them to facilitate and eventually take over their vision.”

In keeping with the spirit of yesteryear, Hart, who graduated as a public relations major three years ago from Virginia Commonwealth University, wants to make the Robinson a true community center, with such wide-ranging programs as afternoon dance and theater classes during the week and privately organized events. It seems the interest is certainly there.

Throughout the two-year renovation, Hart, Bennett and Thaler came across many Church Hill residents who conveyed how much the theater meant to the community. The project soon became “more than just an investment,” Bennett says.

But how to keep the theater from suffering the same fate it once had? Richmond's old theaters suffer from a variety of ailments: They're notoriously under-funded, in need of renovation or simply closed. The National is back after extensive investment, but the Byrd still needs significant renovation. These venues look to big events to pay the bills. How to keep the Robinson relevant?

“Well, we're definitely focusing on Church Hill by providing this space for them as a priority,” says Hart, “but other Richmonders have been interested in the venue as well for parties, weddings, concerts, et cetera.”

While the Robinson's calendar is tentative at the moment, more diverse events are beginning to take shape. March 21 saw a fish fry for Democratic gubernatorial hopeful Creigh Deeds. The theater has also been host to a gospel showcase and, last Friday, “Showtime at the Robinson,” the first of a series of community variety shows. There will be a dance competition in June as well.

The Robinson Theater's greatest success may not be in attracting marquee-spanning names, but in giving the community something it really wants — a place it can go. S