Our Theater Critic Has A Problem With “The Book of Mormon”

And it doesn't have to do with how the Mormons are portrayed. 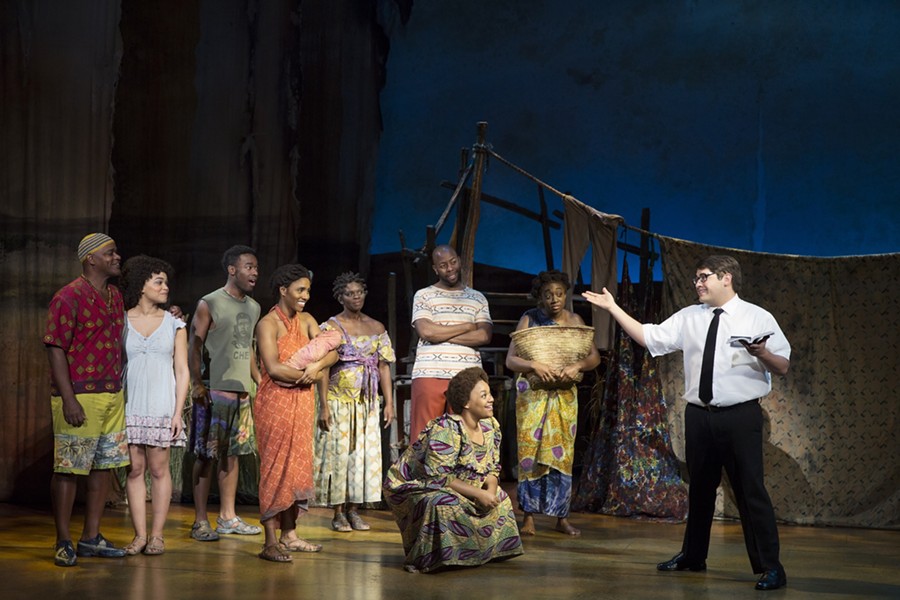 Whenever my being a theater critic comes up in mixed company, there’s a subject I try to avoid: Trey Parker, Robert Lopez and Matt Stone’s musical “The Book of Mormon.”

Especially before “Hamilton” stole its thunder as the one current Broadway musical everyone could name, it seemed like I couldn’t get away from the topic. The reason for my apprehension? I find the whole enterprise really fucking racist.

As a longtime “South Park” fan, I find little joy in tearing down show creators Parker and Stone (or “Avenue Q” co-creator Lopez, for that matter). But my job is to call ‘em as I see ‘em, and I’ve long had a problem with “The Book of Mormon.”

Currently onstage at the Altria Theater as part of the touring Broadway in Richmond series, the show follows the exploits of two young Mormon missionaries who are sent to Uganda to convert the locals. Upon arriving, the duo find a depressed and AIDS-ridden village suffering under the thumb of a warlord.

But as much as the show seems set up for a trenchant skewering of Mormonism as Parker and Stone did in the “South Park” episode “All About Mormons” – and they have plenty to say about the religion – the Mormons get off light. It’s the Africans who receive the bulk of the show’s mockery.

We may see a humorous depiction of a Mormon struggling with his sexuality, but the Africans are all portrayed as idiots who think raping babies will stave off AIDS and that typewriters are “texting devices.” And while it’s obvious that the show’s creators did their homework when it comes to Mormons – and there’s actually an undercurrent of support for religion in the show – the Africans are reduced to negative cultural stereotypes.

I’ve heard the argument that the portrayal of Africans is supposed to represent the Mormons’ view of them, and that the scene where they discuss their understanding of metaphor is supposed to prove that they’re deeper than their buffoonish rendering. If that’s what the show’s creators are going for, it needs more emphasis. Even then, it’s not as though American theater has the greatest history when it comes to depictions of black people.

That said, the show’s creators know how to put a musical together, with numbers like “Hello,” “Turn It Off” and “Spooky Mormon Hell Dream” humorously poking fun at the Mormons. They also borrow effectively, whether it’s the song “All-American Prophet” invoking “River City” from “The Music Man” or “Joseph Smith American Moses” effectively mimicking “The Small House of Uncle Thomas” from “The King and I.”

And the traveling production of the show is well staged, with Liam Tobin’s Elder Price playing the overconfidence of the effervescently Christian for laughs and Conner Peirson channeling a bit of Bobcat Goldthwait in his awkward Elder Cunningham. For devotees of local theater, there’s the added bonus of seeing former Richmond actor Josh Marin in a variety of humorous roles as part of the ensemble.

But the bottom line – and I realize my opinion is a minority one – is that I have a hard time sitting through this musical. I don’t consider myself a prude, and have no appetite for moral grandstanding, but I just can’t get behind this one. Eight years since it debuted, you can already feel the places where the musical pulled its punches instead of making a harder social critique of the world we live in.

Perhaps that’s a bit much to ask of the creators of a Broadway musical, but like when the smart kid turns in a half-assed school assignment, you know they can do better.

Broadway in Richmond’s “The Book of Mormon” plays through March 31 at the Altria Theater, 6 N. Laurel Street. For more information, visit altriatheater.com.