Why the Redskins are pitching camp in Richmond. 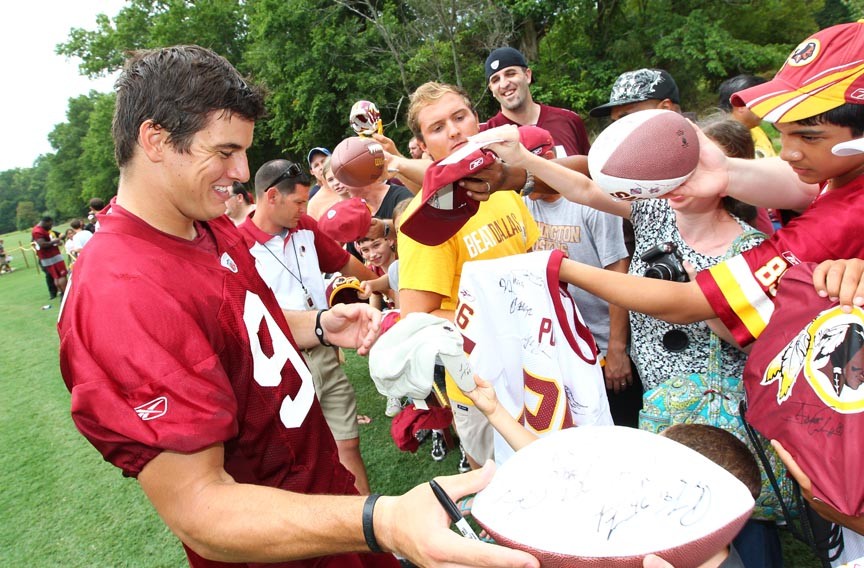 Is Richmond ready for the Washington Redskins?

The National Football League's most consistently over-hyped franchise (OK, probably second to the Dallas Cowboys) will move its summer training camp here next summer, which has sparked all sorts of excitement and unanswered questions: Why Richmond? What does it really mean in terms of national exposure for the city? Where will they play? (See story page 13) And how many games will they win this year?

On the field, the Redskins are consistent dullards, having qualified for the playoffs just four times in the last 20 years. They generally stink. But the Skins are the second-most-valuable franchise in the NFL, behind the Cowboys, and for years were the southernmost team in the country. From 1937, when the Redskins moved from Boston to Washington, until the league expanded to Texas and added the Cowboys in 1960, the Skins owned the South. The famous fight song, "Hail to the Redskins," originally ended the first stanza with "fight for old Dixie" before being changed to "fight for old D.C."

"If you went to the Skins' game in North Carolina [Panthers] last year, you would have thought it was a [Redskins] home game," says Kevin Ewoldt, an editor for Redskins fan site Hog Haven. The team long has had a fan base that stretches to Florida.

Indeed, that there's a lot more competition now — Florida alone has three teams — helps explain why Richmond makes some sense. Moving training camp 100 miles south is a smart move for the team, Ewoldt says, because of its centralized location for many fans on the East Coast. It's easy to get in and out of the city, where interstates 95 and 64 are relatively free of congestion. For 10 of the last 12 years, the Redskins have held training camp in Ashburn, just outside of Washington, which is a traffic nightmare.

The Redskins' move from Ashburn, which also serves as the team's year-round headquarters, bucks a recent NFL trend of staying home for summer training. For decades, football teams have used summer training camps to get players back into shape, build camaraderie and re-evaluate the standings of rookie and veteran players. Traditionally, camps were held out of town so players could focus on football without the distractions of daily life. By eating, sleeping and training together, players supposedly could forge better bonds.

But between new collective bargaining rules that limit number of practices and the rising cost of renting facilities and lodging players, most NFL teams stay home. Nineteen of the league's 32 teams will stay in town or use in-season facilities this summer, including the Redskins. So if it's cheaper to stay home, why move here?

For starters, the Redskins recently received a $4 million subsidy from Gov. Bob McDonnell to keep their headquarters in Ashburn (the team plays home games in Landover, Md., at FedEx Field). And Richmond Mayor Dwight Jones agreed to pony up $400,000 to help the team move its training camp here next year. So $4.4 million in taxpayer-funded subsidies makes an easier business decision.

Rich Dalrymple, vice president of communications for the Dallas Cowboys, says there are at least two other good reasons to hit the road: It strengthens the team and can earn fans in another locale. For the past decade, the Cowboys have bounced between San Antonio in their own backyard and Oxnard, Calif., for summer training.

"It's a really great way to build a fan base in another area of the country or another area of the state," Dalrymple says. For the next three summers, the Cowboys will spend their training time in the Los Angeles area, taking advantage of a market that hasn't had a pro football team of its own since the Raiders and the Rams left in 1995.

With 2,000 to 3,000 fans attending each practice, Dalrymple says the Cowboys sell a "great deal" of merchandise. While declining to discuss specific figures, Dalrymple says the team gets a bump in merchandise sales, helped because fans can get their newly acquired jerseys and helmets signed after practices. Every year, the team sends a tractor trailer with the team that Dalrymple describes as a pro shop on wheels.

"You get better chemistry when you get away from the distractions," Ewoldt says, adding that a number of recent Super Bowl winners went away for the summer. "It's just an old-school way of coaching."

The Redskins may or may not see a bump in victories or merchandise sales after camping in the River City, but it's likely to help raise Richmond's profile nationally.

The city will get national media coverage of the camp, akin to Virginia Commonwealth University's Final Four run in 2011. Training camp really is the kickoff to the NFL season, and it's only true competition for air time is Major League Baseball, which is largely irrelevant in late July and August. Football always gets top billing on ESPN, and training camp is no different.

Though the coverage will focus more on the Redskins than the city, Dalrymple says news stories running with a Richmond dateline alone will raise the city's notoriety. Unlike the Final Four coverage, the Redskins will put a concentrated focus on Richmond while diehards tune in for daily updates on how the team is shaping up. And with the team's new rookie quarterback, Robert Griffin III, the Skins are expected to get even more national attention during training camp. The No. 2 overall pick in this year's NFL draft, Griffin is widely considered one of the most physically gifted quarterbacks ever drafted.

The city also will benefit from an influx of fans.

"Training camps for fans can become a family vacation destination," Dalrymple says. "When 2,000 or 3,000 people a day are convening on a location and spending the night, eating in restaurants and spending money, it obviously has a benefit to the community."

This year's summer training camp will kick off July 26, and Ewoldt says the Redskins normally pull in anywhere from a few thousand to 15,000 spectators at a given practice. On Fan Appreciation Day, when the team sets aside a good chunk of time for autographs, that number can balloon to 30,000.

While many details about where the team will locate in the city are still uncertain (see sidebar), Ewoldt is convinced the team is moving in the right direction.

"Now that we have a stud quarterback [in Griffin], I think we can get nine wins this year," Ewoldt says. "There's a lot to be optimistic about." S