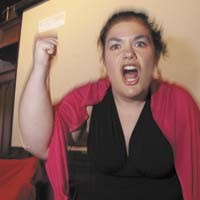 Let's be honest, it takes a lot of balls to devote an entire stage production to a woman's private parts. With forays into sex, love, rape, mutilation, masturbation, menstruation, birth and the ever-elusive orgasm, Eve Ensler's “Vagina Monologues” has been a source of criticism and praise for more than a decade. Perhaps in an effort to up the ante in future debates, Christian theological students and professors of Union Theological Seminary (like Allison Unroe, pictured) will give a one-night-only performance to raise money for local women's groups, shelters and crisis centers as part of a benefit effort. The production, which features such undaunted pieces as “The Little Coochie Snorcher That Could” and “The Woman Who Loved to Make Vaginas Happy,” comes to the campus's Watts Chapel Thursday, Feb. 26, at 8 p.m. 3401 Brook Road. For tickets call 355-0671. — Mike Hilleary