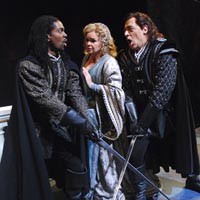 Modern television owes a great deal of debt to the performances of centuries-old opera. Unrealistic and convoluted plotlines? Check. Dramatic misunderstandings that lead to unnecessary conflict? Check. When it really comes down to it, the only difference between “La Traviata” and “Grey's Anatomy” is that the latter uses hip indie-songs to emphasize the emotion of the situation instead of just letting the characters sing it themselves. The Virginia Opera kicks off its 34th season with a two-night stop at the Landmark Theater, performing Giuseppe Verdi's “Il Trovatore.” It's tale of a boy stolen from his count father by a gypsy and raised by the gypsy's daughter, who grows up and falls in love with the same woman as his real-life brother (the count's other son, right? Keep up.). Which, if you're paying attention, is practically the same plot as this season's “Gossip Girl.” The shows are Friday, Oct. 24, at 8 p.m. and Sunday, Oct. 26, at 2:30 p.m. Tickets are $22-$90. 866-673-7282.