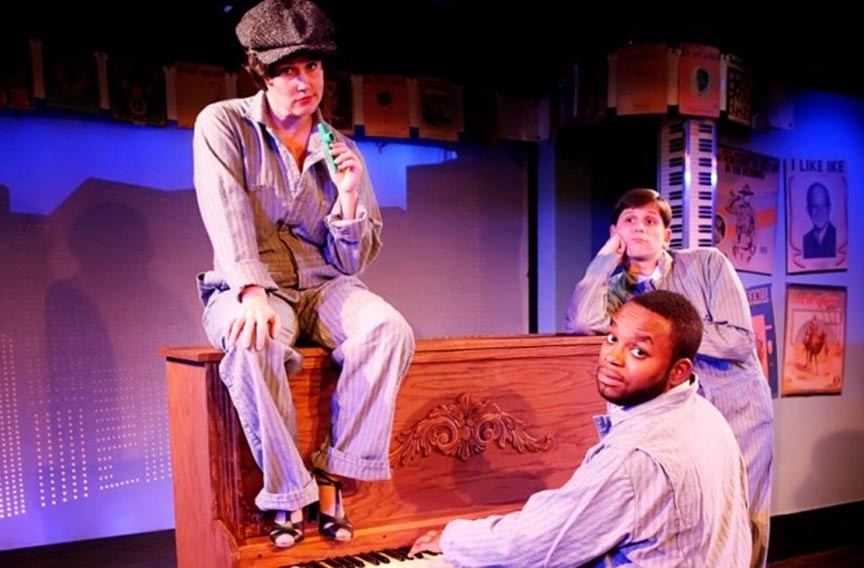 The story of composer Irving Berlin is one straight from the American mythos.

A Russian immigrant to New York, Berlin quit school at age 8 to help support his family. Realizing he was more of a financial burden to his family than a boon, Berlin took to the streets at 14. For years he worked bars and street corners as a singer, eventually writing his first hit song at the age of 23.

From then on, Berlin was a veritable hit machine, cranking out gems such as "White Christmas," "Blue Skies," "Puttin' on the Ritz" and even "God Bless America" that remain popular even today. This December, Berlin's rosy take on story brought back to life in Swift Creek Mill Theatre's "I Love a Piano," a musical revue of his work.

The show burns through more than 60 Berlin songs at a breakneck pace, tying together some amusing vignettes and excellent singing that transports viewers from the Roaring '20s through the end of World War II. Georgia Rogers Farmer, Matt Shofner, Cat Wheelehan, Durron Marquis Tyre and Grey Garrett all do great vocal work here. Robbie Fuhrman's voice is serviceable but doesn't stack up to the powerhouse singing of his counterparts on stage.

Shofner is a natural entertainer, and the Richmond professional debut of Wheelehan undoubtedly proves that she's a performer with a promising future. Of the pairings that occur throughout the course of the show, none is as strong as when these two are together. But in the end, it's the ladies who really steal the show. The voices of Farmer, Garrett and Wheelehan come together beautifully, and their rendition of "Anything You Can Do I Can Do Better" is easily the highlight of the evening.

As evidenced in past shows, director Tom Width excels at creating old-timey theater, which is either a strength or a weakness depending on the viewer's taste. The show is as corn-pone as they come, but this is corn pone done well. In one of the show's military-themed numbers, the characters are ordered to "present arms" — which they obey by extending their empty hands to the audience.

Width's use of Berlin sheet music art on stage obviously fits the theme of the show, but the set's piano-key motif gives it the feeling of an elementary school music class. Paul Deiss' musical direction only occasionally misses a beat, but as conductor, he's been handed a difficult task, given that the musicians are behind the set and can't see anything happening onstage.

Ginnie Willard's lighting adds some emotional charge to numbers like "Count Your Blessings Instead of Sheep" and "What'll I Do?" and Dennis Clark's choreography gives a dash of fun to the proceedings. Maura Lynch Cravey's costumes are fine for the men, but at times the women might as well be wearing burlap sacks considering how poorly tailored their dresses are.

If you're a fan of Berlin, a man whose eternal optimism overcame his Dickensian upbringing, it's hard to imagine his songs sounding better. S