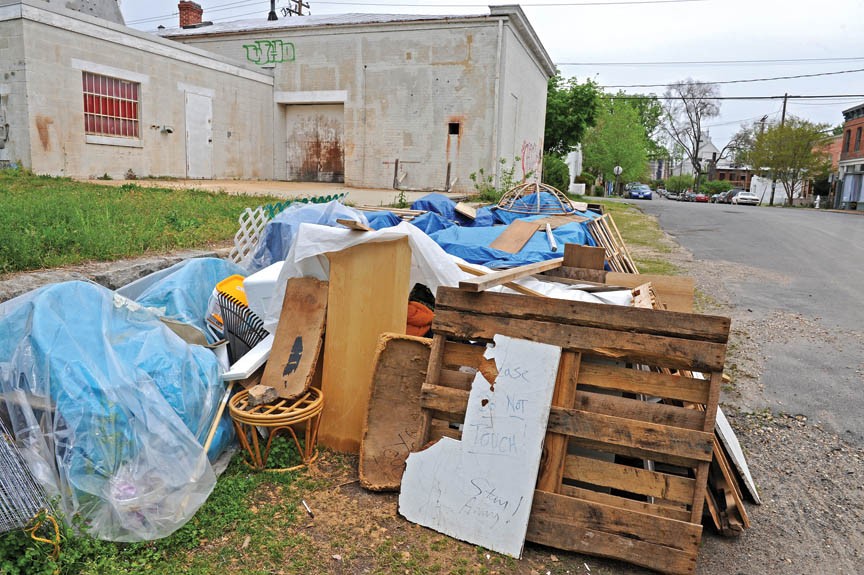 She's a tiny woman with a huge pile of possessions. She's perplexed the police, the city and the neighborhood of Oregon Hill for years. But a recent incident has brought things to a head.

According to police and residents, for most of the last four years, the woman (Style Weekly isn't using her name) has kept a collection of odds and ends in the backyards and vacant lots of Oregon Hill, sometimes with residents' permission.

Six months ago, she placed several pallets of things in Samuel P. Parsons Park. After receiving complaints, police told her to move her stuff. She then transferred her possessions to a tarp-covered pile, perhaps 25 feet long, on the edge of the Hollywood Cemetery parking lot.

"Please stay away!" declares one handwritten sign propped against the pile. Another sign: "Do not touch any of my things!! These things among them." At one end of the stack is a makeshift door, which leads to a small sleeping area softened with an illustrated calisthenics mat, a sleeping bag and a teddy bear.

The officers with the Richmond Police Homeless Outreach Partnership and Enforcement unit know the woman well. The unit seeks to build relationships with people who are homeless or mentally ill, encourage them to get help and ensure they don't endanger others.

On the afternoon of Thursday, April 7, a call comes across the police radio: "Lady there getting ruthless with protecting her property."

The woman allegedly has threatened a neighbor with a two-by-four, according to the initial police report, and the neighbor picked up a charred log to defend himself. The woman then fell.

When police arrive, blood is streaming from a shallow gash on her forehead and smearing her glasses. She refuses medical attention and starts telling officers about the neighbors' threat to her things.

"I don't care about them. I care about you," Officer Matthew McHugh tells her. "So what can I do?"

She ignores the question and keeps talking. "Let me show you my great masterpiece," she says: the pile.

Police are reluctant to charge the woman with trespassing, because that won't solve the problem. The Richmond Behavioral Health Authority can only intervene if she is a danger to herself or others; by the time they arrive, she is calm.

Oregon Hill neighbors say things have reached a point at which they can't overlook the problem anymore. "The woman needs help. That's all it is," says one former resident, who declines to give his name. Feeling sorry for her, some neighbors have offered her food, but then "she cusses them out."