Opinion: Why Richmond Needs to Save Larus Park

The city is selling water to Chesterfield at less than 1/5 the cost of what Richmond customers pay. Now public park land is on the line.

A proposal now before Richmond City Council is a horrible deal for the city. This bizarre ordinance would authorize Chesterfield County to lease 1 1/2 acres of Richmond’s pristine Lewis G. Larus Park for $1 per year in order to construct a 2 million gallon water tank and pumping facility, as well as to purchase an additional 5 million gallons of treated water a day at ridiculously low rates.

This disproportionate burden on city residents just got worse. On July 1, Richmond raised water rates by 23 cents to $4.04 per hundred cubic feet of water. That equals 748 gallons. The increase doesn’t affect the county, which pays only 74 cents per hundred cubic feet. And Richmond customers are saddled with a higher base water and sewer service charge that just rose to $32.07 per month. Selling water so cheaply to the county does not encourage conservation and puts Richmond businesses at a considerable competitive disadvantage.

Water customers in Richmond, which has much more poverty, are actually subsidizing Chesterfield’s ridiculously low water rate. The city charter authorizes the utility to include a payment in lieu of taxes, called a PILOT, on water bills. These levies are generally understood to include real estate and personal property taxes. But Richmond is the only utility in the state that charges a payment in lieu of federal income taxes on its water bills. This is unfair because no local business pays federal income tax to the locality, and it might even be illegal because this federal income tax levy on the water bill is not remitted to the Internal Revenue Service, but is instead deposited into the city›s general fund. Since the county’s contract does not allow this federal income tax payment, city residents will have to cover that cost. According to a utility official, Richmond customers can expect to pay $1 million every five years for the federal income tax PILOT on the sale of additional water to the county.

The administration brags that this project will bring in $1.3 million per year in revenue. However, this misleading figure is gross revenue. In fact, the net revenue is only 3.5 cents per 748 gallons. The additional sale of 5 million gallons of water per day would net only $85,000 annually from the sale of 1.8 billion gallons of treated water.

This ordinance is very unfavorable to Richmond. The county will pay to build its water pumping station and storage tank, but the city would be obligated to pay for the facility if Chesterfield does not renew the lease. A state code provision cited in the contract says that the city eventually will be responsible for shouldering the millions of dollars in costs for dismantling the county’s facility at the completion of its useful life. 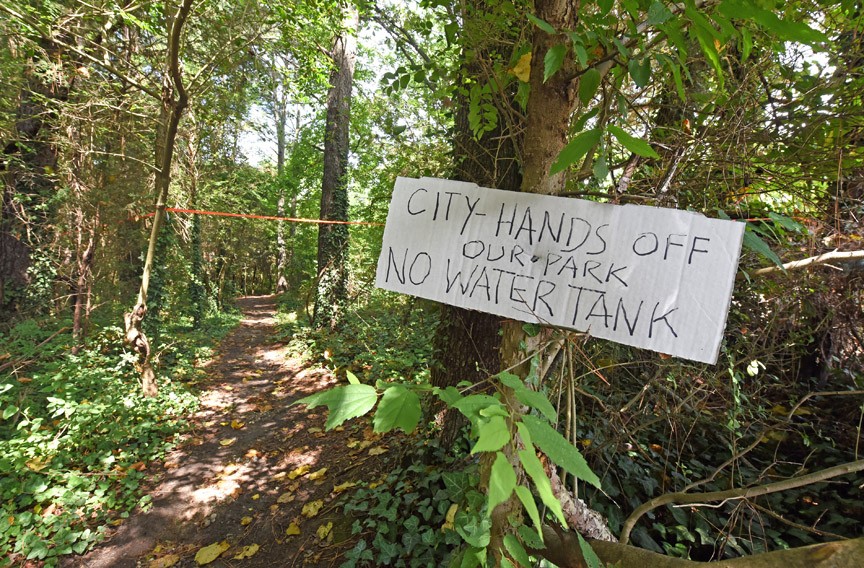 But the worst part of the deal is that 1 1/2 acres of precious Richmond parkland would be ruined for the project. No other locations were even considered. More than 350 trees would be removed next to the Larus Park Trail. Richmond City Councilors Kristen Larson and Parker Agelasto deserve high praise for seeking alternatives.

Allen L. Jackson, the city attorney, whose office helped to negotiate the deal, now has contrived a contorted legal justification for leasing Larus Park to Chesterfield for the water facility despite a city code section that prohibits leasing the park for any development. He bases his opinion in part on Merriam-Webster Dictionary’s definition of the word “development,” which he claims does not include a water facility. But Jackson could have found a more relevant definition in state regulations that specifically include utility facilities in their definition of development. The city attorney does concede, however, that deed restrictions may result in litigation and that City Council would need “to neutralize the self-imposed restrictions intended to preserve natural space contained in section 8-2 of the City Code.”

This project has been under wraps since 2012 when it was conceived during Mayor Dwight Jones’ administration. I can understand how Jones might want to shower his parishioners in Chesterfield with low water rates, but why would Mayor Levar Stoney be the patron of this flawed ordinance?  Stoney has a fortuitous opportunity to make good on his pledge to work for the people of Richmond. We can only hope that he will honor that pledge. S

Charles Pool is a Richmond artist and community activist.

CLARIFICATION: Other localities have real estate and personal property tax PILOT utility surcharges, but Richmond is the only utility in the state with the federal income tax PILOT.