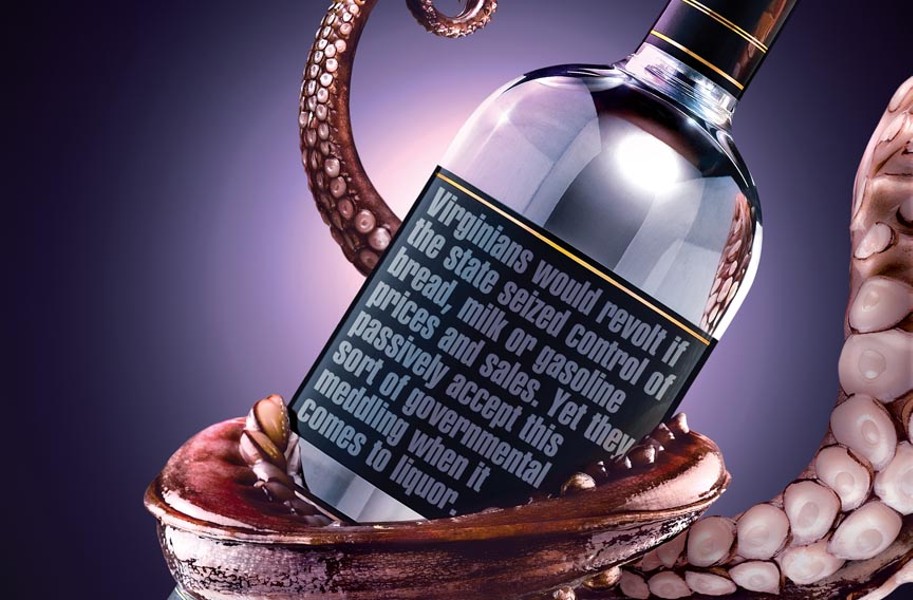 Now that the holidays are behind us and some of us are trying to squeeze into our skinny jeans, our thoughts turn to weight.

And how to get rid of it.

I blame the Commonwealth for this unfortunate state of affairs.

All right, not entirely. No one actually forces us to eat a pile of nachos with our margaritas.

But under Virginia law — which bans bars — an establishment that doesn’t push food on customers cannot sell hard liquor. So, in effect, the state urges us to eat when all we really want is to drink.

“We can decide if we want to eat food or not,” says Virginia Beach Delegate Scott Taylor, who’s filed a bill in the General Assembly that would slash the mandated ratio of food-to-alcohol sales in restaurants.

Alcoholic Beverage Control spokeswoman Kathleen Shaw explained it this way in an email:

“Only Virginia businesses that hold an ABC mixed-beverage license need to comply with the food-beverage (45 to 55 percent) ratio. (Mixed-beverage licensees also must meet the monthly food sales minimum of at least $4,000, of which no less than $2,000 must be in the form of meals with substantial entrees.)

“Businesses with only a wine and beer license do not have to comply with the 45 to 55 percent food-beverage ratio, but must meet the monthly minimum food sales requirement of at least $4,000, of which no less than $2,000 shall be in the form of meals with substantial entrees.”

Absurd. All of it.

Taylor’s bill would be a step toward sanity. It lowers the food requirement to just 25 percent of total sales.

And on the Senate side, Sen. Bill DeSteph has introduced a similar bill that would reduce the ratio.

I’ll drink to that.

In 2015, then-Delegate DeSteph presented a bill like the ones he and Taylor have hammered out for this session. It passed the House, but not the Senate, due to tireless efforts of lobbyists from Richmond restaurants that have huge food volumes during the day and morph into what some say are bars at night.

These opponents attempted to frighten lawmakers by painting a picture of Virginia becoming a seedy, crime-ridden place with “bars on every corner” if food ratios were reduced.

Taylor scoffs at those scare tactics.

“Washington doesn’t have food ratios and there aren’t bars on every corner there,” Taylor notes. “The market won’t support it.”

The market has nothing to do with the Prohibition-inspired laws that govern the sale of alcohol in Virginia. Thanks to the state’s stranglehold on liquor sales, prices are tightly controlled from Richmond.

When the price of booze goes up — as it did recently — restaurateurs are forced to hike the prices of food to keep the ratios in line.

Think about it: Virginians would revolt if the state seized control of bread, milk or gasoline prices and sales. Yet they passively accept this sort of governmental meddling when it comes to liquor.

“If you and I are on a date and I order a rail drink because I’m cheap and you order a top-shelf drink,” Taylor says, “the owner has to sell more food for your drink than for me.”

“How is that fair?” he asks. “We’re each drinking the same amount of alcohol.

“This penalizes places like martini bars that sell expensive drinks.”

If history is any predictor, opposition will be led by Senate Minority Leader Richard Saslaw.

Saslaw, 75, has been in the General Assembly since 1976 and is determined to maintain the status quo when it comes to liquor control.

His position has been that Virginians should be grateful Richmond magnanimously removed beer and wine from the ABC sales ratio in years past.

“If you can’t meet that ratio, you ain’t running a restaurant,” Saslaw said recently of the 45-percent rule. “You are running a bar. If you want saloons in Virginia, say so.”

We’re all adults here, so I will say so, Senator Saslaw: Some of us actually do want bars.

Most of all, we want the government to stop telling us to have a plate of wings with our martinis. S