Opinion: The Five Haunts of Richmond 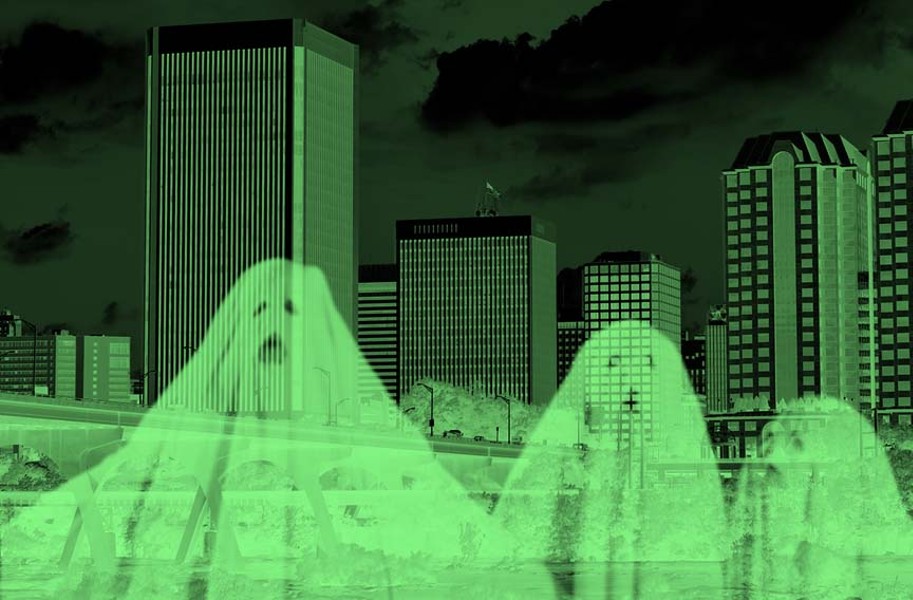 Each year at the dawn of the season of spooky I find it cathartic to open my eyes to what’s really going on in Richmond. As we already know from the plethora of normally mild-mannered Richmonders who pretend to pretend to be whores and cross-dressers the minute October is upon us — Halloween is a truth blurter. While the leaves flutter down our real selves bubble up.

For the city, showing its true self means acknowledging that this city is haunted, possessed and, at the very least, the home stomping grounds of every nefarious miasma known to man and the underworld. In case you’re new to town, let me introduce you to the cast of creepers you’re most likely to hear clanking and bumbling along the streets in coming weeks.

The Folk Fest Specter: Each hallowed season kicks off with the apparition of this mostly friendly haze that takes over the city, reminding us of halcyon days when we thought we could be a washboard-playing, gypsy-honky-tonk superstar. Fueled by bluegrass and echoing throat singing and klezmer in its path, the Specter leaves a trail of CDs promising to transform us into world citizens, or at least a future hip-hop ukulele prodigy. When the Specter wafts away after three brief days, we awake twirling in Monroe Park wondering where our grocery money went for the week. Deep inside, we know not enough of it went to the bucket brigade, the Specter’s accountants. The Specter hangs on in our hearts throughout the year any time we hear a go-go beat or smell that magic combination of gyros and popcorn.

Connecticut the Pissed: Some claim that Connecticut, the Native American torso rising up from the Lucky Strike building in Shockoe Bottom, is a sculpture by Paul DiPasquale that’s made its way around Virginia — including a memorable stint at The Diamond. Others, among them DiPasquale himself, know of the 1980s incident when Connecticut actually arose from the banks of the James to destroy the city as the city destroys sacred land.

How that destruction was temporarily averted is a legend for a different time, but a contract with the city, the Branch Museum of Architecture and Design and three formidable Church Hill grannies with baseball bats hold Connecticut to a four-week reign of terror ending Oct. 30 each year. (Connecticut has an annual Halloween party on Monument Avenue he likes to attend.) Connecticut’s press agent reports that this year’s ferocity will be flatulence-based and aimed at the Redskins’ Training Camp. Menace or hero? Hard to say.

Invasion of the Mayoral Body Snatchers: Because it’s an election year, we can expect the Invasion to buzz through like a cicada storm of “I beg to differ” and “How dare you?” debate exclamations. This menace begins with a civic-minded friend giving you a potted plant and a bottle of locally brewed craft beer. Does the plant keep moving closer to your bedroom every morning? Next thing you know, you wake up running for mayor or canvassing for a person you never heard of.
The lucky awake with a handful of pamphlets showing a kind-faced, well-meaning candidate. The unlucky come to consciousness wearing boxing gloves and delivering a left hook to a shocked stranger while bellowing, “He’ll fight for you, damn it!” Hell indeed.

Critters of the Crumbling Infrastructure: The above-mentioned are the usual suspects of the Richmond haunting scene. Sure they’re an inconvenience, but they bring character to the place. The truly terrifying are they-who-shall-not-be-named, whispered to be the Critters. They are faceless Frankensteins built from years of incompetence and greed with unsuspecting city workers as their pawns. They’re known only by the havoc they wreak. (And not the good kind of havoc with effortless free-throws fueled by the irresistible jams of the Peppas.)

This Critter delays your building contract indefinitely but won’t tell you why. Another petty Critter waits until the Monday before opening day to tell you that your gas meter is broken and won’t be repaired for a month. A sneering Critter is responsible for creating traffic-calming patterns full of attractive landscaping that it gleefully lets scorch and wither from lack of water.

School Hall Menace: The boogeyman of all Critters, naturally. With teeth made from old asbestos tile and smelling of painful historic busing errors, the menace runs unchecked from September to June. He’s big. He’s bad. And he’s responsible for climate control that runs amok if at all, bubbling toilets, mysterious odors that shut down entire wings, and the occasional missile of tile or plaster from a ceiling known to bonk an underpaid teacher who’s funded all the room decorations and most of the supplies from her own pocket. He’s a bad mama jama whose only dream is to make sure no Richmond child makes it to mastering calculus.

This is a terrifying mélange of ghouls and howlers. I apologize to those of you who will be experiencing them for the first time this year. But before you run away to the suburbs, I want to encourage you with the sweet comfort of knowing that at some point every Richmond resident’s fear turns into blasé resignation. The Demon of Apathy sees to it. When you can’t take the pain, she’ll keep you drugged and unaware. Until it’s your broken gas meter, your kid who won’t pee at school from bathroom disgust, your unpaved and potholed street, your ancestors taken for granted. Happy October! S

Alane Miles is a bereavement counselor, hospice chaplain and the host of Death Club Radio on WRIR-FM 97.3.