Welcome to public housing without the public part. It’s time to demand that RRHA provides more of a commitment to residents. 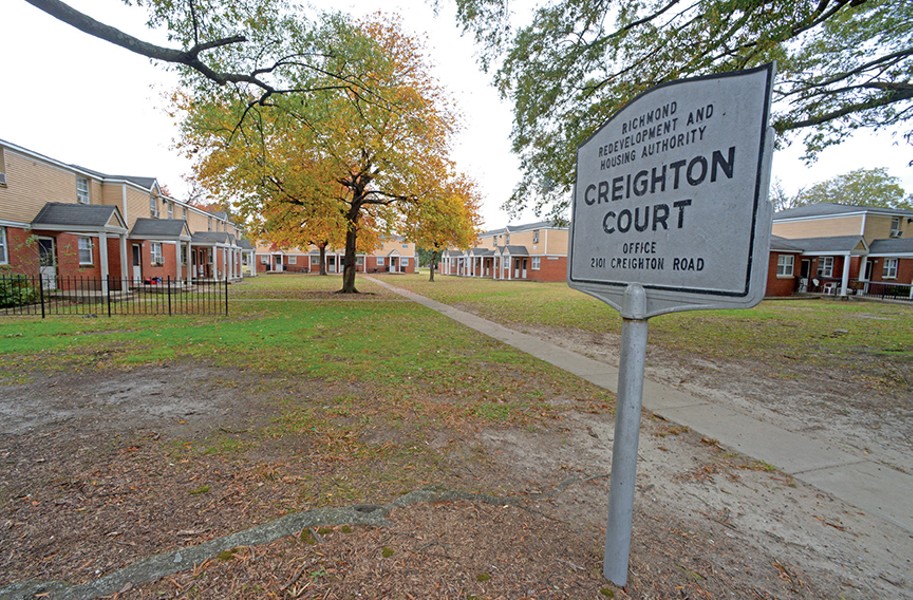 The Richmond Redevelopment and Housing Authority wants you to know that it is planning to transform Creighton Court. What it might be doing instead is abandoning the very idea of public housing.

Some background: RRHA is a regional authority – basically a local government that has the specific job of running Richmond’s public housing communities. It is, in fact, the largest such housing authority in Virginia with responsibility for over 3,000 units. Most of those homes are concentrated in the courts – six large-scale complexes, with four in Richmond’s East End.

Why do we have a whole separate government for public housing?

Well, on one level, housing is a highly technical endeavor, combining both property development and human development. From a different perspective, the issue of housing is easily understandable as part of the basic necessities of human life, enshrined as a human right in the United Nations’ Universal Declaration of Human Rights.

More and more localities are recognizing the dire need for affordable housing, which has reached the level of a national crisis. In economic terms, we have a supply and demand problem. Recent generations have recognized the advantages of walkable urban neighborhoods, but have intensified gentrification with no accompanying increase in housing. The tech and finance invasion of real estate, from Airbnb to mortgage-backed securities, has helped keep housing prices high, while always powerful developers are incentivized by generous tax abatements and restrictive zoning laws to favor sprawl over the density we need.

In the middle of a crisis, you need every tool in your toolbox to try to solve the problem. And yet what the authority is proposing to do with Creighton Court is to throw out the provision of public housing units entirely. It is as if, at the height of the pandemic, doctors pushed for vaccines and social distancing while abandoning the need for wearing face masks.

The plan for Creighton Court – and all of the city’s public housing units – is to largely turn it over to private companies to create mixed-use, mixed-income developments. The authority would no longer own or operate most of its housing stock, but instead would provide vouchers to lower income families. This is an idea promoted by the federal government and it has become the solution du jour even for some housing advocates. In the face of decades of national, state and local disinvestment and defunding of public housing, local governments are turning to the private sector for solutions.

But public housing projects like Creighton have become the homes of last resort for many families. RRHA has provided little in the way of assurances that the needs of low-income residents will be prioritized over the interest of private developers, who are notoriously draconian in their dealings with voucher-based renters. The authority has been vague on the number of units that actually will be kept “deeply” affordable and has provided no clear 1-to-1 replacement guarantee.

In many ways, this lack of commitment should be unsurprising. The authority’s previous leader, Damon Duncan, lasted barely a year on the job. While there, he played fast and loose with federal requirements and avoided transparency like it was another virus. Following his lead, RRHA has let leases expire without renewal. Despite a waiting list of over 3,000 families, nearly half of the units at Creighton are boarded up. Many of the residents have already been relocated, despite the agency not yet getting federal approval for redevelopment plans.

The authority’s indifferent treatment of the city’s public housing residents turns from troubling to tragic when one considers the longstanding history of urban renewal. The courts arose out of a longstanding pattern of displacement and relocation of Black city residents. Previously “transformed” communities like Jackson Ward may not have been perfect, but they were true communities with networks of social capital, business connections and neighborly support. As RHHA tears down Creighton Court after years of neglect, it replicates the crimes of past generations – sometimes to the very same families still recovering from the last wave of transformation.

The authority currently has an interim chief executive with no word yet on a replacement. It is technically run by a nine-member volunteer board, appointed to four-year terms by members of the Richmond City Council, who have shown little interest in getting involved in its affairs.

The authority just released its Annual Agency Plan, which includes a comment period running through July 2 with a virtual public meeting scheduled for June 9. Interested city residents could demand the authority’s leadership provide a more robust commitment to 1-to-1 replacement housing for displaced residents, instead of its more limited promises that are contingent on federal funding and the whims of private landlords.

The city’s public housing residents deserve at least that.

Richard Meagher teaches politics at Randolph-Macon College and is the author of “Local Politics Matters” (Lantern Publishing and Media, 2020).