by Dale Wolf and Jack Fechino 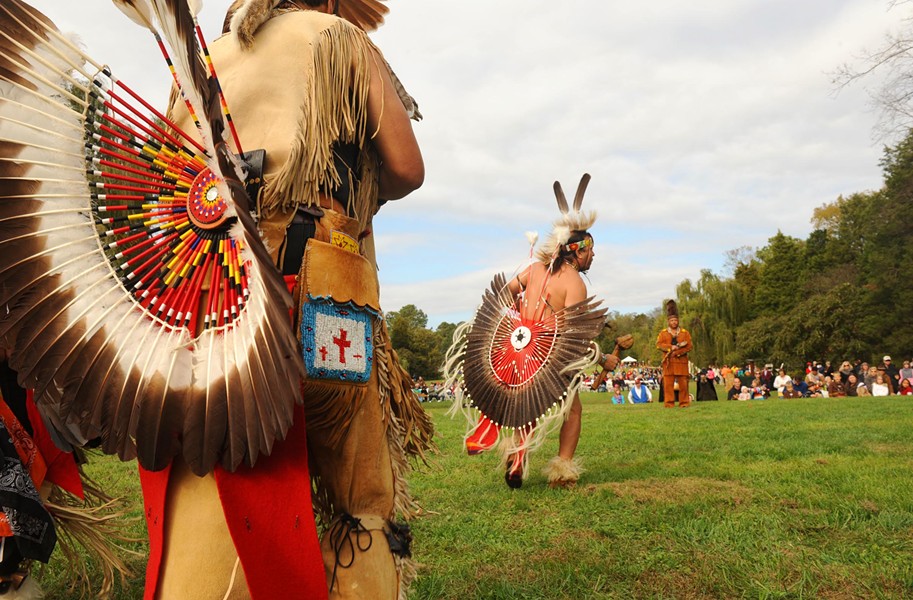 Scott Elmquist Members of the Chickahominy tribe lead a friendship dance during the First Thanksgiving Festival at Berkeley Plantation in Charles City County.

An unassuming sign along Route 60 and a tribal center on a humble plot of land largely obscured by trees are all that indicate the home of one of this nation’s most historic Indian tribes.

The Eastern Chickahominy tribe is distinct from the no-adjective Chickahominy tribe because of cultural disagreements dating back more than a century. But the two tribes are no different in one important aspect: According to the federal government, neither exists.

Sometimes the most powerful reminders of America’s continuing efforts to become“a more perfect union” involve no visible plight or cinematic struggles. If you drive down the road in New Kent County, to the area the Eastern Chickahominy tribe calls home, it’s difficult to see much of anything at all.

Last year, President Barack Obama discussed the astronomical poverty rate among Native Americans in an op-ed published on the website Indian Country Today. Obama declared that a poverty rate of almost 60 percent in some places, coupled with a dropout rate of close to twice the national average, constitutes a moral call to action. In 2012, slightly more than 6,000 American Indians lived in Virginia, representing 11 state-recognized tribes.

In February, U.S. Sens. Tim Kaine and Mark Warner introduced the bipartisan Thomasina E. Jordan Indian Tribes of Virginia Federal Recognition Act, named for the internationally recognized American Indian activist who died in 1999. In July, referring to the benefits of federal recognition, Kaine said in a statement that it would make the people of a given tribe “eligible for well-earned benefits including housing, education and health-care funding.”

In a recent email, Kaine elaborated on the situation faced by Virginia’s tribes: “Only the Pamunkey, who have a reservation that they can prove was granted to them in the 1600s, have finally been able to get the [Bureau of Indian Affairs] to acknowledge them,” he said. “We have gotten the bill out of committee and it is now pending on the floor. So we are looking for an opportunity to get it passed and over to the Senate.”

While further action on this bill looms, similar bills aiming to cover additional tribes in Virginia and other states have advanced from the Senate Subcommittee on Indian Affairs, but the full body has yet to hear them. If successful, then the legislation that Kaine and Warner introduced would grant federal recognition to half a dozen Virginia groups: the Chickahominy tribe, the Eastern Chickahominy tribe, the Upper Mattaponi tribe, the Rappahannock tribe, the Monacan Indian Nation and the Nansemond tribe. Unfortunately, efforts to get this law or something like it passed have been severely complicated by a relic of more prejudiced times.

The Racial Integrity Act of 1924 decreed that a child’s ethnicity could be described only one of two ways on a birth certificate: “Caucasian” or “Negro.” The law has long since been stricken from the books, but cannot be removed from history. Its effects make it difficult for the aforementioned half-dozen tribes to prove their ancestry. The Bureau of Indian Affairs has strict criterion that must be met for recognition.

Chief Gene Pathfollower Adkins is eager for the Eastern Chickahominy’s status to change. It’s a distinction that promises tangible benefits for his people. “Our tribe doesn’t have scholarships,” he says. “We don’t have money for it. That would be the biggest thing, if we could get scholarships for our kids to get into college.”

His wife, Arnette Redwing, raises an even more immediate issue: the continuation of the tribe’s culture. “I must say the younger generation is not into it as much as the older generation,” she says. “Native American was taught in my home. My grandchildren are not interested in it.”

If the culture of Native Americans is neglected for long enough, if the tribes to be covered by the bill are left without federal recognition for long enough, then eventually the sun will rise upon a day that features nobody left who cares. That would be nothing less than a cultural extinction.

The Eastern Chickahominy tribal center was constructed, and the land it sits upon was purchased, with all the money the community could raise. After an operation of that magnitude, there isn’t enough left to hire educators. Your particular flavor of this nation’s culture might be misinterpreted, appropriated or unfairly portrayed — but odds are, it isn’t in danger of dying.

Redwing is blunt about the need for money. “Everything that’s done is through fundraisers,” she says. Federal recognition would make those less of a necessity. Adkins is on dialysis and often is too busy with fundraising to help teach younger members of the tribe their history and culture.

“We were there when the settlers came to Virginia,” Redwing says. “We were there to welcome them. All of the tribes were there.” Chickahominy bowmen brought John Smith to Chief Powhatan in 1607. It was their assistance that allowed the settlers to survive their first year.

The country’s educational system does its people no favors. Redwing speaks of visiting schoolchildren and having to tell them that Indians no longer live in teepees or wigwams. She doesn’t blame the children, recognizing that the requisite history “is not being taught.” Instead, she spreads a simple message about the modern day condition of her people: “We live just like you do.”

The Commonwealth of Virginia recognized the Eastern Chickahominy tribe in 1983. “We have rights just like every other person,” Adkins says. “We have all the same rights.” S

Dale Wolf and Jack Fechino are members of the Maggie L. Walker Governor’s School class of 2011. Wolf will graduate in December from the College of William and Mary, and Fechino is a June 2014 graduate of Virginia Commonwealth University.