At this stage, the only real question is who should decide whether a monument stays, goes or is contextualized. 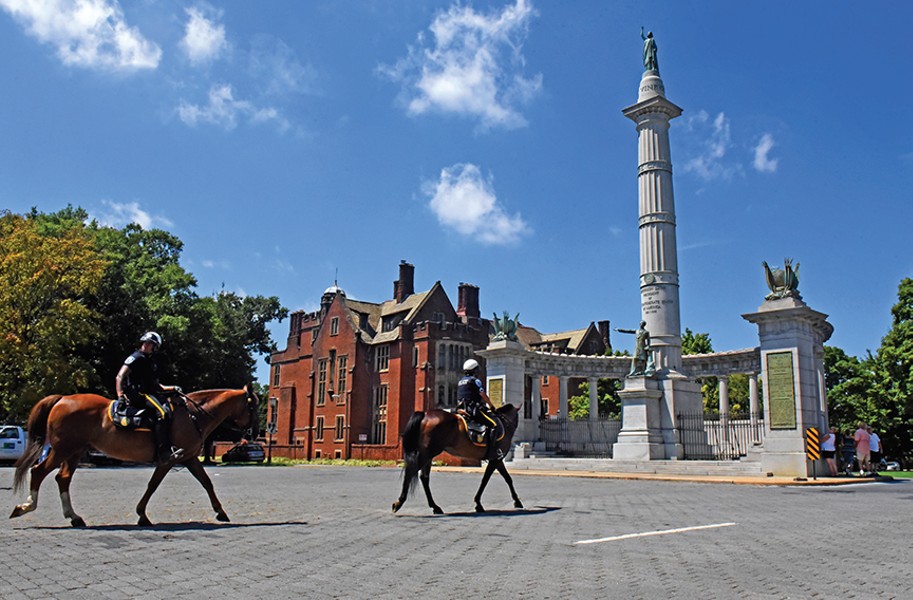 If a civic monument becomes offensive to a community, eventually it should be and will be removed. Times change, public sentiment changes and civic monuments ultimately are reflections of public sentiment. And, beyond a certain point, further public debate about something as subjective as feelings about a monument has a limited effect upon public opinion.

We have reached that point regarding the Confederate statues on Monument Avenue.

The continuing argument over the fate of the monuments has long since become repetitive and tedious. At this stage the only real question is: Who exactly should decide whether a particular monument should stay, go or be contextualized and by what process should the decision be made? Opinion on the monuments themselves always will be sharply divided, but in theory at least, we should be able to agree on a fair and democratic process to determine what course to follow.

Proponents of removal assume that the governing body of the locality in which a monument is located should decide. Opponents favor leaving the decision at the state level. Both positions have serious drawbacks from the standpoint of fairness. Municipal boundaries are frequently the product of historical accidents and do not necessarily encompass the entire community in which the monument is located. The boundaries of Richmond are particularly arbitrary and disconnected from social and economic reality.

If only voters who reside in the city are allowed to decide the fate of the monuments, people who live nearby on Monument Avenue in Henrico County and pass by the monuments every day will have no say, while residents of far South Richmond who don’t travel on Monument Avenue from one year to the next will get a vote. Is that fair? On the other hand, if it is a state-wide decision that brings in residents of Big Stone Gap and Crystal City who have only a very attenuated interest, and it certainly seems unreasonable to give them a say equal to that of local residents.

The reality is that different civic monuments in Richmond have different groups of stakeholders. The Capitol Square monuments and the Lee monument are obviously of statewide concern and to remove or contextualize them should require state action. It is equally clear that the Columbus monument in Byrd Park is within the exclusive purview of the city. The monuments on Monument Avenue, other than the Lee monument, fall somewhere in between. Residents of the Richmond area should have a say, but not everybody who lives in the state.

There is no perfect definition of the Richmond area, but the Greater Richmond region or area is generally considered to consist of the Richmond Metropolitan Statistical Area, which includes the city and surrounding counties and cites, with a population of approximately 1.3 million. Only about 18% of the residents of the statistical area live within the city limits.

I submit that this area much better reflects the true stakeholders who should decide the fate of the monuments than city residents alone. It is true, of course, that city taxpayers currently bear the entire cost of maintaining the monuments. But that cost is minimal and is greatly outweighed by the value to the city of the monuments as tourist attractions. What is far more important is the emotional and symbolic meaning of the monuments to different people, which is not dictated by local political boundaries.

That leaves the question, by what process should the will of the people of greater Richmond be determined? The statistical area does not have a representative elected body. Even if it did, monuments that have endured for more than a century probably should not be removed by temporary partisan majorities. The best expression of the considered judgment of the public would be in the form of a referendum. Further, it should be a referendum devoted solely to the monuments. If it is on the same ballot with elections or other referendum issues, many of the voters would be focused on those other issues, and the result could be decided by voters who don’t really care about the monuments one way or the other.

It is not asking too much to require the voters who decide whether monuments should be removed to go to the polls for that purpose alone.

Following the procedure outlined above would not insure a wise decision on the fate of the Confederate monuments. It would, however, make for a decision more reflective of the considered judgment of those most affected by that decision. And a process generally perceived as fair would make it more likely that the result would be accepted by both sides.

Jon Jewett is a lawyer residing in Ashland. He was born at Stuart Circle Hospital.