It’s about time the General Assembly passed noise bills. Now it’s time to enforce them on the roads. 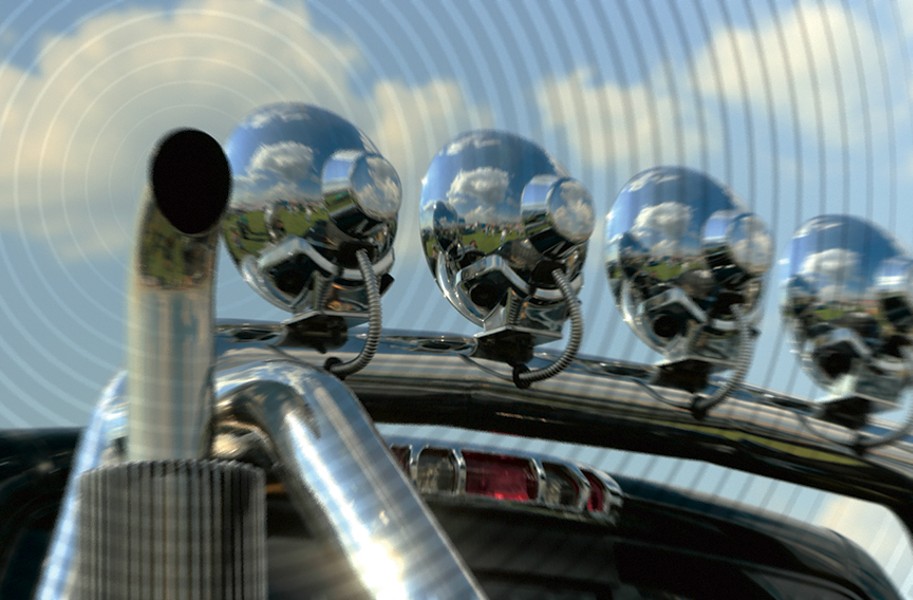 In October, Virginia will grant municipalities the power to enact and enforce noise ordinances. Fines may follow.
It’s high time.

Were we talking in person, I would have to shout this news, since you might not be able to hear anything over a black pickup lifted until the roof is 8 feet off the ground, fouling the air out of an exhaust tip the size of a grapefruit. Such trucks, nicknamed brodozers, and loud motorcycles seem more common than ever these days, for reasons unknown. While Americans have long preferred large vehicles, the taste for really loud ones has been a niche form of rudeness since the days of the Model T.

Before readers dismiss my support for noise ordinances as the glee of a nanny-state green activist, I should explain that I love performance cars. A fond childhood memory was my dad being arrested for drag racing. Mom would not go his bail, so to jail he went. He did buy the Pontiac that beat him. Nowadays in my spare time I write for the industry, where my ideas about reducing noise have attracted some scorn from the loud-tailpipe crew. Yet at Richmond Dragway on Street Fighter Friday, I enjoy the roar with earplugs. Everything from stock Subaru WRXs to vintage, heavily modified Camaros and Mustangs run, as do motorcycles so fast that they seem like SpaceX side projects.

As a kid, to me nothing sounded sweeter than a real Street Hemi or 454 Chevelle. I was just at a light behind a Corvette Z06, a car that sports four tailpipes. It rumbled nicely and did not scream. In 2015, I even began building my own Sleeper performance machine mostly by myself, and it’s a ride with plenty of horsepower. Yet it was not loud once I got true dual exhausts and headers installed. It won’t make the livestock have heart attacks or annoy those living by a busy road.

The facts about hearing and noise are well known. The Centers for Disease Control and Prevention provide clear guidelines. Prolonged exposure to more than 90 decibels is likely to cause hearing loss. Many motorcycle engines rate that, though of course, helmets protect riders and with increasing distance, those close by will be less likely to suffer harm. Any sound above 140 decibels, such as a nearby gunshot or my teenage headphone time with Kiss and Black Sabbath, can cause immediate damage to hearing.

The brodozer truck or muscle car? It might produce 110 decibels if it’s going fast and has a modified exhaust system. At 50 feet, an unmodified medium truck can generate 85 decibels. In contrast, Dodge touts its 2020 Ram as making about 67 decibels of noise, although that is for folks inside the truck. The company says nothing about the cyclist or pedestrian nearby. Car and Driver tested a 2019 Ford Raptor, and it emitted 88 decibels of noise pollution.

Multiply some of these figures by lots of vehicles passing down a crowded street, with their exhaust systems modified. Consider the sound systems on some motorcycles that broadcast the music the rider is playing, at top volume, towards you.

Then wonder why we have to shout to be heard.

Perhaps we hear all this rolling thunder because electric vehicles are coming, often needing noise added to protect pedestrians and animals in their path.

Is all this noise on public roads a final cry of rebellion? If so, get over it, speed racer. Go find a track to drive fast and furiously.

When I used to street race with a friend who owned a former police interceptor packing a four-barrel Plymouth Super Commando 440, we went fast without being quite as loud as what I hear today. We were still obnoxious, of course. We were teens, embarrassing, gutless ’70s Camaros and Mustangs, but strutting has always part of the street-racing scene. Yet there was a time, not so many decades ago, when local cops would pull anyone driving a muscle car making too much racket, issuing an order to have the exhaust back to stock within a few days. I know this because a buddy had his really swank, fire-breathing, pavement-tearing, fake-wood-grain, four-cylinder Vega wagon flagged by a motorcycle cop.

He was infuriated. Off came the Cherry Bomb muffler from Pep Boys – the store would not take it back. We all said “Dude, you are trying too hard. That ain’t no GTO.”

At the drag strip, most things are permitted in certain classes of racing. But why should hazardous levels of noise pollution remain street legal? We have enough rage, on and off the roads, already. I want to thank the General Assembly for passing the bills about noise and now it’s time for residents to pressure local officials to enact and enforce penalties.

If we are indeed entering the twilight of the internal-combustion engine for most vehicles, so be it. A mostly electric future will not only help the planet, as long as we don’t “roll coal” to generate all the juice, but may let my neighbors sit on their front porches again on Fridays and Saturdays.

Joe Essid teaches writing at the University of Richmond and writes about car restoration and hot rods for Hemmings Motor News.