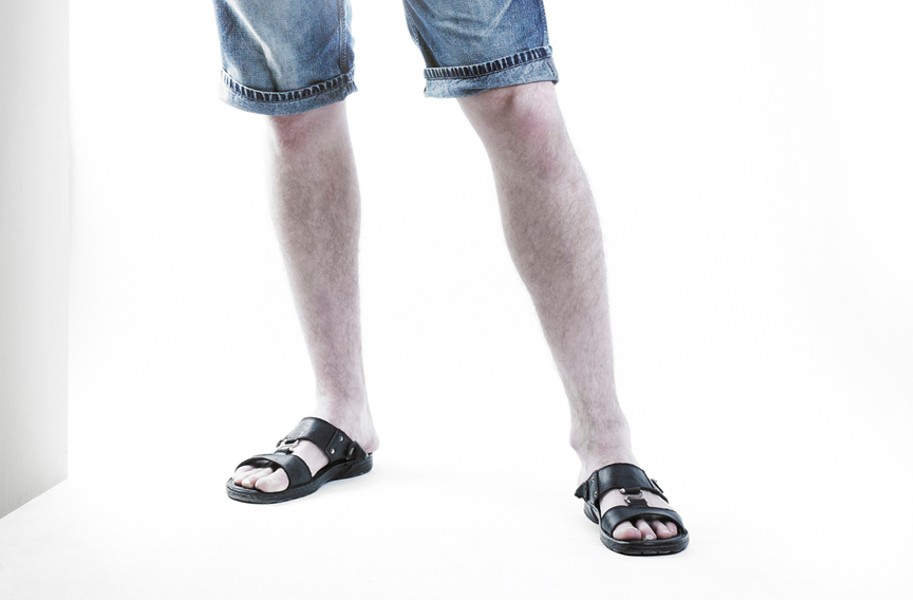 The slimy, sticky, hot weather is upon us, and with it the high season of males dressing terribly. I realize that getting Americans to dress more formally is about as likely as a Guy Lombardo revival. “Mad Men,” for all its brief cultural influence, didn’t get men to peacock around like Don Draper.

As critic and novelist James Howard Kunstler has written many times, American males today too often look like overgrown toddlers. We have fallen a long way, even by the standards of 1990s Casual Day in the land of office cubicles.

If you doubt this, go to any big-box store on weekends during the warm months. Look at any male between the ages of 5 and 60 in ugly plastic sandals, cargo shorts below the knee, untucked T-shirt, and a baseball hat pointed the wrong way.

Yes, I am talking to you, mister.

Draper up and dress like a man, not like a 6-foot-tall toddler. By the way, your girlfriend or wife looks like she’s ready to go to yoga class. All the time. But my disgust will be confined to my own gender.

We need not be slovenly to be comfortable. A couple of years ago, after getting myself involved in yoga, I started looking better in dress clothes. I’d been teaching my university classes until then in polo shirts, khakis, even jeans. But suddenly, I looked in the cedar closet at the tweeds, the summer-weight blazers, the Brooks Brothers shirts, the silk-screened, handmade neckties that I rarely wore.

Partly, I wanted to costume myself as professors of yore when they went into deadly battle against the dangling participle and other banes of the good life. Even Albert Einstein, for all his flyaway hair, usually could be found in classroom or lecture settings in a blazer and tie (askew, of course) or one of his famous sweaters. William Faulkner sauntered around Charlottesville in a rumpled suit and top coat. Never, once, have I seen either of these Nobel laureates in a T-shirt. More important than aping my heroes, however, I wanted to make a statement about what a nation of slobs we all have become since the late 1960s.

More casual colleagues ribbed me with remarks like “Good clothes all dirty?” or “You need a pipe with that tweed.” Even my yoga teacher got into the act, the first time I showed up for class suited and tied. The teacher said, “Well, look at Mister Fancy Pants!” She said it again the following week. I bit my tongue and held back a snarky reply, knowing better than to mess with a yogini who gives you commands. You might end up with your asana in a pretzel.

As I continued to dress like Mister Chips, mission-creep began. For all my love of black T-shirts and jeans, I started wearing a tie and sports coat for Christmas and Thanksgiving dinner, lightweight shirts and slacks, never shorts, to warm-weather parties held indoors. I launched a concerted propaganda campaign. When told “Oh, you didn’t need to dress up,” I replied, “This is not dressed up.”

I somehow still get invited to parties. So far, one colleague has joined me in dressing up to add gravitas to classes. My motto? “Today in the classroom. Tomorrow, the world.”

I concede that it’s no longer the 1930s and ’40s, a time documented by photos in my family album showing relatives in coats and ties or formal dresses in the middle of Richmond’s summers. I do own shorts, T-shirts, and casual items and wear them in the garden, at the beach, to outdoor cookouts, and — minus the baseball hat — to yoga class. Sweat pants are an abomination and flip-flops are shower shoes to me, so I put on leather Mephisto sandals or similar. Women can show off their pedicures. But a self-respecting man should keep his toes under something solid, point his hat brim forward, and tuck in his shirt unless he’s mowing the lawn. In the hottest weather, when I mow several acres of field and rake hay, I give in to cargo shorts and a sleeveless T; in our summers, farm coveralls are best kept for brush cutting.

My urge for the sartorial splendor of the past isn’t snobbery, though once such a desire often was a way to look down one’s nose at others. I can recall a friend forbidden to wear jeans. To his upper-crust parents, dungarees were for cowboys and factory workers, not First Families of Virginia aristocrats.

Now we’ve gone so far the other way that wearing denim seems overdressed, in some cases. Holdouts like me exist. Amid a sea of short-pants contractors, Danny, a country boy through and through, wears jeans all summer on roofs and in crawl spaces. When I ask him about it, he replies: “Little boys wear shorts. Jeans are work pants for men.”

Be like him, lads. Try dressing adult some time. My family and yours dressed up in summers that were slightly cooler and less humid than on our hydrocarbon-fired hothouse of a planet, but we have air conditioning they lacked. Perhaps they were tougher when it was time to sweat. We are wimpier in so many ways than our grandparents that I hold out very little hope we will change, especially as human-caused climate change extends the sticky months into what once were spring and fall.

Flip-flops and baggy shorts were already a glimmer in his eye. S

Joe Essid teaches writing, in coat and tie, at the University of Richmond.