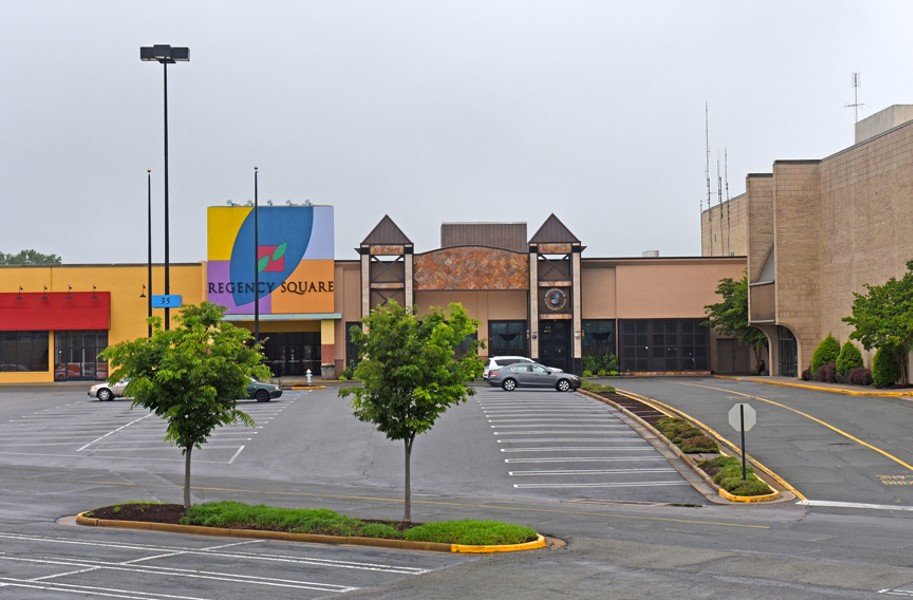 Henrico County’s once-upscale Regency Square Mall evokes a vastly different image than it did 40 years ago, when it put another nail in the coffin for downtown retail.

Back then, I was a sneering 20-something who listened to punk rock and read dark indie comics with names like Slow Death, so I looked forward to the apocalyptic end of the suburban cancer slowly killing the pastoral landscape around our city.

Everything about the tomblike enclosure of the windowless mall sneered back, both at downtown and anything outside its consumerist interior.

I dreamed of Regency in ruins.

Now I have my wish and don’t relish it. In fact, I’m rooting for Regency’s survival. But the odds of a comeback are long.

Unlike the still-vibrant mall of the 1980s, today’s Regency looms prisonlike in dowdy faux sandstone, like some abandoned site from that decade’s Chernobyl disaster. I can almost spot Mikhail Gorbachev, waving to a phantasmal May Day celebration from Regency’s brutalist parking deck.

I felt these ’80s ghosts recently when I had, believe it or not, occasion to go to Sears several times for a few parts to repair a Craftsman mower. I’m no spring chicken, but I was the youngest person in the store, or mall, who was not employed there. All the scene lacked were tumbleweeds. The manager seemed happy to have the company.

Regency could reinvent itself as a middlebrow shopping destination, as Willow Lawn has done so well, but it will take a larger wrecking ball than the one that restored Willow Lawn to an open-air shopping scene.

Regency could not be remade that way. The bones of the place were laid down to accommodate inward-facing stores on two levels and not the faux, quasi-Mediterranean village that Short Pump or Stony Point ape. What’s more, Regency’s fading fortunes reflect something bigger than tragically poor design. Fill your computer’s search engine with the words “Sears” and “decline,” and you’ll find a host of articles linking the fate of a former commercial juggernaut to the decline of our middle class. It may be hard, sitting in Regency Square’s desolate parking lot, to envision the Sears store there vibrant with new customers. Or J.C. Penny. Or anything beyond lunch hour at the food court.

Places such as Regency Square once provided venues for the currently rigid American economic castes to mingle, with West End elites heading to La Vogue and Schwarzschild while the rest of us hit Hip Pocket for a sale.

Nowadays, the working poor and our vast populace of the downwardly mobile can gape at Swarovski crystal or Omega watches at Short Pump, but must drive far to find the equivalent of Toughskin jeans or Fruit-of-the-Loom undies in the new fake-urbanist meccas of suburban commerce. There simply are no mixed-caste retail centers left; today segregation is less about race and more about whether you shop at Wal-Mart and Dollar General or Whole Foods and Brooks Brothers.

To make matters worse for brick-and-mortar retail, my millennial students buy hardly any physical goods in a store. They patiently explain to me that with online retailers offering free shipping and returns, even high-end clothing can be tried and sent back endlessly. Millennials do so without looking up from their phones at Starbucks, as they sit with friends who are on their phones communicating with other friends who are not at Starbucks. In fact, the provision of lattes, burritos, dental work and pedicures seems to be the future of retail strips. Near my doctor’s office off Glenside Drive, an entire new shopping center sells not one durable good beyond a pilates ball. Every storefront promises a massage or facial, a cup of coffee or a sandwich. Millennials cannot yet order those things online.

Amid such revolutionary changes, Regency Square itself hunkers down as a disco-era relic in a sea of cracking asphalt, its oppressive ramparts, so naked without a sea of cars around them, providing a perfect location shoot for a zombie-apocalypse film. All you need to make the setting complete would be some blowing trash and a burned-out car or two. Instead, the emptiness suggests a worse apocalypse still, since the living dead at least provide a populace of sorts. The mall looks like the end of man, the desolation left after homo sapiens went extinct.

I have a few suggestions for Regency that no sane person would adopt but that would be the coolest thing since micro-brewing took Richmond by storm. First, we could have Burning Man East there, once per year, and for the other months host a commune of do-it-yourself, steam-punk artisans constantly dismantling and rebuilding the former mall into ever stranger forms. The parking lots would be dug up for communal gardens, livestock pens and a dock for airships.

Letting the site rot would be another fascinating project. When Azalea Mall died, the buildings were razed but soon a second-growth forest appeared. The owners continue to clear-cut the lot every decade or two, but that costs green money. What about simply building a wall with observation points and letting Regency collapse? Academics like me could rent spaces for moody writing studios among the ruins, after signing a waiver of course against falling Sheetrock or aggressive rodents. My colleagues in biology could study how flora and fauna would repopulate a world without shoppers.

Finally, we might build a baseball stadium there for a minor-league team.