Why targeting black clubs in the wake of recent violence could backfire. 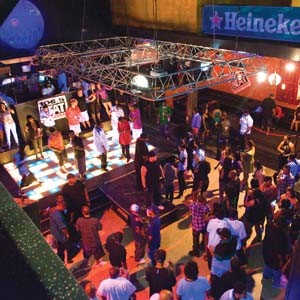 Gary Murray had visions of Miami on Broad Street. After spending two years soaking up the South Beach nightlife, the 28-year-old real estate developer from Philadelphia finally took the plunge in the summer of 2008. Murray moved to Richmond 2007 and dumped $300,000 into 19 W. Broad St., renovating it into a sprawling, neon-tinged restaurant and nightclub.

He called it Club Rendezvous.

Murray quickly realized that Richmond wasn't ready for such diversity. He struggled to draw customers, and found himself struggling to survive. “It took me two years to figure out in this town that you are either a black club or a white club,” he says. “They want you to make a decision.”

Last Thursday, a decision was made for him. Facing 11 liquor-license violations following a spate of teen parties that, local politicians and Richmond police say, led to violence in the streets afterward, he surrendered his state Alcohol Beverage Control license and closed the doors. Ironically, his club lost its ABC license after two separate underage events at Rendezvous — where no alcohol was served — and hundreds of mostly black teenagers spilled into the streets, erupting in fistfights and gunshots. “I rented the club to those guys for a thousand dollars,” he says of teen party promoters. “Who knew it was going to turn into a shit show in the streets?”

In the wake of club-related violence at Rendezvous and in Shockoe Bottom, where two recent murders have drawn heightened police presence and political scrutiny, Richmond is in an uproar over what people perceive as unregulated, unruly city nightlife. Some business owners on Broad and in the Bottom want the city to shut down offending nightclubs. Mayor Dwight Jones introduced a new ordinance at Monday's City Council meeting tightening restrictions on nightclubs and promoters.

But some people say the problem simply can't be regulated away. It's a cultural issue, rooted in economics and deep racial divisions.

“People scream, and the idea is to close the club down and then the problem goes away,” says Thomas “Fat Thomi” Hairston, owner of X Records in Richmond. “Until you start providing activities for the kids, this is never going to go away.”

On the surface, it may seem to be an obvious, easy fix: Close down the clubs where the mayhem originates. But blaming violence in the streets to a particular club or group of clubs is legally impossible, if not morally sketchy. What's more, such a strategy does little to address the root of the problem.

“Kids are going to congregate somewhere,” Hairston says. “What the city needs to do is meet the situation head-on. We have to police events we create.

“Until we address the issues and the way that we look at the kids and decide we are going to teach and educate instead of lock up and demean,” he says, “then we are always going to have a problem.”

Nat Dance, owner of Club 534 on Harrison Street near Virginia Commonwealth University, says police and politicians don't realize that urban teenagers simply haven't been taught what's expected of them. The elimination of events, such as teen parties and school dances at earlier ages, creates problems down the road. By the time they reach 21, they've had little experience with nightlife, which makes matters worse.

“They are not quite developed,” Dance says. “They have no order.” Instead of banning teen parties and shutting down urban clubs, Dance says, why not use such actions as incentives? Police them better, regulate promoters and require school IDs at the door.

“This is a better tool to use to actually get them to do better in school,” Dance says, adding that some kids would rather go to jail than be denied access to the club. “You ban them from the club it breaks their heart.”

In fact, it's often those who have been denied entry who cause the problems in the streets. Club owners say it's not uncommon for someone who's been turned away to become angry and return later to cause trouble. Rendezvous' Murray says a young man who fired his gun in the alley April 2, during the First Fridays Art Walk, was someone who had been turned away at the door.

Murray says an employee of his was taking the trash out, and saw a “dirty little boy” pull out a gun. The boy told the employee he wasn't going to shoot anyone and simply wanted to unload his gun in the air, Murray says: “He definitely wasn't in the club.”

Still, who did or didn't enter the club and who did or didn't instigate a fight or a shooting isn't the point, some Shockoe Bottom business owners say. In a city such as Richmond, where the perception of violence can be crippling, the recent shootings in the Bottom have severely impacted business there.

“Who's going to come down here when they think people are shooting each other in the streets?” says David Napier, president of the Shockoe Bottom Neighborhood Association. “A lot of people have their heads in the sand right now. The clubs are advertising to specific patrons, with specific types of hip-hop that draw a bad crowd. Some of it is not within control of the clubs, but they are not accepting responsibility for any of it.”

Others say it's the surrounding business owners who aren't accepting the economic realities of Richmond's nightclub scene. In a depressed economy, it becomes increasingly difficult to turn away certain promoters who can bring in large numbers of patrons, who just so happen to be young, black and consumers of hip-hop.

Murray says he finally gave in to the reality a year ago. He'd witnessed the racial realities of Richmond firsthand. He recalls the subtle differences between black and white bartenders, for example. If a white bartender was working, white patrons would sometimes venture in. But if the bartender was black, he says, “I've watched middle-aged [white men] walk by the establishment, stick their face in the glass, and walk by.”

So when one of the city's most popular urban promoters, FaceJay Promotions, came calling in April 2009, Murray opened his doors. The All White Affair, an urban event where patrons are encouraged to wear all white, drew 900 people. It was the biggest moneymaker Murray had ever held. There were no fights, no incidents and the club was filled almost entirely with black customers.

“It kind of opened my eyes,” Murray says, en route to finish moving his club's belongings last week. “I was really turning away a lot of minority promoters but at the same time I was forcing myself to starve as a business.”

He had to make a decision: Would Rendezvous become a white club or a black club? To survive, Murray chose the latter.

“I realized that it was too much change for me to be able to do it,” he says of implementing his plan to become a diverse, multicultural destination. “I couldn't change the way Richmond was alone.”

Correction: In earlier print and online versions of this story, Style listed the wrong date for the shooting incident in the alley behind Club Rendezvous. The shooting took place on April 2, during First Fridays Art Walk.