Special/Signature Issues » Beauty on the Boulevard

The new VMFA will be nothing like your grandmother's art museum. 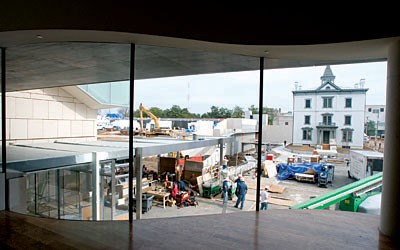 “The point of the renovation was to be inclusive rather than exclusive,” says Peter Culley, the onsite director for architect Rick Mather. “The architecture is all about transparency from the outside to the inside,” museum director Alex Nyerges adds.­ “People can see in and see out.”

AT A VIRGINIA Museum of Fine Arts opening for an Indian art exhibition some years ago, a woman of a certain age skeptically surveyed a colorful buffet table. It was laden with curried dishes and other exotic Eastern delicacies. The caterer may have been creative, but something was amiss for a woman who'd attended museum receptions for decades. Disoriented and verging on panic, she eyed someone familiar: “Jack, Jack!” she pleaded in a quivering Southern lilt, “Where're the ham biscuits?”

Come May 1, ham biscuits may, or may not, be served at events surrounding the grand reopening of VMFA, but rest assured that visitors won't find their grandfather's art museum near the intersection of Boulevard and Grove. What opened in 1936 in the midst of the Great Depression as a fledging, state-owned institution with a sparse collection housed in a modest but elegant European palace-inspired gallery, has grown into the nation's 10th largest art museum, one that strives to become even more welcoming, egalitarian and with-it.

The reopening will reveal that the museum has embraced its entire 14-acre tract with a $204 million expansion that includes a major new wing, an impressive sculpture garden, a 600-space parking deck, new eateries and a complete reinstallation of its holdings. Visitors will enter through a modernist pavilion designed by London-based Rick Mather Architects. This fifth major expansion in 75 years has produced a markedly lighter structure from earlier wings. Broad expanses of clear and frosted glass are designed to make the museum enticing from the Boulevard. School buses will unload students in a new motor court near the front door. And after dark the museum will glow from within. It will be a big tease.

But more importantly, visitors also will find the museum's international range of collections reinstalled to reflect a progression of time and cultures: This logical loop should keep patrons from falling helplessly, as in some museums, into a labyrinth of time, space and sensory overload. If this is achieved, consider this “new” VMFA a generational achievement for a beloved and respected institution that's grown far beyond what its founders could have imagined.

Above, the museum not long after its 1936 opening and, below left, in more recent days. “Nicknamed ‘Fort Art,' the museum is a bunker-like agglomeration of ill-matched structures,” the New York Times wrote in 2003. “The museum's facade, on a leafy boulevard lined with Victorian houses, has no functional front door.”

THE MUSEUM'S ORIGINS date to 1919 when John Barton Payne — Virginia native, Chicago lawyer and Washington player (he served as Woodrow Wilson's secretary of the interior and later chairman of the American Red Cross) — gave 50 works of art and $100,000 to the Commonwealth. He stipulated that the state match his funds to build a museum. Matching monies weren't forthcoming until 1932 when Gov. John Garland Pollard passed the plate. Pollard also set in motion construction of a building using a Works Progress Administration grant — the federal stimulus funds of that era.

A state-owned tract of land fronting the Boulevard in Richmond's West End housed a Confederate veteran's home sponsored by the Robert E. Lee Camp of the United Confederate Veterans. As vets died the facility shrank accordingly. Pollard believed the remaining veterans and an art museum could co-exist. But this was considered sacred ground by many Richmonders and, well, art museums weren't something Virginians cared much about. New York, Philadelphia and Boston may have established such institutions in the 1870s, but hadn't Richmond done fine without one?

A compromise was to place the museum in the farthest corner of the large block near Boulevard and Grove. This decision would prove challenging for future expansion, especially for a classically inspired, symmetrical building. The original museum took its architectural cues from a wing of Hampton Court in England, a palace designed by Christopher Wren. VMFA was designed by Peebles and Ferguson, a Norfolk firm that had established itself as a go-to firm for state projects. In the 1890s it had designed major projects at the University of Virginia; in 1905 John Kevan Peebles consulted on expanding the Capitol and worked on projects for the 1907 Jamestown tercentenary exposition.

Peebles and Ferguson designed a Roman temple-front structure in the Ionic order. Visitors approached the building via a series of brick terraces and entered a stone-paved lower lobby. A red-carpeted staircase led to the galleries, which were arranged on a single axis. Exhibitions were modest in scope.

During World War II when the museum's director, Thomas Colt, was in the service, Pollard's wife, Violet, became interim director, curator and docent all-in-one. When the occasional visitor entered, she'd go to the galleries to greet them. One day, she recalled later, when an Allied exchange show was hanging with Soviet “workers unite” art, she welcomed two ladies.

“Not really,” was the off-putting reply from one of the ladies. “Someday you'll see some real Russian art.” The cryptic reply revealed its message in 1947 when the lady who'd made the remark, Lillian Pratt of Falmouth, made a gift of spectacular bejeweled objects crafted by the workshops of Peter Carl Faberge.

In 1947 the T. Catesby Jones collection of modern art was given to the museum, and a few years later, holdings in European art from Adolph D. and Wilkins C. Williams and from Arthur and Margaret Glasgow entered the collections.

In 1948 Leslie Cheek Jr., a wealthy architect and art historian from Nashville, Tenn. (his family owned Maxwell House Coffee) left a position at the College of William and Mary to become the museum's director. His shadow still looms positively across the institution. While he was meticulous and mercurial, he created imaginative and memorable exhibitions. With his energetic wife, Mary Tyler Freeman (a Richmonder and the well-connected daughter of the historian and newspaper editor Douglas S. Freeman), they were a first couple of the arts locally and took entertaining to an art form. Because the Cheeks carried themselves as a tad superior the state-owned museum was tinged with an elitist aura despite its modest collections. But the brilliant museum director created a series of statewide chapters and an art museum on wheels that visited far-flung communities, and offered a regular series of exhibitions that showcased Virginia artists, architects and photographers.

IN 1970 THE south wing of the museum was completed beside Grove Avenue. This brought balance to the 1936 building and the north wing. Soon thereafter plans were under way for an expansion farther north. Designed by the Warren Hardwick architecture firm, this wing, opened during the directorship of James Brown, was never embraced. The oval gallery walls had to be reconfigured for most exhibitions, the entrance was subway stationlike and the hard-edged sculpture garden and fountain by celebrated landscape architect Lawrence Halprin was underused.

A permanent fixture in the new wing, however, was an art nouveau collection given by Richmond collectors and Best Products founders Sydney and Frances Lewis.

Meanwhile the Lewises were also collecting Arts and Crafts furniture and objects as well as amassing contemporary art. Although courted by such institutions as the Whitney Museum of American Art and the Museum of Modern Art in New York and by Norfolk's Chrysler Museum, during the museum administration of Peter Muse, Gov. John Dalton helped keep the Lewis collection in Richmond. He introduced the Lewises to Paul and Bunny Mellon, and together they were benefactors of a new west wing to house the entire Lewis collection and the Mellon's British sporting art and French works.

With the museum campus now built out as far as it could go west the new facility extended the museum along Grove Avenue.

Benefactors Paul Mellon and Frances and Sydney Lewis marvel at the pink Carrara marble and heroic-sized granite on display at the groundbreaking of the Virginia Museum's West Wing in October 1982.

Mellon ceded the choice of architect to the Lewises, who chose the New York firm of Hardy Holzman Pffeifer, which had recently designed the Best Products corporate headquarters on Parham Road. The architect decided the red brick of the original building had run its course and introduced granite in heroic-scaled blocks that were inspired by Henry Hobson Richardson's Allegheny County Courthouse in Pittsburgh, Penn., but also fit with the unusual stone houses across Grove Avenue.

Plans also called for a ceremonial and event space, the marble hall, dividing the Mellon and Lewis wings of the building. When the architect specified a particular pink-hued marble from the famed Italian Carrara quarries, the museum trustees balked at the price. But the Lewises left no stone unturned and flew Dr. William Higgins, the museum president, to the quarry to examine the operation. The Carrara marble was installed.

Paul Perrot served as director during construction of the new wing.

By the time the Lewis Mellon wing opened in 1985, Katherine Lee was the museum director, its first full-time woman director. When she left in 1992 to assume directorship of the Cleveland Museum of Art, Michael Brand had become director [see interview, page 19]. It was under Brand's administration, working closely with Richard Woodward, the museum associate director for architecture and building, that planning for the current expansion got under way. The final Confederate-connected residents also disappeared when the last few descendants of veterans moved to a nearby retirement community.

In 2001 the museum selected London-based Rick Mather Architects to develop a master plan. Since then, Brand left for the Getty Museum in Los Angeles (and recently left there) and Alex Nyerges has brought the mammoth building project to fruition.

“To say that we've had construction challenges is like saying there is water in the Atlantic,” Nyerges said recently. If a royal palace by British architect Christopher Wren inspired the design of the first museum, Londoner Mather has delivered something different and much more open for the site of this former Confederate home. As Tony Blair might say, it will be a piece of Cool Britannia on the Boulevard.

Beauty on the Boulevard