The Richmond Choral Society shares notes with the community. 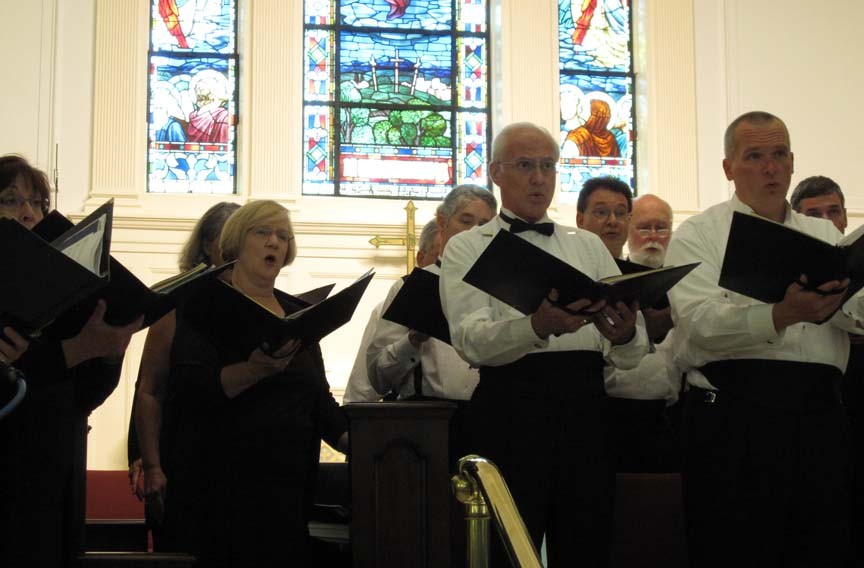 Not so long ago, Markus Compton went out for dinner, and by the time he left the restaurant he was cooking up a plan.

It turned out that his waitress had a day job as a teacher at Swansboro Elementary. Well, said Compton, I have a night job as artistic director of the Richmond Choral Society.

Swansboro had a club for fifth-grade girls called the Women of Swansboro. The choral society had an upcoming program called "Women of Note."

Eventually Compton visited the Richmond city school four times to teach the girls about musical styles and history. He brought along noted soprano Lisa Edwards-Burrs, who sang for them and talked about her career as a musician and educator. And the Women of Swansboro read poems at the Women of Note concert with their family members in the audience, most of which had never attended a choral concert.

The Richmond Choral Society's open-arms approach is on display again this month, in an entirely different way. SummerSings is a series of open concerts, kind of like a pick-up game for singers. For the next two Tuesdays, anyone can join members to sing major works in the choral repertoire: John Rutter's "Requiem" on June 21 and Gabriel Fauré's "Requiem" on June 28.

"It's a way to share choral music with the community," Compton says. And because the show-up-and-sing format doesn't require commitment to weekly rehearsals, he notes, SummerSings gives busy people a chance to be part of a chorus.

Compton will conduct the Rutter piece, and Erin Freeman, associate conductor of the Richmond Symphony, will conduct Fauré. Everyone — singers and listeners — will be seated in the congregation.

Jack Winn, who's performed with the chorus for seven years, says his wife is unsure of whether she wants to participate: "I told her, 'Sit by someone you know, or someone you don't know. Maybe they'll help you, or you'll help them. It's a new experience, a new sound.' Music is for the moment, whenever you do it."

The Richmond Choral Society has had a long series of music moments — starting back in 1946. It recently performed a 65th anniversary concert for which several former conductors returned to the podium to conduct some of their favorites. Photos, programs and memorabilia from the past six decades were on display, and representatives from the Virginia Historical Society accepted the chorus' archives into the museum's collection.

The chorus selects members by open audition. It performs three concerts a year, sings a range of old and new classical music and pops tunes, and often joins with the Richmond Pops Band for Christmas concerts.

Compton plans to form auxiliary ensembles soon that can serve as choral ambassadors to smaller venues. And, certainly, he and the chorus will be on the lookout for more serendipitous moments in area restaurants. S

SummerSings takes place at St. Mark's Episcopal Church, 520 N. Boulevard, on June 21 and 28, at 7:30 p.m. each night. (Doors open at 6:45 p.m.) Admission is $10; scores may be rented for $2. No reservations necessary. For information on the event call 353-9582. To learn about the Richmond Choral Society go to richmondchoralsociety.org.