A local nonprofit promotes music for people of all ages. 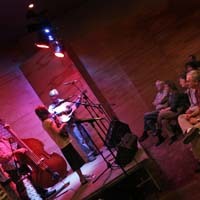 The world's most advanced diatonic harmonica player hustles from the Richmond airport to a gig at Mary Munford Elementary School on a warm September afternoon. Grammy-winner Howard Levy arrives just in time to the show. For the kindergartners at Munford, it's their first auditorium event and the teachers advise them to make “pretzel legs” to avoid slipping into the maws of the seats that keep folding up unexpectedly.

The show is sponsored by JAMinc, a group that founder Wally Thulin calls a “dedicated, creative and talented board of music lovers who volunteer their time and energy” to their stated mission — namely, to “open minds, hearts and ears to music deserving a wider audience through education, performance and support.”

The group started, says its board chairman, Tim Timberlake, because “We just, selfishly, wanted to bring more of the music that we liked into town.” (Timberlake is married to Style Weekly's Food and Drink editor, Deveron Timberlake.)

When the future show promoters realized they didn't want the headache of owning a venue, the nonprofit was born and grew more from creative inspiration than any existing models. Board member Robbin Thompson, co-founder of In Your Ear Studios, suggested bringing shows to his studio to hold the events house-concert style, where attendees come early with food and drink to share.

“The whole idea started to evolve,” Timberlake says. “We all realized once we formally started JAMinc that it would be an obvious thing to do, to add the school piece to all our shows.”

Levy's appearance is in line with the stopovers of other world-class musicians — Bryan Bowers, Doyle Lawson, the Kruger Brothers, the Country Gentleman and the late Piedmont bluesman, John Cephas (making a final solo appearance), among others — that JAMinc has brought to town, and often into schools, in recent years.

Levy starts his show by making strange clucking sounds on his harmonica, and launches into “Mary Had a Little Lamb.” The kindergarten crowd goes wild. He tells the kids, “If you got a harmonica today, 90 percent of you could play ‘Twinkle Twinkle Little Star' by tonight.” He whips through Mozart, Bach, rock 'n' roll, blues and jazz. Between songs he offers a history and explanation of the instrument. But no amount of explaining makes sense of what Howard can do with that instrument. The children clap and spontaneously play imaginary harmonicas. Clearly, the performer has galvanized his audience.

“I want the children to have exposure to the traditional Americana music like blues, folk, jazz, that are a part of American history,” Munford's principal, Greg Muzik, says of working with JAMinc. “This is music they might not otherwise hear.”

The next night, at In Your Ear Studio, Levy plays for the grown-ups. But first there's food. Professors and Virginia Commonwealth University students mingle with music lovers and musicians in an informal setting, plates laden with sandwiches, lasagna and pieces of homemade pumpkin pie. In the state-of-the-art studio, Levy performs with sideman Chris Siebold to an audience not 10 feet away. His astonishing gift combines with the rarefied atmosphere and perfect sound system to produce something akin to deep-tissue brain massage. “In Your Ear is a wonderful place to listen carefully to music,” Timberlake says.

Two weeks later, JAMinc finds itself working with the Richmond Folk Festival, supplying transportation, equipment and the planning to bring six groups of festival performers to 15 Richmond schools in two days, exposing some 5,000 children to something new. A very JAMinc moment occurs when the Tuvan throat singers spontaneously join with North Bear, an Indian drum group, and musicians from different parts of the globe find a moment of unity in the patterns of their music. At the festival itself, three local folk bands sponsored by JAMinc play the family area.

One short week later JAMinc is at the Virginia Historical Society, presenting an evening with Wayne Henderson and Helen White and the Dixie Bee-Liners. Wayne Henderson, possibly the world's best guitar maker (and not a bad picker at all) eats a plate of barbecue before the show and talks about JAMinc. Last year he and White played two nights at In Your Ear, which recorded the sessions at no cost to the artists, resulting in their first live album. After mentioning what “good folks” the JAMinc people are, Henderson sums up his experience with one of his typical understatements: “For me it was real nice to play a guitar I made someplace where it sounded real good.” At the performance that night, Henderson and White play to a standing ovation, the instruments gleaming like rare jewels. After the show, people mingle with the musicians and some even get to handle one of Henderson's one-of-a-kind guitars.

“We want to spread the joy of music and afford as many people as possible a really good and possibly illuminating musical experience,” Timberlake says.

Mission accomplished so far. And long may they jam.