An eclectic singer and songwriter commands the room. 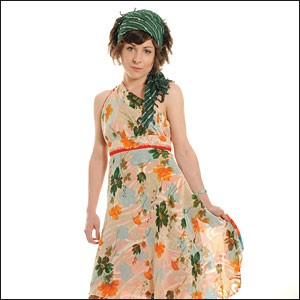 Pretty, poised and petite, perched on a tall stool in the low-ceilinged Ipanema Cafe, Lydia Ooghe sings about the unrequited love of a priest for a singularly lowlife parishioner — a New York sewer rat. Her inspiration is a minor subplot in novelist Thomas Pynchon's “V.”  Ooghe's version, extracted from the sprawling, satiric postmodern epic, is poetic and deeply sympathetic.

The rest of the set is of a piece. The whimsy in the lyrics is dark enough to avoid being precious. The melodies are asymmetric, the harmonies complex enough to unfold within the songs in surprising ways. There is virtuosity to spare in her band, Lux Vacancy, which features Trey Pollard on pedal steel guitar and Jacob Thro on bass.  Pianist Wells Hanley is absent tonight; perhaps just as well: There is little space for keyboards. Ooghe has an actress's command of the room — inhabiting each song, she draws the audience in rather than blowing them away.

This illusion of unstudied grace is the product of experience. The Charlottesville-raised Ooghe spent several formative years on the stage in the two biggest Broadway musical roles for a child actress in the early 1990s, playing Young Cosette/ Young Eponine in “Les MisAcrables” and the lead role of Mary Lennox in “The Secret Garden.” “They got me when I was really young,” she admits over a salad at Mom's Siam.  “In any kind of physical performance the more sense you have of your own physicality the better.”

The Broadway experience was serendipitous. The touring production had no child actors, so the parts were cast at every stop. “The Washington cast had open-call additions for the little girl part and I got cast,” Ooghe says. “When they moved on they referred me to an agent in New York in the event that I wanted to keep acting.” The part had a high turnover; girls grew too tall and were constantly replaced. As “Les Mis” was ending its long Broadway run she auditioned for “The Secret Garden,” replacing the Tony-winning (but now too tall) originator of the role. Ooghe completed the Broadway run and switched to the touring company until the show closed. “I was all finished with that by my 14th birthday,” she says.

Returning to Charlottesville, she finished high school and was majoring in theater at the University of Virginia when she found that she preferred the direct audience interaction that came from playing with rock bands. She spent several years after graduation playing in East Village clubs as half of the alternative pop duo, “The Analogues.” After five years, in the spring 2008 Ooghe realized that personal space was as important to her craft as 24/7 megalopolis stimulation. Smaller, musically vital, close to her Charlottesville hometown — and with a support infrastructure of former college bandmates Todd Herrington, Joel Denunzio and just-departed for San Francisco Steven Norfleet — Richmond was the obvious choice.

She doesn't do covers, so it took a while to create a new repertoire — virtually every song she sings is an original. Her writing is eclectic. In one song, she describes her parent's romance as the meeting of cool ice cream and a hot waffle cone, in another she channels the defiant last thoughts of an elephant waiting to be electrocuted by Thomas Edison. In her signature song, “Girlfriend,” she gently brushes off a bar pickup (“I'm not here to be your girlfriend/I'm here to drink piAña coladas”).

Around her new life Ooghe's built a near perfect cycle of songs, captured and just released on her EP “Love that Glow.” When Lux Vacancy recently filmed a music video for “Girlfriend” at Emilio's, she sent an open casting call, inviting anyone who wanted to take part. The song may chronicle a celebration of insular self-possession, but there is room inside for everyone.

“I think writing a song is like building something with papier-mA›chAc when you're a kid,” she says. “You blow a balloon and then cover it with stuff. And then you pop the balloon. The feeling that inspired the song is like that balloon. It doesn't matter as much as what you build around it.”  S

Lydia Ooghe will open the Invention of the Telescope concert at the Camel, 1621 W. Broad St., on Dec. 3 at 9 p.m.  Also on the bill: the Photosynthesizers, Chris Merritt and Caulit Anything.  Admission is $5. For information, go to http://www.camel.org.