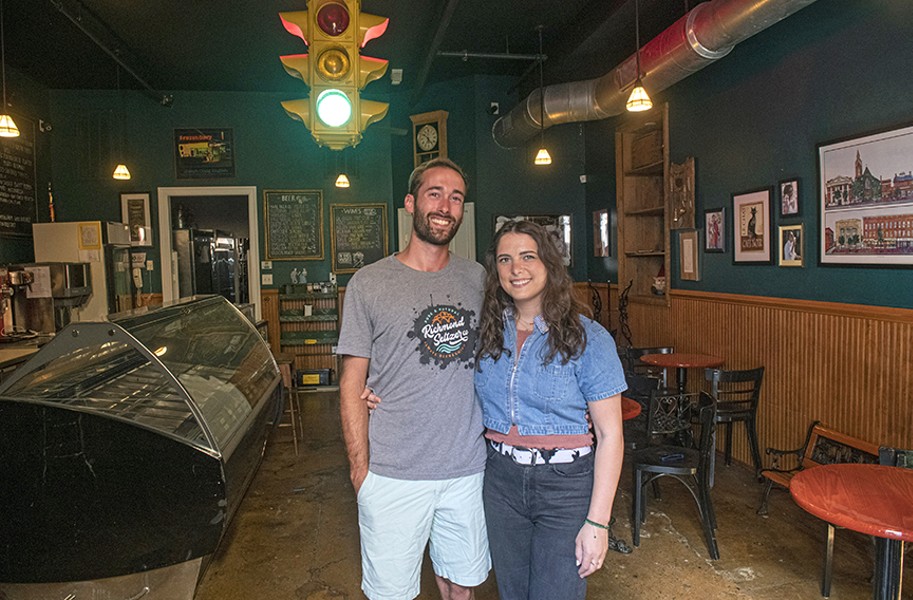 Gordon, with a background in engineering, handled the scientific details – “You really have to watch PH and oxidation levels” – while Gleiser used her marketing acumen and craft beverage industry experience to start building a brand on social media. They already have over 1,400 followers on Instagram, plus merch including koozies, stickers, T-shirts and beanies.

“We were looking for a space with a thousand square feet we could use for brewing,” Gordon says. Stoplight Gelato’s 4,3000-square-foot building fit the bill, and, most importantly, Gordon and Gleiser’s mission for their company aligned perfectly with Stoplight owner Mike Wilbert’s.

“The brand we are going for is more inclusive than the current brewing industry,” Gordon says. “Vanessa being an owner adds that representation that is often missing, we’re both Jewish, and we want to support the Black Lives Matter movement and everyone in the LGBTQIA+ space.”

Wilbert, too, is deeply invested in maintaining a community-driven, open-to-everyone cafe in historic Jackson Ward. And that’s all thanks to Stoplight’s original owner, Barbara Given.

“My first call was to Barb,” Wilbert says.

Wilbert and partner Caitlin Kilcoin took over the sweet shop at the end of 2018 when Given, grappling with health issues while working hours-long shifts, decided to pass the torch.

During that call, Given gave Wilbert the green light to partner with Gordon and Gleiser.

“Before even talking to Iain and Vanessa, I said ‘Hey Barb, we are thinking about enhancing the concept by bringing in a partner to navigate the new times,’” Wilbert says. “And she fully supported it.”

Barbara Given and her late son, Bryce, purchased the 100-plus-year-old building at 405 Brook Road in Jackson Ward in 2010. Before they could hold their gelato shop’s grand opening in 2016, though, Bryce passed away from cancer, leaving a determined Given – with the full support of the neighborhood behind her – left alone to carry on her son’s legacy.

Wilbert and Kilcoin officially reopened the shop in spring 2019 and nearly everything remained just as Given had left it, with slight additions of beer, wine and pizza to the menu. “We committed to Barb that we would continue to operate a warm, inviting, casual neighborhood cafe where all are welcome,” Wilbert says.

When the pandemic hit, Stoplight Gelato temporarily closed its doors, “for health and safety reasons.”

It took advantage of this pause, Wilbert says, working with the Jackson Ward Peace Team and using Stoplight as a donation collection center for the area. “We collected donations twice a week and the peace team distributed the items to the neighborhood at the height of the pandemic,” Wilbert says.

After being shuttered for nearly a year and a half, Wilbert is ready to reopen Stoplight this fall, serving up the gelato the neighborhood knows and loves, plus pouring Gleiser and Gordon’s hand-crafted seltzer from the bar.

Richmond Seltzer Co. will start with six seltzers on tap, with one flavor that rotates seasonally.

“I need to narrow it down,” laughs Gleiser, who says it knows at least two flavors to start will be family and friends’ favorite Blackberry Sour and Pineapple. Gordon notes that the flavors, which are now being captured in glass bottles, will present differently once they start using higher-end equipment.

“Basically we will be doing small-scale canning with a focus on draft sales in the taproom to start,” Gordon says. Kegs will be ready for restaurants to order, Gleiser adds, noting that in advance of the restaurant’s reopening, Richmond Seltzer Co. will be busy attending special events across the state. “People have been reaching out asking for our product. It’s good to see everyone excited about it,” Gleiser says.

As for the “Why seltzer?” question – it feels a little rhetorical at this point. Have you been to the grocery store, liquor store or corner store lately? Seltzers are everywhere. And for good reason. They typically have fewer calories than other libation choices, and, depending on the brand you’ve chosen, they’re pretty damn drinkable.

Plus, Gordon says, the chemistry is simpler than, say, brewing beer. “Unlike beer where you have grain and barley and oats that might have to sit for a few weeks to ferment, we can make our seltzer in two weeks, maybe about a week with our new equipment.”

While many breweries, distilleries and cideries in Virginia – and across the country – are experimenting with their own version of a hard seltz, Gleiser says she believes that by homing in on only seltzer, it will be able to refine the process, and product, to perfection.

And what does Stoplight’s original owner and unofficial shop tastemaker have to say about hopping aboard the hard-seltzer train?

When asked, “Do you think Barbara’s ever had hard seltzer?,” Wilbert laughs. “Well, we’ll go over and visit with her and she’ll have a 4-ounce pour of wine, but we look forward to getting her first seltzer at the space when we open.”