One of Maymont's Beloved River Otters Has Died 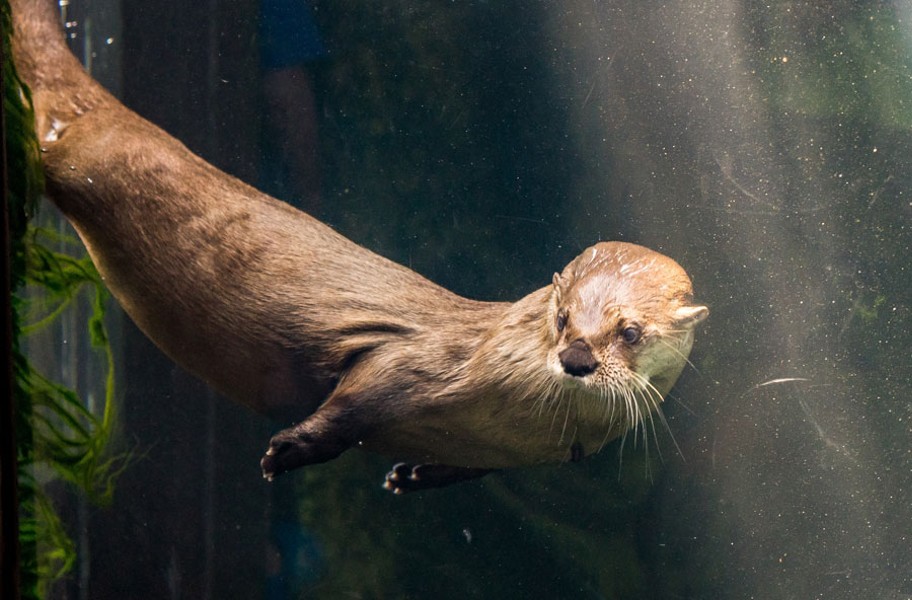 Chris Johnson Pandora, swimming in the otter exhibit at Maymont. She was known for racing visitors across the exhibit and performing backflips.

Sad news out of Maymont. Pandora, one of the park's North American River Otters, has died at the age of 17.

According to the staff, she died of natural causes from complications of old age. The full statement from Maymont is below.

Maymont Mourns the Loss of Its First Otter

The Maymont family is deeply saddened by the recent loss of Pandora, our female North American river otter, who passed away over the weekend at the age of 17.

Pandora arrived at Maymont as an orphaned 6-week-old pup on May 24, 1999. She had been monitored along the banks of the Chickahominy River by the Virginia Department of Game & Inland Fisheries (VDGIF), and it became clear that she was malnourished and that her mother would not return for her. After a short time with a wildlife rehabilitator, she was eagerly welcomed at Maymont. The new Robins Nature & Visitor Center, featuring a large aquarium for river otters, was scheduled to open soon. Pandora was the first otter ever to join Maymont's native wildlife community.

Pandora was adored by everyone from her earliest days at the estate, and she delighted countless guests for many years with her aquatic acrobatics and sweet furry face. According to Maymont aquarist, Kristin Coury, she had a special connection with guests, racing them across her exhibit and showing off her signature backflip for anyone who would watch.

"We thought of Pandora as a 'sweet and saucy' personality," said Coury. "Some of her favorite things were eating hardboiled eggs, playing with disc sleds and brushes, and snuggling with Neptune in their hammock. Her spunky, curious nature is already sorely missed."

North American river otters typically live eight to nine years in the wild but can live significantly longer in captivity. Recently, Pandora was showing signs of her advanced age including a loss of appetite and sluggishness, and she died naturally of kidney failure in the care of veterinarian Dr. Kelly Gottschalk.

"The evidence of Maymont's care and attention is found in the remarkably long number of years that their animals enjoy," said Dr. Gottschalk. The staff truly helps them thrive. I hope everyone will be able to celebrate Pandora's long and happy life, even as they experience the sadness of losing her."

Maymont currently has one male river otter, Neptune, who came from Florida and lived with Pandora since the Nature Center opened in November 1999. Neptune is an active 19-year-old who can be seen daily swimming in his exhibit. He is coping well with the loss of Pandora, and he is receiving special enrichments from the animal keepers to keep him stimulated. Animal keepers and Dr. Gottschalk monitor his status closely and regularly due to his advanced age.

Otters are semi-aquatic members of the family Mustelidae, cousins to weasels, badgers, ferrets and mink. They live on every continent except Antarctica and Australia. There are 13 species of otters; the ones native to this area, including Pandora and Neptune, are river otters (Lontra canadensis). In Virginia, their habitat includes the shores of the Chesapeake Bay and the rivers, lakes, and marshes along the Bay watershed. They are identified by their elongated body, short legs and long tail. They can swim at speeds up to six miles an hour, dive to depths of 60 feet, and stay submerged for more than four minutes.