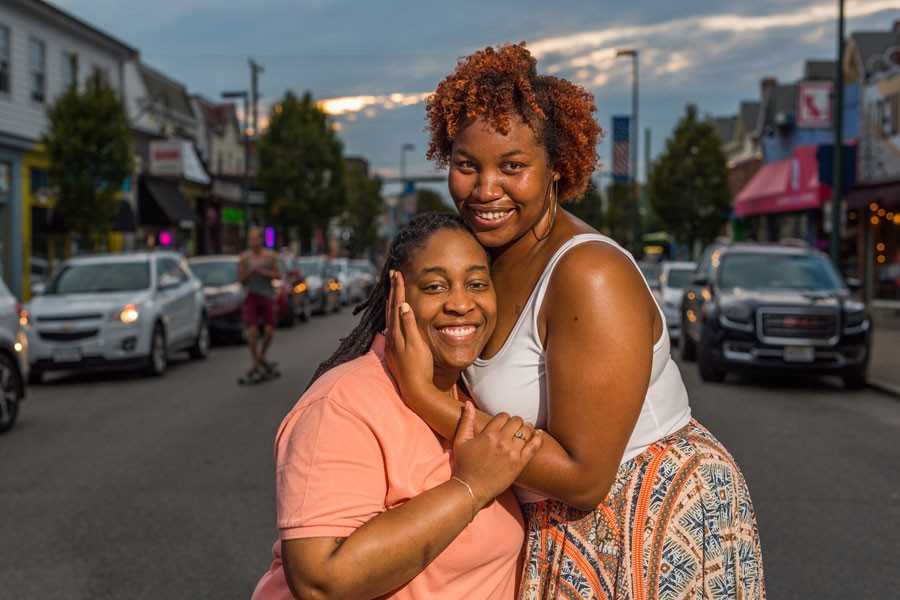 Monet and Nandi Alexander-Hinton of Richmond pose in Carytown. They describe their family as “insane” with strong personalities who can bump heads, but at the end of the day, they love each other unconditionally.

A wedding can lead to many things, but a museum exhibit usually isn’t one of them.

In 2014 when Richmond Region Tourism’s OutRVA campaign was giving away a same-sex wedding and everything that entails, Michael Simon was asked to photograph the event. Recently returned to Richmond after years in New York where he’d shot many such celebrations, he signed on, eager to meet people and make connections.

Coinciding with Virginia’s legalization of same-sex marriage, the event was a success.

During an interview about the wedding project with Diversity Now that included the Valentine’s marketing director Domenick Casuccio, the subject of attracting gay tourism came up. Casuccio knew the museum was looking for a companion show to “It’s All Relative: Richmond Families 1616-2016” and suggested portraits of local LGBT families.

The Valentine heard from 50 couples and selected 20 based on geographic location, age, race and family composition in order for the show to represent myriad people.

“It was important to us that we allow the families to define themselves,” Simon says. “These were people who created new family structures to become a family.”

Curator Meg Hughes was just coming off maternity leave and recalls the short timetable to shoot and assemble the exhibit. “It was six months from conception to opening,” she says. Hughes is amazed that they were able to create something from nothing rather than curating from the Valentine’s vast archives. “None of this imagery existed before then,” she says. 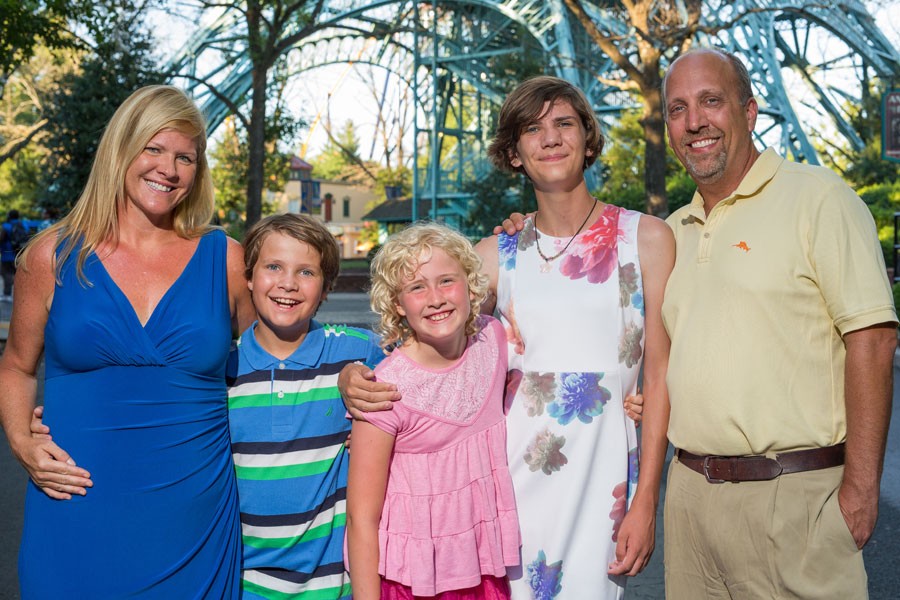 One of the stereotypes Hughes and Simon wanted to dismiss was the expectation that the families chosen would be urbane city-dwellers. They had no problem finding plenty of suburbanites. Prior media attention wasn’t in short supply either: Several of the families chosen had already been the subject of national coverage.

Photographed over a two and a half months around the Richmond region — Pocahontas State Park, the Virginia Museum of Fine Arts, Capital Square and the Greater Richmond ARCpark — the 20 portraits offer a wide-ranging look at the many faces of LGBT families. No surprise, they’re just as diverse as straight families.

One of the few interior portraits shows Richmond Triangle Players’ executive director Philip Crosby and his husband, David Allan Ballas, posed on the set of a production. “Family is both the one you are born into and the one you choose,” Crosby is quoted next to the photograph.

For the Valentine, the exhibit is a bonanza of historical documents that will be added to their permanent collection to better represent the Richmond LGBT community. “Usually we collect, Hughes says, “but sometimes we create material.”

Surely the exuberantly colorful photograph of a group of drag queens is a first for the museum. On the sign next to it, Ryan Allen, aka Reann Ballslee, says, “As a drag queen, family means those who look out for you.” Sometimes that means lipstick or a safety pin.

Simon’s photographs reflect both his skill in capturing a family, as well as his subjects’ enthusiasm. “All of the subjects were super down with the project,” he says. “It was pretty magical how it all fell into place.”

It didn’t take him long to figure out that when kids were involved, he had to knock the shoot out pretty quickly before they got bored, dirty or mischievous. The Hall family’s portrait was shot at King’s Dominion, and the kids were more interested in running around the amusement park than posing under the Eiffel Tower. Simon managed to get the shot anyway.

“When we told our younger children that their brother truly felt she was a sister, we worried they would resist the change, but they barely skipped a beat,” Kate Hall says, reflecting on the openness with which children view others. “We couldn’t have been more proud of the way that they wrapped their minds and arms around their big sister.” The compelling faces and stories of “One Love” offer Richmonders the opportunity to do the same with the LGBT community. S