Once one statue comes down, who owns the land? 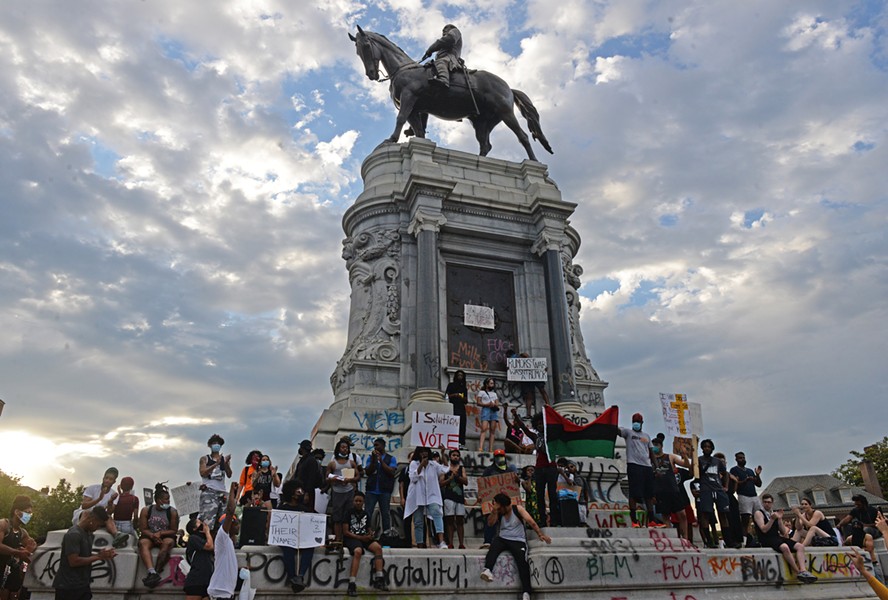 The Allen family donated the land for the Robert E. Lee statue in the 19th century.

The governor’s decision to remove the Robert E. Lee statue from its plot in the middle of Monument Avenue may mean the land reverts to the heirs of the people who donated it to the state.

Real estate investor Otway S. Allen and his sisters, Bettie F. Allen Gregory and Martha Allen Wilson, donated the circle of land with a radius of 100 feet to the state for the statue, according to the March 17, 1890, deed in Henrico County, transcribed on the Library of Virginia website. Allen Avenue, the cross street to Monument at the circle, is named for the family.

The officers of the Lee Monument Association also signed the deed, donating the statue itself, which it had funded. P.W. McKinney, the then-governor, signed in acceptance on the part of the state. He also signed in donation as president of the association.

The document, found on pages 367-370 in Deed Book 129B, transcribed on the Virginia Memory website, includes the language that the state, referred to by the female pronoun: “executes this instrument in token of her acceptance of the gift and her guarantee that she will hold said Statue and pedestal and Circle of ground perpetually sacred to the Monumental purpose to which they have been devoted and that she will faithfully guard it and affectionately protect it.”

It's unclear whom the heirs of the three siblings are, whether they would want the land back and how such a process might work. Also unclear is whether putting something else or another statue on the circle would satisfy the deed.

Although it sounds like an endless lawsuit from a Charles Dickens novel, such a recision has happened before in Richmond, although like the Lee statue, at the time of the donation the land was in Henrico County.

In 1751, James Cocke donated land to Henrico County for a courthouse at what became 22nd and East Main streets in downtown Richmond, according to “Virginia’s Historic Courthouses,” a 1995 book by John O. and Margaret T. Peters. The last courthouse there was built in 1896, long after the land was donated, but the county’s courts and offices were there through the 1960s. Henrico County, however, moved its courts, county offices and jail to the West End in the mid-1970s, eventually leaving the courthouse, now in the city, empty.

Heirs of Cocke sued the county in 1988, saying if the land and the attached courthouse were no longer used for that purpose, they wanted them back. The lawsuit, James Cocke Memorial Society v. County of Henrico, was resolved in 1992 when the old courthouse was auctioned on its own steps, according to the Peters’ book.