On West Broad, No Claws Yet in Chicken Face-off 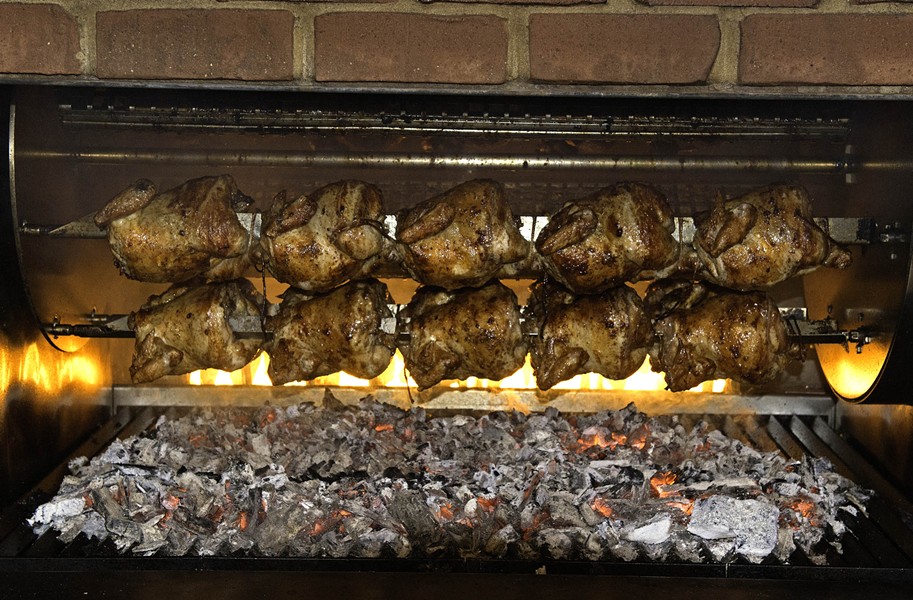 "I come maybe every three or four days," says Margaret Bell, walking into the restaurant on a recent weekday for lunch. "I eat the chicken because it's famous and because it's good."

Chicken Fiesta, with two locations in Midlothian and Henrico, perhaps is less well known in the city limits, but has its own fanatics devoted to its charcoal-roasted birds.

"It's wonderful, it's heavenly, it's just different — it's not fast-food tasting," says Melinda Batalias, a Monacan High School math teacher on her lunch break.

Soon, these two local chicken stalwarts will duke it out. Chicken Fiesta will make its first foray into the city this fall, opening in the heart of Lee's territory.

The local chain plans to set up on Broad in the building now occupied by Cameron's Seafood, Chicken Fiesta general manager Shana Greenbaum says. It's a stone's throw from Lee's, which is between the DMV and Pleasant's Hardware.

Chicken Fiesta's owners prefer to remain anonymous, Greenbaum says. But the businesses are owned by a Colombian family that operated chicken restaurants in their home country before moving to the Richmond area about 20 years ago, she says. The first Chicken Fiesta opened in 2006. Its two locations are unassuming and easy to miss, at least until you find out how good the chicken inside tastes.

"The secret to our chicken is in our marinade," Greenbaum says. "We use fresh spices delivered to us from Florida and let our chickens soak it up before cooking them over our charcoal."

Despite the shared focus on poultry, the owners of both restaurants say they doubt they'll be carving into each others' business.

"Our style of food is totally different to Lee's Chicken," Greenbaum says. "We never try to compete with anyone."

The owner of Lee's, Henry Loving, agrees. After all, he says, you don't satisfy a fried-chicken craving with a rotisserie-cooked bird. So, the city isn't getting a chicken war, he says. It's getting a chicken district.

"It's kind of neat to have another chicken place, but I don't know if it will impact us very much," he says. "It wouldn't be an apples-to-apples comparison at all, but it is chicken."