This project lets you experience art through your windshield. 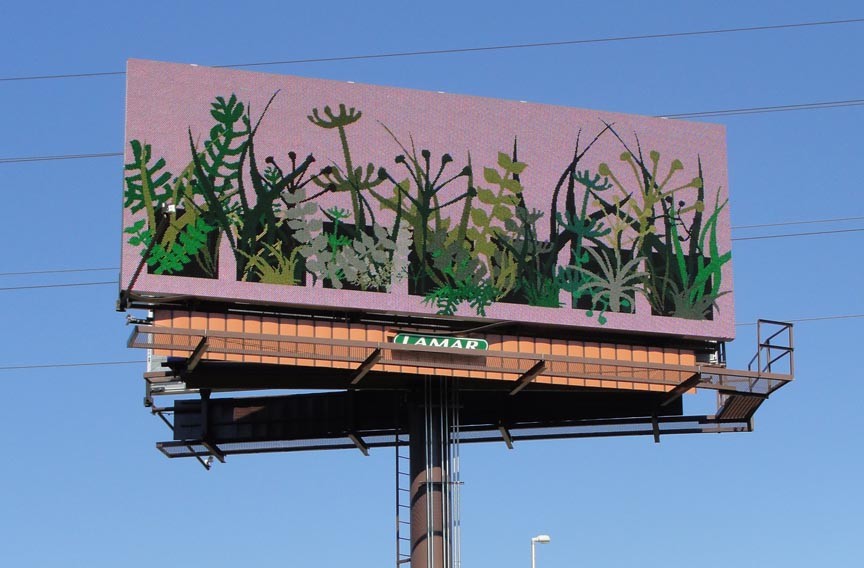 It's the impact of the unexpected that defines Richmond's Billboard Art Project. Its director, David Morrison, was inspired to start it in 2005 when he saw a new digital billboard displaying a screen test of sorts. The images were stock photos like those available as a computer's wallpaper.

What intrigued him was how differently they resonated on a billboard. "It wasn't advertising, so it had a very different feel," he says. "I decided I wanted to rent a billboard for a day and replicate that feeling."

He saw the appeal of imagery rather than advertising on a billboard as a gift to motorists, and was inspired to schedule 24 hours of unrepeating 10-second images. Then he did the math: "It would have taken over 8,000 images, so that never happened," he says, laughing.

Instead he conceived of three eight-hour cycles to give passersby a break from advertising. Lamar Advertising confirmed that it had the capacity and Morrison began discussing his idea with others.

"I saw it as a social experience for people for that one day," he says. "I discussed it with a friend who's a sociology professor and he wanted to submit images. He told others and it just grew organically. There was no official call for entries. By the end, we had 36 people from all over, even the West Coast, Thailand. Artists embraced it as a new medium."

After the first Richmond show, Morrison and artist Claire Accardo re-created the project in eight other cities, including Chicago, Nashville, Tenn., and Savannah, Ga. They've since featured more than 500 artists from all over the world and displayed more than 10,000 images.

In each city, site-specific and medium-specific works were created, including one artist whose imagery consisted of miles-to signs showing the distance from the billboard to some of the Middle Eastern cities in today's news.

Accardo and Morrison upped the ante this year by adding sound and holding a weekend residency to bring together visual and sound artists — some new, and some who'd been involved in past billboard projects.

"Everyone knew so much," says artist Monica Carrier, who participated. "It was an intense work weekend and everyone worked their butts off on really new ideas. The entire group was warm and open because of the collaborative element to the project."

"Everyone joked that they had an art hangover after that weekend," Accardo says.

They also invited 25 schools to participate, so art from children from kindergarten to high school also will be part of the roadside art gallery.

The billboard is on Interstate 195 near Westwood Avenue. The group has rented it from April 2 at midnight through April 29 at 11:59 p.m. Viewers who want a longer look can park under the billboard by following the trail just west on Westwood Trail to where it intersects with Westwood Avenue.

The schedule will be divided into four weeks and will feature new artists whose work will be shown in rotation Mondays through Fridays. On Saturdays and Sundays, the schedule will be different and include sight and sound collaborations, featuring an audio component to which viewers can tune in on local radio station 105.1-FM.

"There's some profound art in this show," Morrison says. "It's a privilege to put it up there." S

The Billboard Art Project runs April 2-29 on the side of Interstate 195 at Westwood Avenue. For information, go to billboardartproject.org.