On the Road to Keysville

The second installment in our local travel series ventures 70 miles south to Charlotte County and Keysville, a slow town with helpful residents and high hopes for the future. 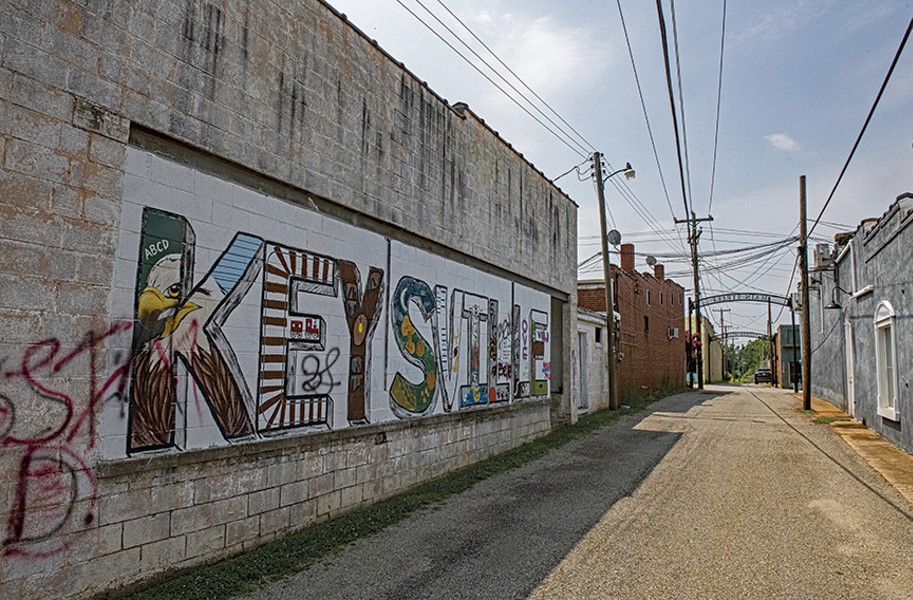 Scott Elmquist A celebratory mural adorns the side of a building on Main Street in Keysville.

On a recent Saturday, steam rises from the all-you-can-eat breakfast bar at Sheldon’s. The restaurant fronts the U.S. Route 360, some 70 miles south of Richmond near Keysville in Charlotte County. For some Virginians, this frontispiece of a 51-room motel is an institution. Seated near the buffet is a regular, Kathleen Boulding Stewart, 81, who dines with a companion and chats up acquaintances as they pass en route to the spread of sausage patties, corned beef hash, crisp bacon, fried apples, pancakes, scrambled eggs, grits, and yes, biscuits: This is Southside Virginia.

“I’ve been coming here since I was born,” Stewart says. Her claim is literally true since both she and Sheldon’s restaurant arrived in 1940.

While settling up at the cash register, the jovial Stewart engages Style Weekly photographer Scott Elmquist and myself in banter. He and I have motored to Keysville this morning to explore an off-the-beaten-path town for a travel series on day trips that might reduce pandemic-induced ennui.

Sizing up my reaction when I nod positively, she doesn’t buy it.

“Do you know where that is?” I confess ignorance.

Fort Mitchell is 9 miles south of Keysville on Route 15. It is one of dozens of towns at country crossroads that dot the former tobacco belt that spreads south of the Appomattox River to the North Carolina line.  Keysville, population 773, like nearby Blackstone, Burkeville, Chase City, Crewe, Emporia, Kenbridge, Lawrenceville, McKenney, South Hill and Victoria aren’t river towns, but burgs that owe their existence to railroads. 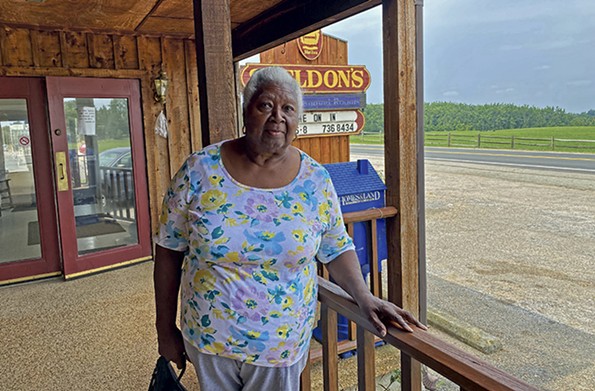 After the Civil War, and then the Great Depression, major tobacco production never reached previous heights in Southside Virginia.

“I used to get up at 4:30 in the morning to work on a tobacco farm,” Stewart says. “Everybody used to have a farm. Now you can’t even find a farm.”

Upon finishing high school, “I couldn’t wait to get out of here,” she says. Moving to New York she lived in the Bronx for decades before returning to her roots. “I like being back but miss my [deceased] brother. We fished together. I love to fish.”

When Elmquist and I make our run at the breakfast bar at 10:45 a.m. the stainless steel scrambled eggs vat is empty. When I mention this to our affable waitress she explains that while the restaurant is shifting to lunch mode, “I’ll have the kitchen make a fresh batch.”

Elmquist and I drive directly from Charlotte County’s lush cornfields and dense forests that line the highway into downtown Keysville, modest as it is. We passed no barrage of suburban gas stations, body shops, fast food, small businesses or aggressive signs. Instead, we come to a stop sign at the awkwardly defined intersection of Railroad Avenue, Church Street, and the tracks of the former Richmond and Danville railroad line.

In April 1865, as Richmond smoldered in ruins, Jefferson Davis, his family, and the Confederate cabinet took this escape route to Danville in the last days of the Civil War. Today, a handful of detached and decaying boxcars occupy the tracks. As we cross the rusting rails and follow Railroad Avenue, we spot another 19th-century relic, a long-abandoned train depot. Built in stages from 1890 to 1900, the one-story structure, with traces of racially segregated waiting rooms, awaits much-needed restoration. Memo to termites: Don’t stop holding hands.

This picturesque Keysville landmark was documented by Hollywood as a setting for the 1976 television series, “Eleanor and Franklin.” It stood in for train stations in Eastport, Maine, and Warm Springs, Georgia. Ed Herrmann played the 32nd president and Jane Alexander, his indomitable first lady. Child actors Ted Eccles and Mackenzie Phillips played the Roosevelts’ younger selves. The production won 11 Emmy Awards. 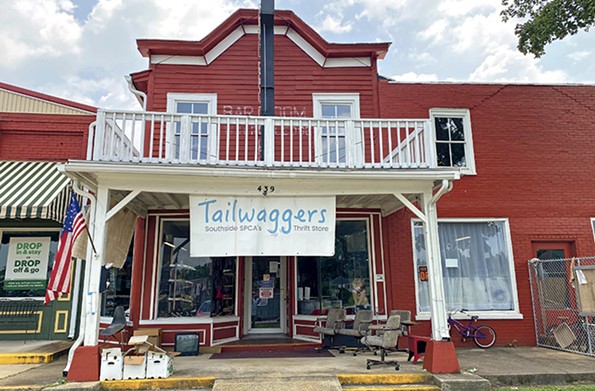 An antique structure directly across the street from the station is in better shape. It houses Tailwaggers, a thrift store that, as the name suggests, benefits the Southside SPCA. Suddenly, “Arrgh!” screams a middle-aged shopper in short-shorts as she rummages through a cardboard box of fresh green peppers displayed on the concrete front porch. Customers within earshot turn toward her: “Oh, it’s just a lizard,” she apologizes. “I thought it was a snake coming out of there.”

Things are quieter inside the well-organized, two-level store, which has little furniture but ample clothing and a section devoted to Christmas decor. 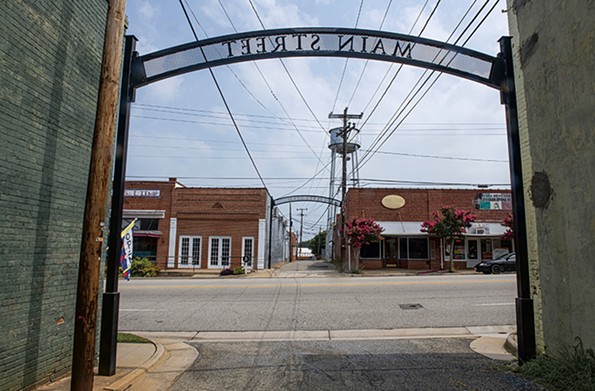 The main downtown shopping street of Keysville begins just around the corner from the thrift store on Route 15, or King Street, historically known as the King’s Road. An attractive antique store, full of accessories, bric-a-brac and books, is Bretcetera. The proprietor is affable Owen “Bret” Peaden, who says he retired to Keysville after careers in social services administration and later library work at Hampden-Sydney College. He is quick to mention his local connections to Keysville through cousins.

“Are you familiar with Gertrude Shook?” Peaden asks. “She was an artist and craftsperson.” He produces a catalog of a group exhibition held in Richmond in the mid-1970s that included works by the late local artist and teacher, who lived from 1913 to 1997. The shop displays a number of her fanciful works, including a basket woven in myriad materials in jazzy color combinations. “Her studio was next to her home by the Cruis-In Cafe,” Peaden says, referring to a locally popular diner on the edge of town. 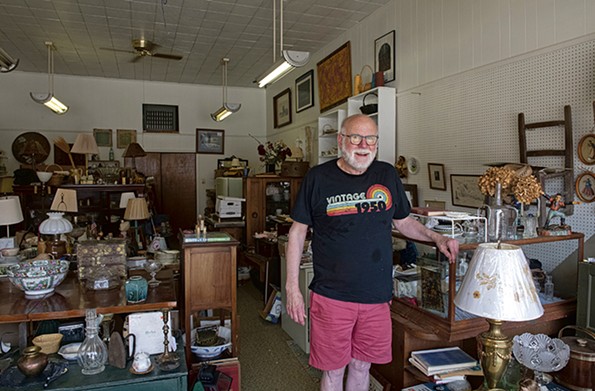 Later in the afternoon I wander over to investigate. The cafe is closed late Saturday afternoons. I find the extremely low-lying, circa 1945 Shook house and studio is constructed of concrete blocks and nestled in a grove of trees. They appear to have been an architectural collaboration between the Druids and Frank Lloyd Wright with low gable roofs, wide and extended eaves, clerestory windows, and a covered carport. “This complex... is far from the Southside norm, writes drolly “Buildings of Virginia,” a 2015 tome of the Society of Architectural Historians published by the University of Virginia Press.

Charlotte County was established in 1764 when it was carved out of Lunenburg County. It was named for Queen Charlotte, the wife of George III, whom the colonists would rebel against a dozen years after their marriage, which would produce 15 children, 13 who lived to adulthood. The German-born queen would also found Kew Gardens, still a world-famous botanical must-see in London. Charlotte County’s southern border is defined by the Staunton River that flows into North Carolina’s Albemarle Sound. The courthouse is located just 10 miles from Keysville and boasts a Thomas Jefferson-designed courts building. 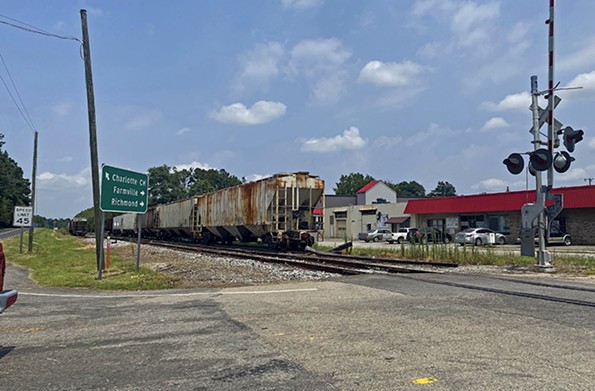 Keysville was established in 1808 as a stagecoach stop and later named for John Keys, a tavern owner. In 1852, Richmond and Danville Railroad tracks were run through the settlement. It received town status in 1887 and evolved as a railroad junction, regional trading center and resort. In 1898 what became the Bluestone-Harmony Academy and Industrial School was opened for Black students. For 50 years it had the largest enrollment of any Black boarding school in the East, with many of its graduates going to college. 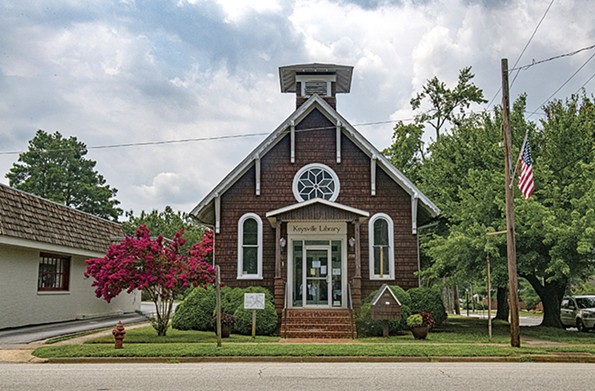 The public Keysville Library now occupies the former Keysville Presbyterian Church, a shingle-covered frame sanctuary whose tower and rose window are intact. Town offices are in the former Sunday school wing. Directly across the street is a little free library, a colorful, but solid confection of carpentry whose hinged door opens to reveal children’s books.  A car pulls over and out pops Dakota Atkins, a highly focused 10-year-old fifth-grader from Victoria. He methodically examines the day’s offerings. His mother waits patiently at the wheel, the motor running: “He found a ‘Harry Potter’ book here about two years ago and now expects to gradually find the complete series.” 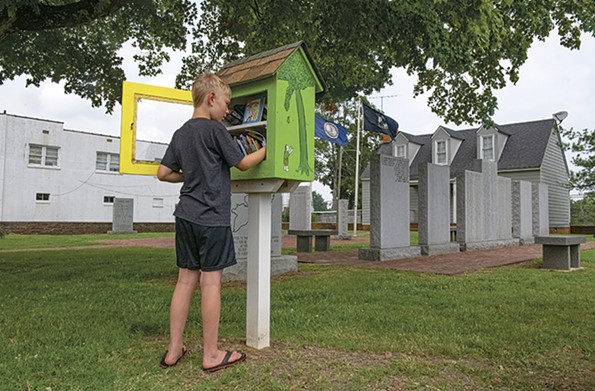 Another feature of American flag-lined King Street is the Keysville war memorial. A city building lot has been converted to a hardscape plaza from which rise impressive granite megaliths honoring locals who served in the military, some who lost their lives in World War II, the Korean conflict and Vietnam. No sign of a Confederate, or a Yankee for that matter. 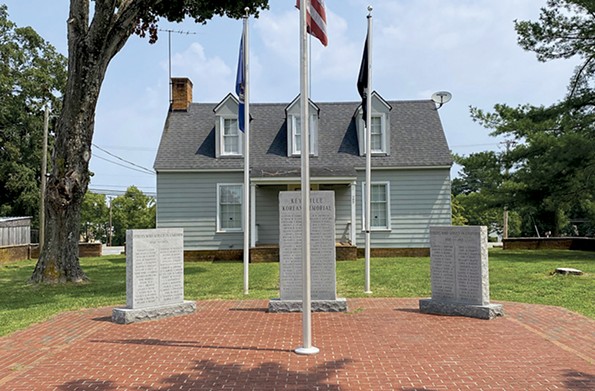 A few blocks away, in the downtown shopping district, the flagship retailer, Rebel Sporting Goods is a major purveyor of firearms of all types, gun safes, hunting and fishing supplies, and a deep selection of uniforms for Civil War re-enactments. It is closed this afternoon. 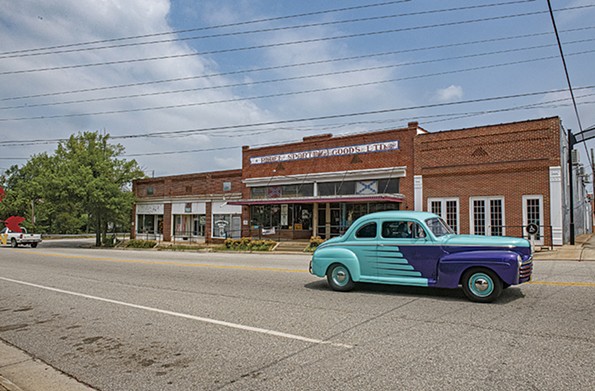 “Did you see the ice cream shop?” Elmquist asks as we pass the King Street Church downtown, which occupies the former Tri-County Ford automobile dealership complex. The fellowship’s Sundae Service ice cream shop is not fancy, but the selection is excellent and the service efficient. It’s his first day on the job and Tristan DeLaura asks: “Waffle cone or cup?” as he digs deep into the freezer to find the vanilla container. “The shop is run by the church’s teenagers, it teaches them basic skills,” says Dylan Davis, 29, a member of the congregation who lives nearby, “We may open a coffee house.” Sundae Service is understandably closed on Sundays. 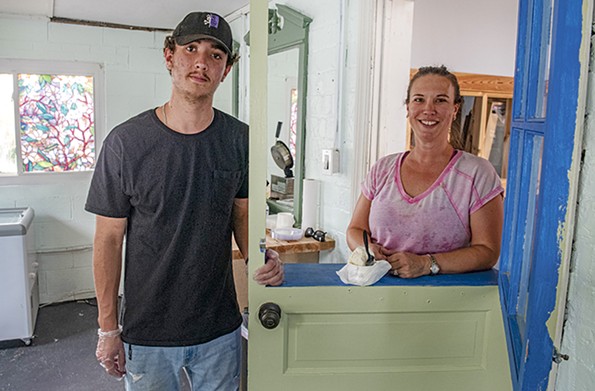 Davis commutes weekdays to Farmville where he is on the staff of the Crossroads Rehabilitation Center, which works with clients in half a dozen surrounding counties recovering from substance abuse.

“This is the slowest town that I’ve ever lived in,” says the former San Franciscan, but he says that he is impressed by the kindness of many of Keysville’s residents. “The people are willing to help you a lot. A guy stayed up until one in the morning on a Saturday recently trying to figure out how to fix my truck.” The Dodge Ram was repaired by Sunday after various local parts and repair shops pitched in. 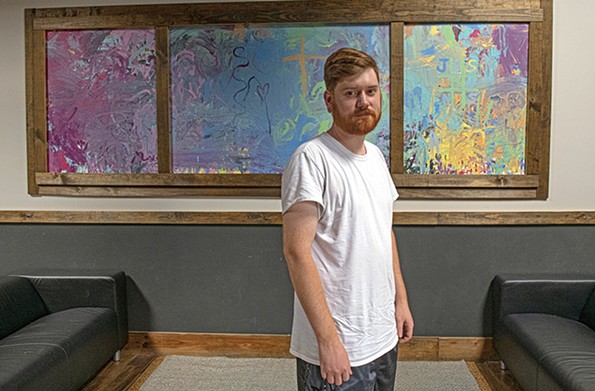 It’s midafternoon, but before leaving town we stop by the Bretcetera antiques to retrieve some purchases made earlier. Shop owner Peaden mentions that Keysville is in the early stages of beginning an architectural survey to perhaps apply for historic preservation status. He mentions that solar farming may be a future economic driver for the region. Later, I was informed that a Northern Virginia-based company is seeking to develop the 5,800-acre Randolph Solar Project in the southern part of the county, a  $700 million endeavor.

Peaden also recommends we stop by Ethel’s, another local dining destination on our way back to Route 360 and Richmond. On the outskirts of town behind a white horse fence, we discover an old-style concession food truck, freshly painted with carnival-style graphics across the road from Southside Community College. Its owners and cooks, Larry and Sandy Yoli, are in high gear at the order window and over the grill as a stream of patrons line up.  The husband-and-wife New Yorkers set up shop 17 years ago and list Gyro Combos, Italian sausages, “Belt Buster burgers,” and strawberry cheesecake on the menu. Elmquist orders a peach milkshake. Larry Yoli offers me a sample of the same.

I will return to Ethel’s. 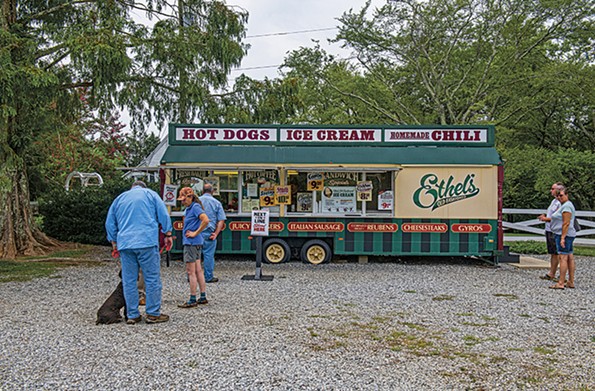 At 2:30 p.m. we are driving headed up Route 360, wondering aloud what we think Hull Street Road traffic will be like near Woodlake and Brandermill. About that time we spot a roadside vegetable and fruit stand and pull in at the Country Basket at Sunny Slope Orchard. I select some tomatoes and damson preserves. We both take home a basket of peaches. Our purchases are carried to our vehicle by a polite, hard-working student from Nottoway High School. 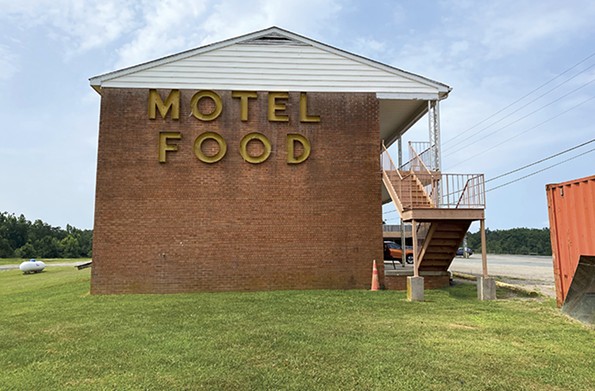 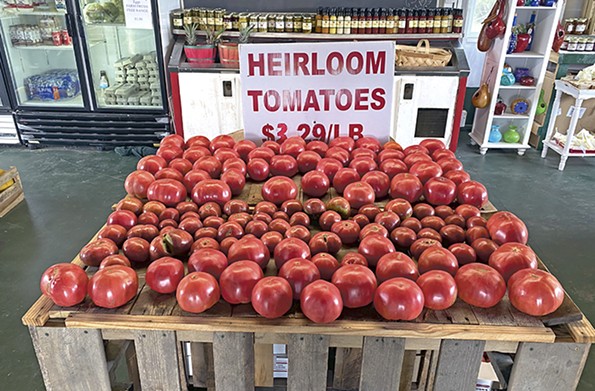 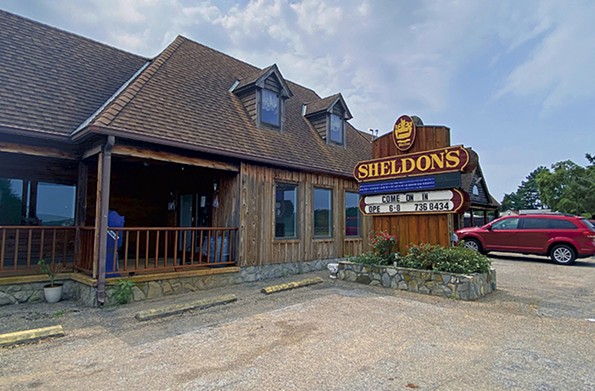 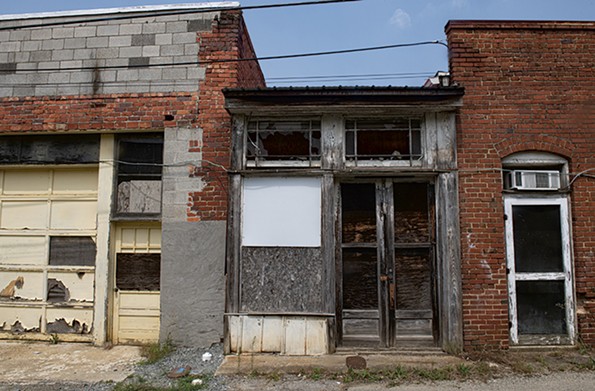 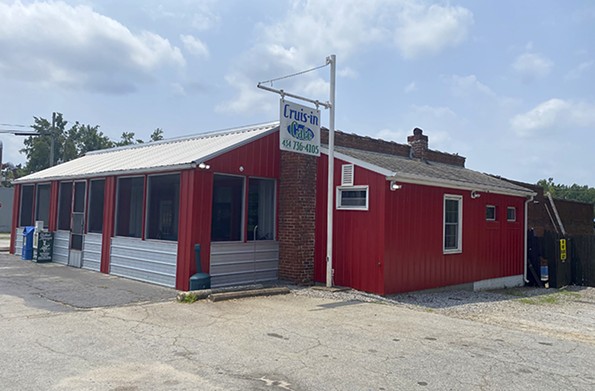 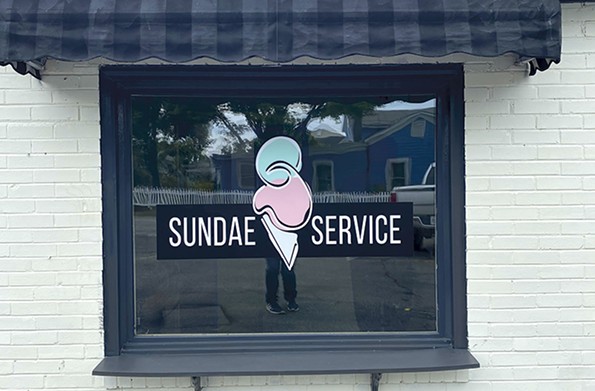 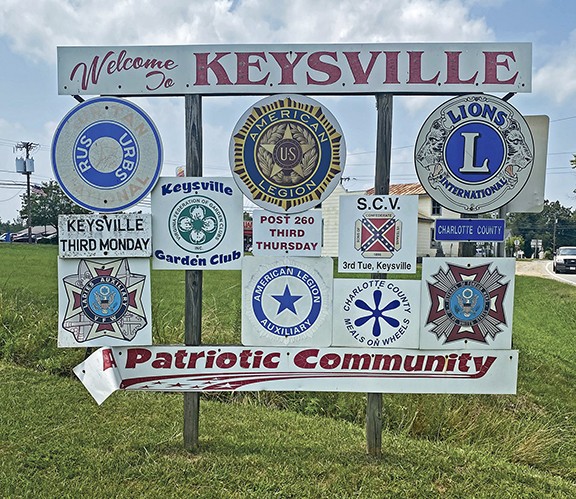