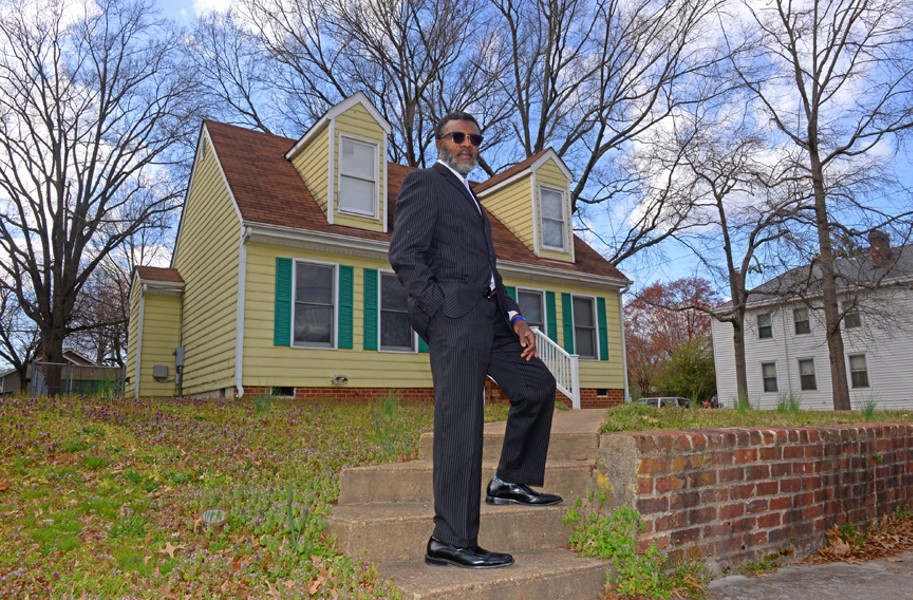 Oludare Ogunde didn't plan on staying in the U.S. for very long. A native of Nigeria, he began a master's program studying medicinal plants at the University of Maryland in the early 1990s. But when his brother, who also lived in the States, went to prison just a few months after he began graduate school, everything changed.

"I was traumatized by him being incarcerated," Ogunde says. "I had to carry the load myself, and that's when everything went south."

Ogunde says he attempted to help his brother from the outside, which eventually sent him to prison on convictions of credit card theft, fraud and forgery. He spent nearly 18 years behind bars, and this May will mark five years since he walked out a free man.

The goal is to inform new policies and allocate more resources that address those root causes. The report was a culmination of two years of research and analysis, and Herring and Shabazz want to facilitate wider community discussions about addressing crime and public safety.

Ogunde says it's an admirable effort, and he agrees with the notion of preventing rather than reacting. But as someone who's been deeply entrenched in the criminal justice system for decades, he's wary of potentially empty promises from bureaucrats.

When Ogunde left his cell for good in May 2014, he had what a lot of returning residents don't have: a stable home. He met his wife while he was incarcerated, so by the time he rejoined society, he had a support system, a roof over his head and access to transportation. Shelter and transportation, along with steady employment, can make or break a person returning to society, he says. Without access to any of that trifecta, newly integrated ex-convicts can easily fall between the cracks and find themselves in desperate situations that often land them back behind bars.

That's where Ogunde's nonprofit comes in. Drawing on his own experiences navigating the transition from prison to society, he co-founded Project Give Back to Community with Clovia Lawrence of 99.3-105.7 Kiss FM in 2015. The organization provides services to people who have done their time in the form of temporary housing, transportation, employment assistance and support groups.

Ogunde and his team also lobby local and state legislators for new policies that restore rights and provide better care for returning residents. In an effort to improve transportation access, for example, Ogunde says he's lobbying for a city policy that would grant free bus passes to newly released prisoners for their first six months to a year back in society. Simply gaining the ability to get around can empower them to access more job opportunities and services that are available.

One of the greatest challenges, he says, is starting those conversations with legislators early — not just when the General Assembly is in session.

"I have friends on the Republican side and I have friends on the Democrat side. I'm not partisan," Ogunde says, adding that he tries to sit down with lawmakers all year-round. "If you wait until December, everybody starts rushing with all their bills, and you're not giving [them] enough time to do it right."

For Ogunde, one factor included in the root cause analysis report is especially compelling to him: trauma. In a paragraph that Herring calls "intentionally provocative," the section on trauma describes the process of abuse, dysfunction, neglect and community violence shaping bad habits. "In this context, crime is not always a function of personal choice," it reads. "Sometimes crime is a manifestation of a person's effort to cope with environmental and social deficits."

Sixth District Councilwoman Ellen Robertson, whose neighborhoods see some of the highest crime rates in the city, has been trying to chip away at these issues for years. In 2012 she formed an alternative to incarceration advisory board, and says she often feels like she's "spinning in the mud." One step in the right direction, she says, is bringing people like Ogunde to the table.

"I can talk about trauma all I want to, I can read all the books on trauma," Robertson says. "But when I go to the city jail and have conversations with the inmates and when I ask when they started getting in trouble, how they were doing in school, what their family life was like at the time, the amazing stories that come out of that are truly the answers to where we need to focus our attention."

Having interacted with thousands of criminals both in prison and in society, Ogunde says every single person tangled up in the system can trace the beginning of his or her problematic behavior to a single traumatic episode. For him it was the incarceration of his brother, and the helplessness and despair that followed. For others it may be abuse at home or witnessing a violent crime, which he says can have a lasting impact on people, especially children.

Prison itself is also traumatic, Ogunde notes, and five years out he's still grappling with the effect of his own incarceration. He says society's expectation for a person to "be normal" immediately upon re-entering society is unrealistic and unfair, and making communities safer by preventing more crime and reducing recidivism is the responsibility of the ex-convicts and society alike.