On the Clink of Greatness

Why the new city jail is more than just a jail. 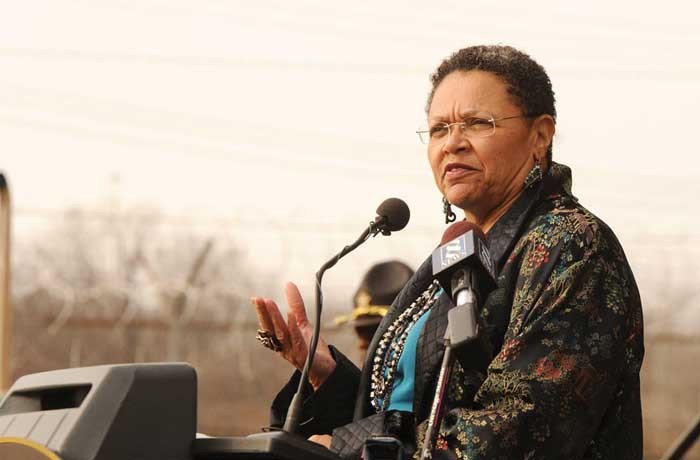 On a breezy, overcast Friday afternoon inside the fenced, razor-wired yard on the southern side of the city jail, 150 of the city's best and brightest — more than half of them sheriff's deputies — celebrate the victory that isn't.

Mayor Dwight Jones finally has his party, breaking ground on a $134.6 million jail. But after all the political consternation and back-and-forth over the project's bidding and fairness, portraying the new justice center as a political triumph isn't easy.

"Given the choice of things that I would have liked to have done, this would not be at the top of the list," Jones tells the crowd. "It is not something I have wanted to fight for, but it is an issue that I did fight for because I recognize, and I know you recognize, that it's the right thing to do."

Jones had been pummeled about the mishandling of the project — for things as varied as fairness of the procurement process, multimillion-dollar consultants and an alleged lack of minority participation — before the first shovel broke soil. During Friday's event, the most striking prop is a shiny green bulldozer, with speckless, oversized wheels, west of the podium.

The city is building a jail that doesn't look like a jail but is a "beautiful addition to the landscape," Jones says, and already is a "catalyst for the redevelopment of an entire community." Scheduled to open in January 2014, the jail will house 1,032 inmates, about 500 or so fewer than at the existing facility.

Sheriff C. T. Woody quotes Mohandas Gandhi and says the new jail essentially will graduate Richmond into the ranks of great cities. He thanks City Council Vice President Ellen Robertson, "who spends just as much time inside our jail as she does out of the jail." Not with "shackles," she points out, but as a concerned politician and resident.

Robertson, who represents the Eastview community behind the jail on Fairfield Way, approaches the podium clutching Michelle Alexander's "The New Jim Crow." She rails about the failed anti-drug policies of Ronald Reagan, and how his war on drugs only led to mass incarceration of nonviolent drug offenders, most of whom are black. The city has pledged to reverse the course, she says, to spend less money on locking up drug offenders and more on treating them.

But she also pledges that the city is working to stop the entry of drugs into the community, a chief aim of Reagan's drug war, which failed miserably.

And you thought it was only a jail?