Inside the touring life of music photographer Joey Wharton.

Tall and lean, he's dressed in black with a tousle of dark hair and a black mask, black camera with a chunky wide-angle lens. A photo ninja, he moves like a shadow behind the drum kit, steals in for a close-up of the pedal steel guitar, then slips to the back of the room for a shot of the band through a crowd backlit by brilliant stage lights. He fades into the background, but after the show is over, the wires coiled and the amps boxed and loaded, it will be this photographer's fleeting images, shot from odd angles, that remain.

Wharton's live shots are dynamic, filled with high, off-kilter energy that captures the passion of performance, from intimate close-ups to angles so vast they swallow the crowded room whole.

But he didn't start out wanting to be a photographer. With a VCU degree in graphic design, he was the creative director for several regional print publications, including Chesterfield Living. Wharton, whose final school project was a pop-up book about fonts, wanted to bring a more updated aesthetic. But the photography they were using, while competent, didn't fit. "I realized the only way I was going to get what I needed was to do it myself," he says.

His girlfriend, now his wife, Emily, already had a camera. It was a vintage semi-pro Canon, early 2000s, that she had gotten as a graduation gift, but it still sat idle in the closet. He went online to research the essentials - aperture, shutter speed, and ISO tradeoffs. Then jumped into the deep end.

"What is the hardest possible thing I could photograph to figure this thing out? he asks. "Oh! Live music."

His first band shoot was at the Good Day RVA festival at Hardywood Park Craft Brewery in May 2014. It turned out to be a life-changing event. "Some of the people I met became lifelong friends," he recalls. And the bands became clients.

Wharton later toured with popular local bands Trillions and the Sleepwalkers when they went on tour with national act, the Lumineers. Even for seasoned professionals, nailing sharply focused musicians in tricky lighting is a technical challenge. Of the 500 shots taken that day, he estimates maybe 15 were usable. But the ones that worked reflected his compositional talent and became the starting point of a journey that continues today.

Wharton intersected with Raleigh-based American Aquarium when they played the Ashland Theater in 2019.

"I believe the promoter had hired him to come to shoot the show," recalls band leader BJ Barham. "I fell in love with his work immediately. His colors and tones are unmistakable, and he is such an infectiously fun guy to be around. We brought him out on our next tour, and he's been with us ever since." 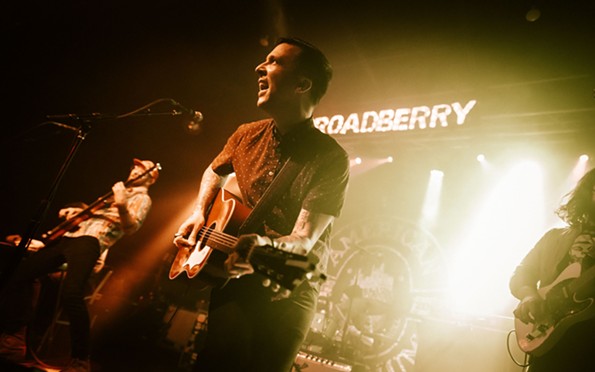 Their current excursion started with a week at Sonic Ranch, the Texas studio where the band recorded "Chicamacomico," its forthcoming album with Bon Iver producer, Brad Cook.

"It was cool just to be a fly on the wall and watch songs written by one guy on a guitar come together for the first time with the whole band," Wharton says.

The dark desert skies, glittering with stars, gave him the chance to experiment with astrophotography. Then the band hit the road, wending its way from Texas through the South and then up the coast.

"I love the bus, to be totally honest. It's just something about being rocked to sleep that's very nice. With the lounge in the front, you have a mobile green room, and if you want to be alone, you have your bunk in the back," Wharton explains. "It's so much better than getting three hours of sleep in a hotel room and then spending eight in a crowded van. You wake up parked outside the venue, and you can go out and wander and explore a new city."

Even with ever-changing locations, there is a rhythm to every day. "I try to have a reasonable bedtime, get up sometime before 8 a.m. to cull through the photos I took the night before - reducing 1,000 photos to maybe 100, to turn around a little show recap. I try to make every day unique, always keep a camera handy to capture some unexpected moment with one of the bands."

For Wharton, it's all part of the story, and it ultimately leads to "the epic rock show and another chance to capture that energy. Then hang out for a bit on the bus, go to sleep, and wake up in a new city."

A vital part of the process is scoping out the venue.

"Just like if you are doing any kind of shoot," Wharton says, "a portrait or a wedding, you scout the location. I know I'll be able to stand here or over there, visualize how I will get what I need by the time the show starts. And then I wake up the next morning with an amazing set of images."

His kit is composed of high-speed, fixed-focused lenses with a particular fondness for close shots with wide-angle lenses.

"I pretty much keep a 20mm lens on my camera at all times and only take it off if I want an isolated pic of a single performer."

The intent is to provide a unique perspective.

"You can watch from your seat in the audience, and that's cool. But the photos I turn over, taking within a foot of the camera, really put you in their face. And that lens adds so much depth."

As a designer who cut his teeth on Photoshop, Wharton uses the nearly infinite control of digital editing to realize a set of unique, recognizable palettes.

"It's always more earth tones for me," he says. "Ninety-nine percent of the time, that is not the color of the lights in the room. They are usually blues and purples. I love warmer tones, and I have always tried to find a way to realize that."

Knowing the set list or structure is always an advantage.

"I know what there's going to be definitive moments, when the bass player is going to make this specific motion, or when BJ is going to walk over to someone, and they'll start playing together."

Each night is unique, but a lot of the song remains the same. And every night has the same basic set of shot objectives: hero moments for the band leader, individual shots of every player, one of the whole group on stage, and, a Wharton signature, a show-ending shot (see below) with the band in the foreground and the audience at the peak of excitement, a mass of waving arms and happy faces. 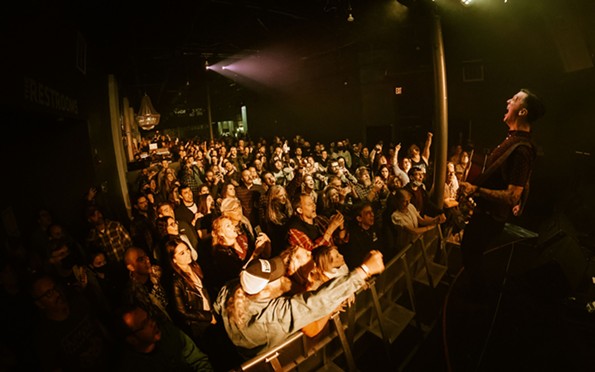 "In a world where digital media is constantly devoured, it's nice to have Joey on your side," Barham says. "He captures the joy and intensity of our live show perfectly and has become such a vital part of how our fanbase sees the band."

The challenge is in the attempt to capture the intimacy at the heart of the rock and roll spectacle. It's not mere documentation but collaboration.

"A big part is that that the band embraces me as more than just a photographer: He's Joey," Wharton says. "We know him, we know what he needs, and we're going to give it to him ... Then hang out for a bit on the bus, go to sleep, and wake up in a new city."