Izzy’s Kitchen looks to be a cozy spot between Park and Patterson. 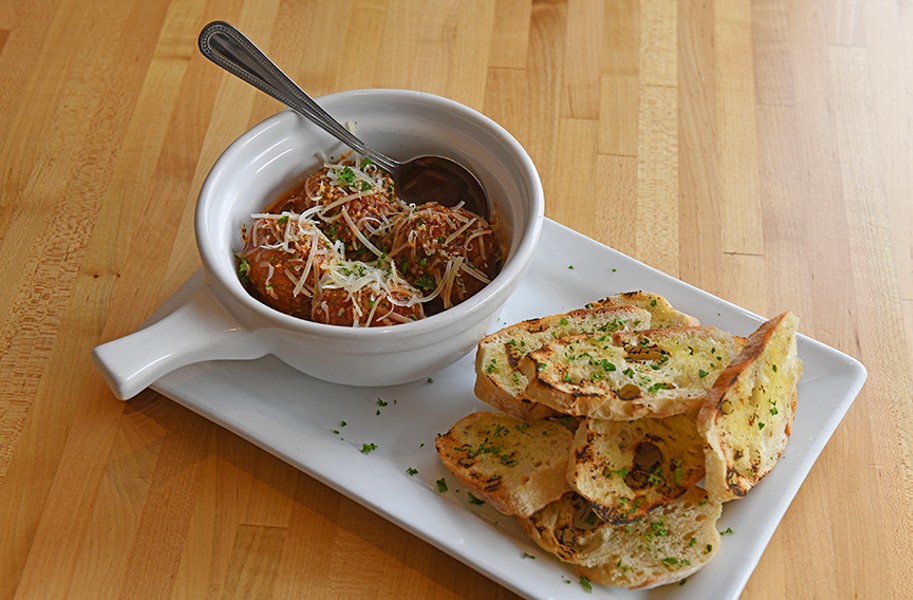 Scott Elmquist The meatball appetizer ($8) served over a pool of house marinara and shaved Parmesan with a mound of grilled baguette slices.

A great neighborhood restaurant isn’t the same as having a great restaurant in the neighborhood. Fortunate as it is to have top-notch eateries within walking distance of home, they can also be pricey, marking them as occasion destinations and not the solution when your day has gone south and just don’t feel like cooking. Again.

For Museum District residents, I can see plenty of great neighborhood restaurant potential in Izzy’s Kitchen, which took over the Little Saint spot between Park and Patterson avenues. Joe and Sharon Carter, former partners at the defunct Uptown Market & Deli, wanted to do a proper sit-down restaurant, so with their established sandwich menu in hand, they added heartier selections like lasagna, chicken, a daily market fish and steak of the day to round things out. Named after their 5-year-old daughter, Izzy’s Kitchen serves lunch and dinner plus brunch on weekends.

Nothing has changed about the layout, with two distinct rooms on either side of a small bar and entrance area, or the row of parking spaces that line the front of the building. As befits a neighborhood place, the patio is dog-friendly, though Sparky must be leashed.

On my first visit for lunch, our server approaches the table moments after we’ve been seated and given menus: “Let me just tell you — because I’ve had to break a few hearts over this — that you can only order from the first page and the sandwich page,” she says quickly. “So no dinner or brunch items.”

Our hearts remained intact given that the first page presents an array of appetizers, including a well-priced Virginia board ($12) of local meats and cheeses, as well as a European board ($12). Hearty and warming with a deep, richly flavored broth, French onion soup ($5) tastes like sunshine on a cold day. Very much on point is a meatball appetizer ($8) over a pool of house marinara and shaved Parmesan with a mound of grilled baguette slices to add a smoky note to the mix. The perfectly seasoned meatballs are also available in grinder form ($9.99) under a blanket of fontina.

Izzy’s proves its deli bona fides with attention to the details that matter when eating out of hand. Given a choice of wheat or artisan baguette when requesting the turkey pesto ($9.49), I wisely gravitate to the satisfyingly crunchy baguette to contain turkey, prosciutto, fontina cheese and roasted red peppers spread with garlic pesto aioli. As our server suggests, it’s a sandwich best served hot and gooey. Equally mouthwatering is the Cubano ($9.49), mainly because the ratio of porchetta, ham, Gruyere cheese, kosher dill slices and Dijon mustard is impeccable, even if purists will cringe at a Cubano on a toasted baguette rather than Cuban bread.

At dinner, I can’t resist the promise of a house-pickled vegetable jar ($7), which delivers splendidly with a Mason jar filled to the brim with carrots, cauliflower, broccoli and onions in a brine that shows off a bipartisan balance of sweet and tang. Follow that with the roasted garlic hummus plate ($9) with its sunburst of cucumbers, olives, pickled red onions, tomatoes, feta, and roasted red peppers surrounding a hillock of hummus laced with olive oil, and I can feel virtuous about whatever follows. One suggestion: More grilled baguette slices please, Joe. Neighbors deserve sufficient conveyances for every bit of hummus.

Not for the faint of appetite and proving that fresh, seasonal and meatless have the power to seduce carnivores, a platter-sized order of eggplant lasagna ($15) brings together house marinara with sliced eggplant, ovalini mozzarella and Parmesan — not to mention a house salad on the side – and guarantees leftovers. The fish of the day was crabcakes ($23) served with lemon saffron rice and grilled asparagus, easily the weakest link of all I tasted. A childhood spent in Maryland means that I’m a harsh judge of crabcakes that aren’t mostly lump crabmeat and minimal filler. Keeping it simple, there’s only one dessert and it’s basic, but does the trick. Our server insists that she fights herself every shift not to get it for her dinner because the brownie a la mode ($5) is so tempting.

In the long-standing tradition of neighborhood restaurants, the servers at Izzy’s Kitchen have a casual, friendly approach, offering advice on the menu and allowing space for diners who don’t want to be rushed or bothered. Although I’d have liked our appetizer dishes removed once our entrees arrived, my only real complaint was at dinner when our server came over midmeal asking if we wanted boxes while one of us was still eating.

Looking back, I can’t help but regret that during the 13 years I lived in the Museum District there was no place like Izzy’s Kitchen nearby. By my estimation, it checks every box for a great neighborhood restaurant except one: it’s closed Mondays.

C’mon, guys, neighbors have to eat seven days a week.