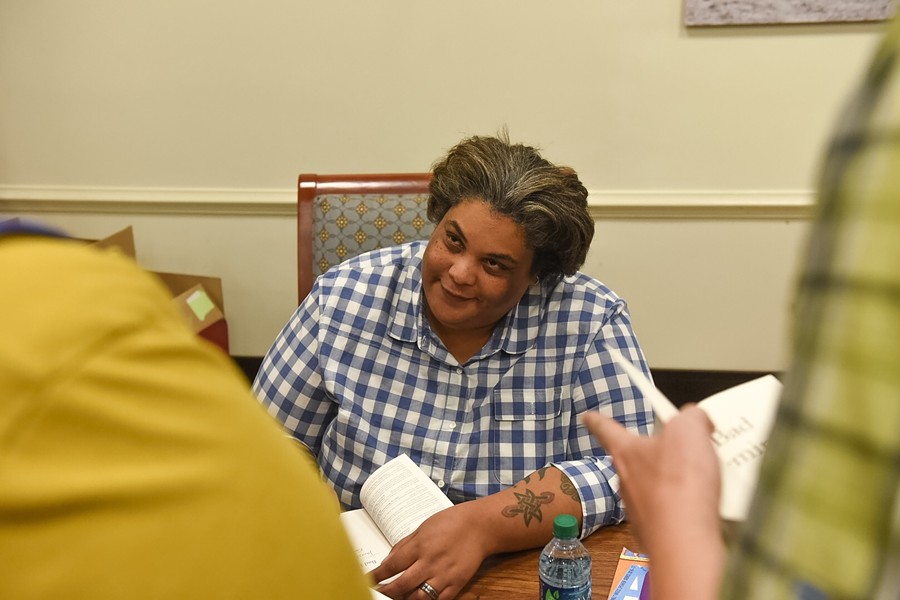 Feminist author Roxane Gay delivered pointed criticism at University of Richmond administrators last night over their response to a student’s public complaint that her rape investigation was mishandled.

The administration’s reply was “defensive at best, … dangerous and embarrassing in actuality,” Gay said. In discrediting student Cecilia Carreras’ story, they gave “their side of the story. As though they get a side.”

She had written the words in an essay the night before, she said, in light of what she read of Carreras’ case and learned in a recent documentary, “Hunting Ground,” about campus sexual assault across the country.

After the event, Gay said the essay would be available online at a later date and part of a future book.

Gay is an associate professor of English at Purdue University, a feminist writer and cultural critic, and contributing Op-Ed writer for The New York Times. She was on campus for a writer series, and spoke to an overflow crowd of about 200 on Wednesday night.

“We will talk about it,” she said, in opening her remarks. “Because I don’t care. Well, I do care, but I’m leaving tomorrow.”

Gay also read two essays from her 2014 collection, “Bad Feminist,” on trigger warnings and being a first year professor.

Carreras accused a student athlete of raping her last year, and evidence suggests that he admitted hearing her say “stop” three times. Many students and faculty are upset that the accused remains on campus, and that the administration attempted to discredit her story while remaining mum on the details.

A number of on-campus discussions, forums and articles in the student newspaper, The Collegian, have resulted in the fallout. A second student came forward with complaints. And the university's president, Ronald Crutcher, recently announced the hiring of a third party to review the university’s handling of sexual assault allegations.

Gay referred to beginning to see her own students -- and members of the administration -- as predators. And she said she was “surprised to see so little said by tenured faculty with job security” in the “Hunting Ground” documentary.

Questions from students at the event ran the gamut, but one asked her to define rape culture. In part, she said: “It’s consent as a murky area. That men can build rockets but they can’t tell when a woman wants to have sex.”

She also said the term can be overused to the point where its meaning is obscured.

Gay was the first in a speaker series this academic year put on by the women, gender and sexuality studies department. One of the students introducing her quoted from Gay’s book, “Bad Feminist,” in which she wrote of universities: “Everyone means well, but there’s a lot of bureaucracy. I prefer common sense.”

The student added, “Us too, Roxane.”