We tracked down some of the area’s most extravagant sushi offerings.

by Laura Ingles and Sabrina Moreno 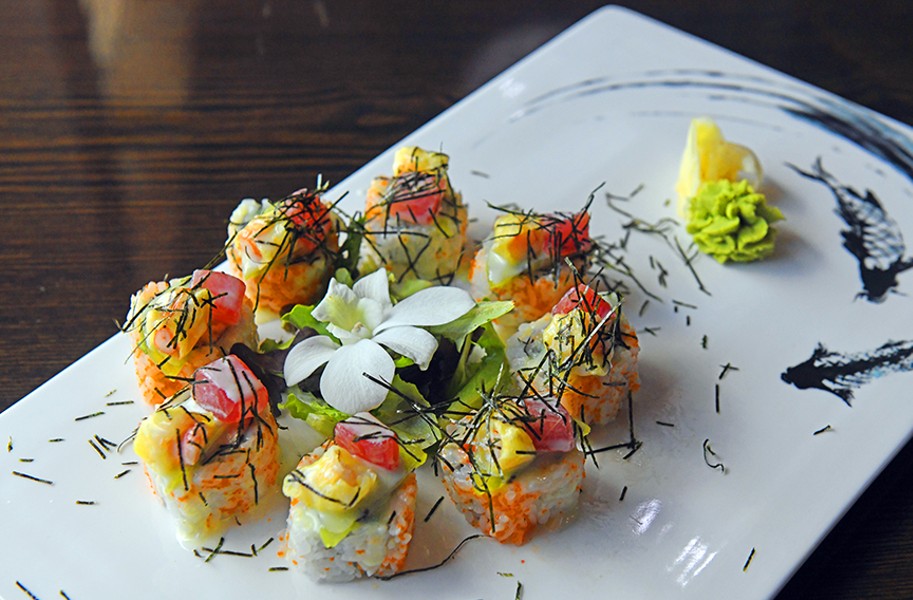 There’s a lot to be said for simplicity when it comes to sushi. A well-sourced cut of tuna or yellowtail doesn’t need much more accoutrement than rice and a bit of soy sauce — and, if you’re in Japan, a blob of wasabi which is customarily served on sushi rather than alongside it.

But there’s a certain allure to those over-the-top sushi rolls. You know the ones — usually featuring multiple types of seafood and any combination of fruit, crunch and sauces, they typically run $13-17 and fall under a category such as Chef’s Special Rolls.

We’re equal opportunity sushi consumers who appreciate the grocery store variety — there’s a time and place for everything — and will try anything once, so we decided to round up some of the most obscure, grandiose sushi rolls we could find. Overall, we weren’t disappointed.

With a name like Level Up, I hoped the spicy crab, rock shrimp, avocado and kiwi roll would be as aggressive as Ciara’s song. Man, did it deliver.

The roll, topped with tobiko and honey wasabi and white sauce, feels like being inside Willy Wonka’s chocolate factory and getting offered the three-course dinner chewing gum. The flavors. The freshness. The kiwi.

It provides the right sweet-to-savory ratio to make you close your eyes and do a side-to-side happy dance. Despite my initial skepticism at combining a little spice with fruit and shrimp, the roll is stacked in a way that allows for each ingredient to take the stage and be the Beyonce to this roll’s Destiny’s Child. The tempura crunch is a bonus.

The best seat in the house is at the bar. It’s free entertainment with its technolike bar top that lights up in neon colors when touched. Shout out to the bartender who encouraged the decision and gave us a few honorable mentions for next time: the Fall in Lover Roll, made with tempura-fried eel, spicy tuna, avocado and cream cheese, and the Dynamite, which gives guests a twist with its spicy scallops, tuna and salmon combination. —SM 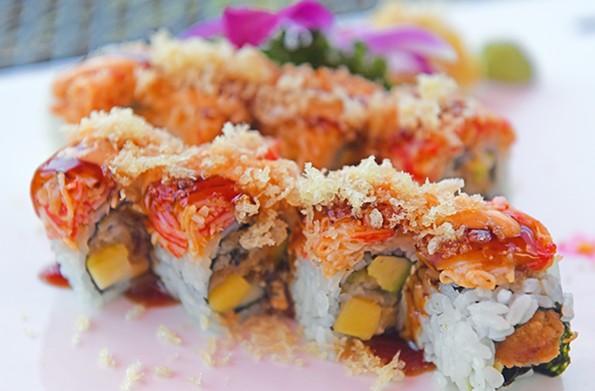 Sabrina and I shared this one, and we agreed that it wouldn’t have crossed either of our radars outside of this story. It doesn’t contain any raw fish, and who puts apple in sushi? Now we know better, and will happily schlep back to Midlothian for this one.

Avocado and apple join fried oyster to make up the base, and the whole thing is topped with baked spicy crabmeat, spicy mayo, miso and eel sauce. After cheers-ing with our chopsticks we each chewed thoughtfully — it’s different, but it works. The texture is on point, with a deeply satisfying crunch and a hint of creaminess from the avocado.

Overall the flavor strikes the right balance of savory and sweet, but because both the oyster and crab are cooked, it’s missing a cool, fresh element. Luckily, we’d also ordered a simple roll of avocado and mango, and thus shimmied out a couple of mango slices and added them to the oyster sushi. Insert chef’s kiss here. —LI 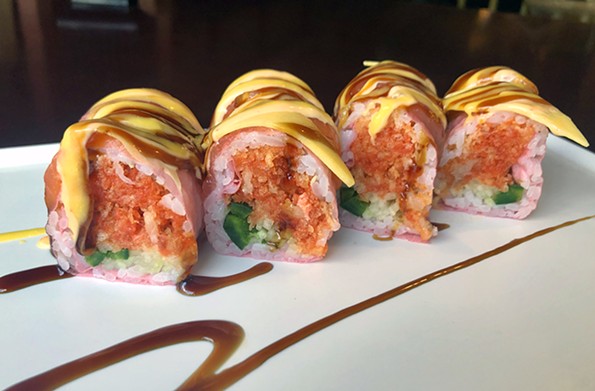 “House of the Rising Sun” sung by Joan Baez — no shade to Bob Dylan or the Animals who covered it in the early ’60s — fuels my inner folk goddess. So naturally, when Miyabi in Shockoe Bottom offers a Rising Sun roll, I’m ordering that bad boy.

The server assures me that the pink soy paper is what makes this roll. On the menu, it’s described as being topped with tuna, salmon, mango and chef’s “special sauce,” which initially looks like a milk and white chocolate drizzle.

Stuffed with spicy yellowtail, spicy tuna and cucumber, the roll’s ultimate saving grace is the jalapeño. If this roll was a person, it’d be the one you tell your friends “you just have to get to know them.”

Why? Upon first bite, I’m reminded of ice cream mochi, the pastel, rainbow-colored Japanese desserts available in the freezer section of most grocery stores now. Its squishy, spongy texture is unexpected and makes me inspect the roll to ensure it’s actually sushi.

Then I take the second bite. And the third. And the fourth. Each individual piece somehow improves the flavor of the last and I find myself soaking them in the leftover special sauce, which offers a creamy balance to the jalapeño. —SM 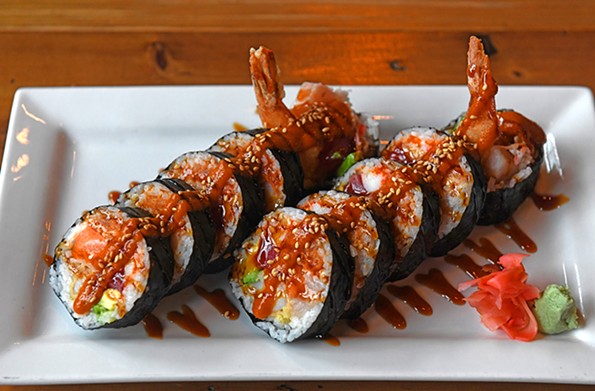 The experience at Fighting Fish is described by one word: Owen Wilson’s “wow.”

If you’re someone who craves the hole-in-the-wall feel or wants to get away to a space reminiscent of La Maison in Montmartre in Paris, Fighting Fish checks the boxes.

But while you stay for the pink walls and quirky mermaid art decor, come for the Monster Roll. It’s certified as “we’re talking big” on the menu, and with six types of fish, technically five if you don’t count spicy tuna and tuna as separate entities, and it’s easy to see why. Its main selling point? The fire and kabayaki sauce combo.

It brings out the snapper, shrimp tempura, lump crab, salmon and tuna jam packed into a seaweed-wrapped roll. The tingle from the spice felt like it was whitening my teeth at times, and oddly enough, it only made me want to continue my consumption of it. Inadvertently, this roll makes you the most hydrated person on the block because you’re consistently downing water.

Its tangy aftertaste lingers comfortably rather than retaining an overbearing flavor. 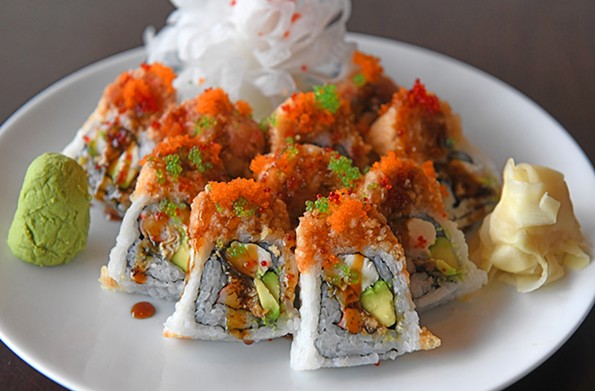 That whole “it’s the inside that counts” adage may be true when it comes to dating, real estate shopping or constructing a cheeseburger. But on the specialty sushi front, let’s not forget about those unsung heroes: the ingredients that end up on top.

Akida’s namesake roll is stuffed to the brim with crab stick, eel, shrimp, avocado, cream cheese and tempura batter. Upon first glance, diners might assume that shrimp and multicolored fish roe are alone atop the rings of rice, but underneath the shrimp rests lobster salad, spicy tuna, spicy salmon and three kinds of tobiko. The flavor of one fish doesn’t overpower another in this seafood medley, and the tempura’s crunch, the silky cream cheese and avocado and the pop of the tobiko tie it all together.

The top portion could almost serve as its own separate roll, but cutting a roll in half is considered a Japanese faux pas. It’s customary to eat each piece in one bite, so I recommend unhinging your jaw and going for it to get the full effect. —LI