On a High Note

VCU's Final Four-winning Peppas gain recognition as a pep band like no other. 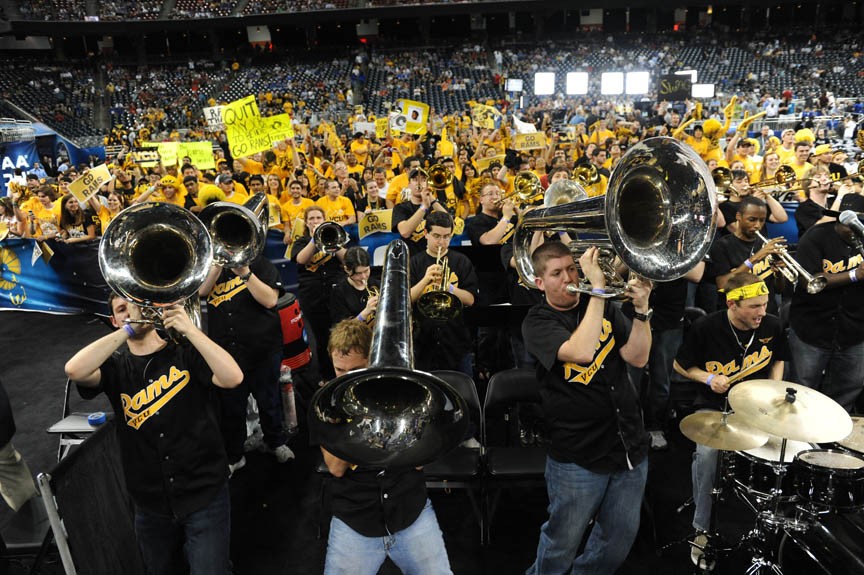 There were times when Ryan Kopacsi thought he was done. After Virginia Commonwealth University's athletic director, Richard Sander, left in 2006, Kopacsi was nervous. A new athletic director, he feared, might not want to deal with an unconventional pep band such as the Peppas. Then the university changed presidents, and the old anxieties came back.

None of his fears were realized, of course. Instead, VCU's pep band and Kopacsi, its bold director, have grown into crowd pullers themselves. Whether belting out tunes while floating on a canal boat alongside San Antonio's River Walk, or beating Butler University in the Final Four Battle of the Bands, the Peppas' freewheeling, swinging style has found converts in Richmond and beyond.

"People on the streets would stop us and talk about the band," says Tanya Buresh-Werby, who moved from Richmond to San Antonio in September and attended the Rams' Sweet 16 games at the Alamodome with her husband. "They just really enjoyed the music."

While most of the ink spilled in the nation's newspapers has focused on the university's basketball team, the pep band emerged as a star in its own right, drawing attention from The Washington Post and The San Antonio Express-News as well as sports blogs such as Deadspin. Search YouTube and you'll find dozens of performances. Facebook pages have even sprung up that are dedicated to getting the band a spot on late-night television.

"Everybody feels like there's congratulations in order, and we really appreciate that," Kopacsi says.

The Peppas' loose style, which owes much to the brass bands of New Orleans, has proved instrumental to their popularity. Over and over, people say that they love the band for precisely what it isn't — a traditional, staid pep band populated by rigid musicians who play the same tired songs game after game. "They are just not your stereotypical pep band," Buresh-Werby says.

For all the attention the Peppas have received recently, the story behind their success isn't exactly one of an underdog band proving itself. Talking with band members, it's clear that they have long had a sense of their ability to get a crowd pumped up.

"This band has always had a sense of, I don't want to say arrogance, but we like to support ourselves and promote ourselves," says Mitchell Reed. A 2009 alumnus and band director at West Point High School, Reed is one of the few members who isn't a current university student.

Says Leslie Lopez, a piccolo player and VCU junior whom Kopacsi describes as his right-hand woman: "It's sort of overwhelming, but at the same time, it's been a long time coming."

Lopez remembers one of the bright moments in San Antonio came when two Canadian couples who'd been attending NCAA tournaments for years approached the band. "They said they've never seen a band like us — ever," she says.

For his part, Kopacsi says he's thrilled to see the band members get the attention they deserve. Around Richmond, Kopacsi has been known for a while as a colorful character. He'll take his shirt off during performances. He's done some modeling on the side. He's rappelled into the Siegel Center. As much as he enjoys the spotlight — and there's no doubt he does — he wants the band's rank-and-file in that spotlight with him.

The band's membership is a motley bunch: pre-med majors and art history buffs, first-year students from Richmond and nontraditional transfers from around Washington. A good many aren't music majors but are students who want to keep one foot in the music world. Some, like Scott Pinkstaff, are people who decided to dust off instruments that had collected dust for years.

"I was really rusty, but they took me anyway," says Pinkstaff, a transfer computer science major who joined in the fall. "Needless to say, my skills have really improved over the last few months."

Rebecca Morrissette, a freshman, says there's a lot of varying abilities among the tight-knit group. "You've got to be able to play your instruments but after that, you've got to have the energy," she says. "You've got to relax and have fun."

Much of that fun comes from the music the band plays. In addition to the Top 40 songs the crowd easily recognizes, the Peppas draw upon Richmond's own No BS Brass Band as well as the Youngblood Brass Band and New Orleans' famed Rebirth Brass Band. Reggie Pace of the No BS Brass Band wrote some of the Peppas arrangements a while back and counts among his bandmates several former Peppas. "They're really great," Pace says. "They bring a lot of attention to the school in an entertaining way."

Kopacsi wants to continue to play local music, but he also wants to incorporate selections from the Dave Matthews Band and world music groups. He says he's continuing to study bands from historically black colleges and universities.

"To me, it's about how the music makes me feel, and if it gets me excited, then I'm playing it," he says.

Within the next month or two, Kopacsi hopes the band will record a CD. Details aren't nailed down yet, but he hopes it will include seven to 10 songs.

Kopacsi says he knows the band isn't the university's most musically advanced. He's quick to note the abilities of the Symphonic Wind Ensemble or the nationally known faculty. What the Peppas are, he knows, is the most visual. And that, coupled with its recent success, leaves him feeling the pressure. Each spring, he begins to wonder how the band will get better the next year. And after all of the attention, and winning the Final Four Battle of the Bands, the Peppas are in everyone's sights.