Flaggers defend Southern “birthright” while another group counters with a flag raising of its own. 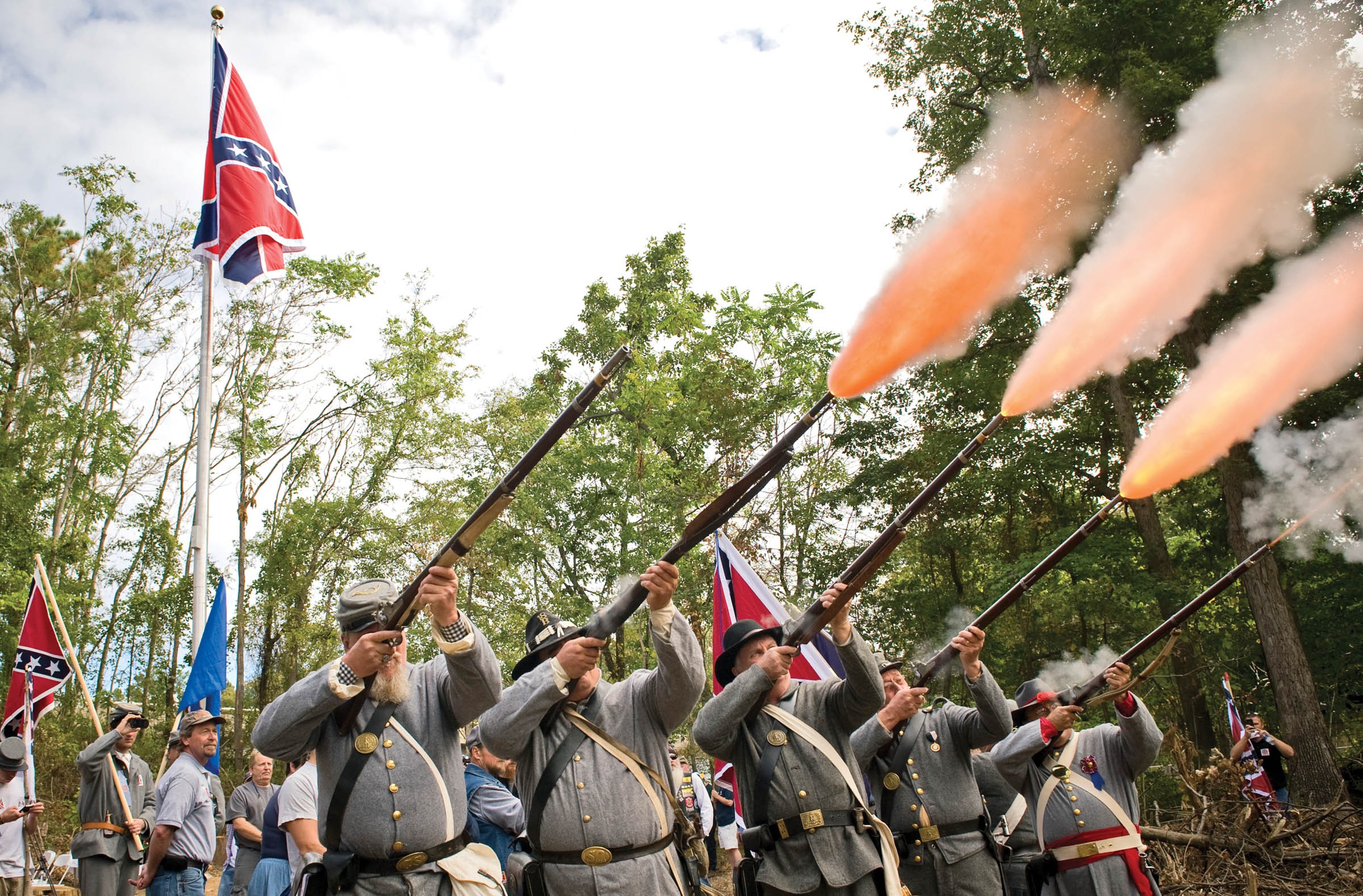 While a wool-uniform clad bagpiper plays over the din of highway traffic, a color guard raises a Confederate battle flag atop a 50-foot pole next to Interstate 95 in Chester.

The Virginia Flaggers say their raising is in defiance of what they see as an attack on Southern heritage by two enemies: historical revisionism and political correctness. This Chester location is ground that's "strewn with the blood" of Confederate ancestors, the group says.

"It's about the soldier," founder Susan Hathaway tells about 200 supporters at the event Saturday, many of them wearing Confederate uniforms and holstered handguns and bowie knives. "God bless the Confederate soldier and God bless the South."

Before announcing plans for the 15-foot wide flag in August, the Flaggers were best known for protests outside the Virginia Museum of Fine Arts, which had removed a Confederate flag from a memorial chapel on the property, a former Confederate veterans' home.

The group's announcement that it would fly a much larger flag on leased private property next to I-95, the major north-south freeway passing through Richmond, sparked national headlines. It also provoked local debate about how Richmond should approach its past as the Capital of the Confederacy.

During Saturday's flag raising, with its musket fire and singing of "Carry Me Back to Old Virginny," another group calling itself United RVA raised a U.S. flag next to Richmond City Hall, about 15 miles north.

"Virginia's been around for about 400 years," United RVA member Brian Cannon says. "That [Confederate] flag was a symbol of Virginia for about four years, about one percent of our history. It shouldn't be at the entry point of our community."

Cannon is among 30 others who formed the group, which aims to counter the message the Flaggers are sending about Richmond's history. The group's online petition opposing the I-95 Confederate flag has received about 25,000 signatures.

In Chester, Hathaway and others address opponents, saying the Flaggers are defending the birthright of Southerners — and that their actions have been applauded nationwide.

"I am overwhelmed at the outpouring of support from across the Confederacy," Hathaway says, noting some people have traveled from as far away as Missouri and Texas. "Flaggers speak for those who have no voice. Our weapon is the Confederate battle flag."

For all the furor, the flag is barely visible from I-95. Trees lining the highway block the line of sight. The group says it will clear the remaining trees obscuring the view and place a fence around the perimeter. For now, a "Keep Out" sign is posted at the clearing.

Before concluding the ceremony with "Dixie," Flagger Barry Isenhour issues a call for others to join him at VMFA afterward with their Confederate flags.

As for United RVA's flag, Cannon says the group plans to find a permanent home for it. "There will be an American flag flying much longer than there will be a Confederate flag flying in Richmond," he says.