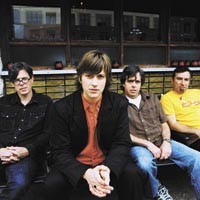 Their name may reference a monumental train wreck, but their career has been anything but an accident. The alt-country group from Dallas, which takes its name from the popular ballad "The Wreck of the Old 97," first gained recognition as a bar band covering Merle Haggard and Johnny Cash songs. The Old 97's have released 11 albums since 1993, and after all this time, their music has crept into some strange corners, like an episode of "Scrubs" and commercials for Chili's and MasterCard. Sleepercar joins the Old 97's at Toad's Place Sunday, July 27, at 7:30 p.m. $18-$20. 648-TOAD or www.toadsplacerva.com.