Why a man puts his dog in a scooter sidecar — and why people love it. (It’s the goggles.) 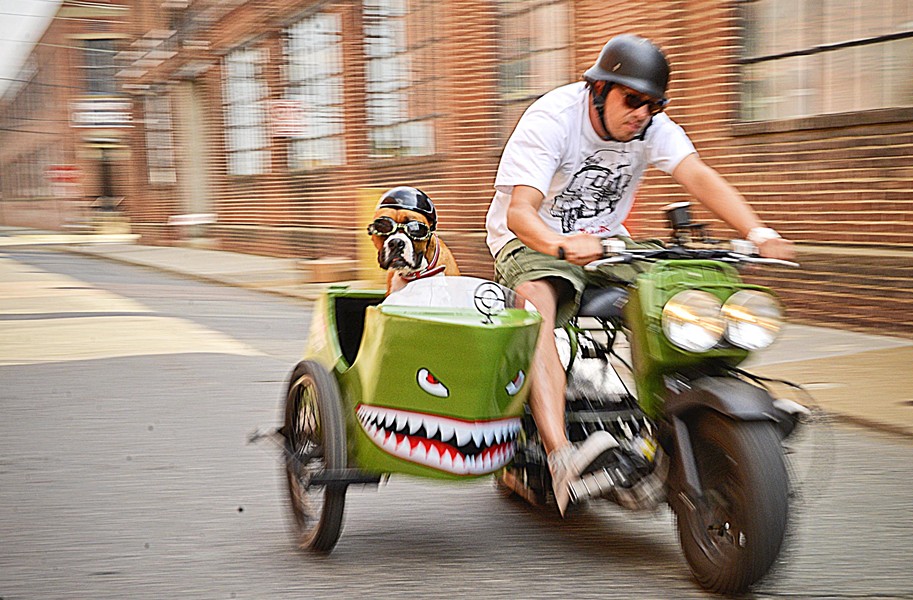 Gordon Smith is a 34-year-old salesman who drives across Richmond on a scooter with his dog, Maybellene, in a homemade sidecar. Nearly everyone who sees them stops to regard the pair with a mixture of awe, confusion and smiles.

Style: How did you decide that you were going to be the guy who drives around on a scooter with a sidecar and a dog in it?

Smith: You see that scar on Maybellene's leg? She broke her leg when she was a four-month-old puppy — she roughhoused and just jumped really high. So I felt so bad when it happened. I said, "I'll still get you around — you know, you can still get the fresh air, you don't have to walk." So that's when I decided to build a sidecar for my scooter.

How did she take to it?

Right away. No problem.

Did you have the little dog helmet and the goggles in the beginning?

The goggles were on backorder because they were camouflage to match the green scooter. There's an Army theme.

And really, Maybellene was just happy to wear goggles?

For a minute, she was like, uhhh, but now she knows it means we're going for a ride. She just puts her head down and I'll put them on. She'll try to move them a little bit, but usually she'll just chill with them. I'll go in stores and she'll sit with her helmet and goggles on while people come up and take pictures while I'm inside the store.

Are the helmets and goggles a safety thing? Or are they just to look cool?

Well, it's a style thing. I have to wear a helmet and goggles, so I got her a helmet to match my helmet. The goggles, that is kind of a safety thing because rocks can fly up.

A dog in a helmet is just cute.

It's just plastic, but it makes her look more badass.

Do you get stopped all the time by people wanting to take pictures?

Yes. Some people even try to direct me into the lighting and shade they want me to be in. It's like, slow down.

Does it ever get old?

I mean, no. It's just smiles. Honestly, the smiles when people see it — people behind me driving taking photos. I like seeing people smile. One of the reasons I made it, you know, the helmet and goggles are part of the smiles. I just like it. I like when people look at it because I took the time and effort to build it.

I would think an adult man could only ride around on his scooter with his dog in the sidecar for so long. What are your plans for the future?

I'm actually looking into making a full-size bike and maybe doing some stuff where me and her travel the U.S.