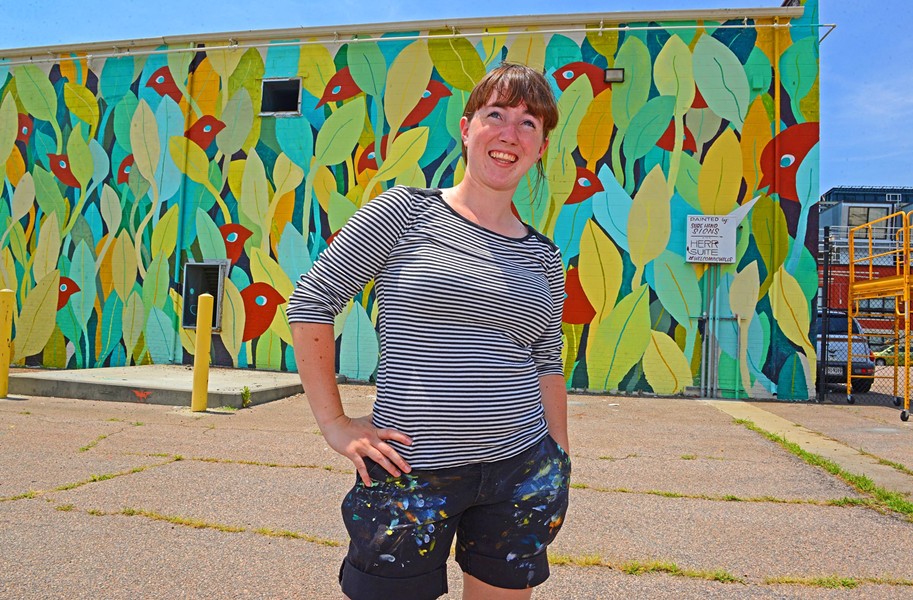 Richmond loves murals, but Emily Herr isn’t your typical muralist. She integrates her paintings with the surrounding structures, complementing them instead of overtaking them.

Consider her recent project on Patterson Avenue, where she hung 24 panels on the chain link fence surrounding Chesapeake Bank’s construction site. The panels portray local haunts such as the Westhampton Theater, but are small enough to allow brief glimpses of the men at work.

Now Herr, pronounced “her,” is getting another chance to think outside the wall. This summer, New Normal Apparel in Jackson Ward will place Herr’s work on eco-friendly, made-in-the-U.S. clothing. She hopes it will help build her burgeoning mural business, called Herr Suite.

“There’s definitely a ‘boy band’ of muralists in Richmond, funded by Altria,” she says, without a note of resentment in her voice. “I think about being a female in a male industry a lot, but try not to focus on the negative.”

She has good reason to focus on the positive. In the past year, Herr Suite’s business has skyrocketed, with such clients as Halcyon Vintage, Sefton Coffee, Social 52 and the Children’s Museum of Richmond.

Springtime is Herr’s latest muse. For her collaboration with New Normal Apparel, shirts and change purses feature her collages of leaves, petals and shoots.

A change purse seems especially apt for Herr, who’s a self-described “yard sale fiend.” It started early in life. Armed with a physical map and a load of change, Herr’s mother organized expeditions every summer Saturday, lasting as long as five hours.

As a child, Herr says, she often didn’t understand retail prices in stores because of that nickel-and-dime heritage. “I’m very practical,” she says.

Her current setup involves a Broad Street studio and what she refers to as the mural mobile — a 2002 PT Cruiser once owned by her grandmother.

“The mural mobile holds my scaffolding, a humongous stack of brushes, my paint stock, two suitcases full of clothes, and a front-seat passenger,” she says. “It’s cozy.”

Still, she’s considering an RV so she can have a studio on wheels. She says there’s a surprising amount of funding for street art festivals across the country.

“If you can get on that circuit, it’s lucrative,” she says. “I know I want to travel and paint, but I’m not sure I want to take the route of mural fests.”

Of the 35 murals she’s painted in the past year, 10 have been commissions out of state. Some of her work might be licensed, too. Chesapeake Bank is considering whether Herr’s portraits could work as greeting cards. Her thoughts on this sudden rise to success reveal a healthy sense of humor.

“I think I need an intern — no, an accountant,” she says, laughing. Herr was an intern herself only a few years ago, and graduated from Virginia Commonwealth University in 2013, where she studied illustration and design.

Her fascination with book illustration and comics is highly evident in Herr’s murals. Her style is childlike and occasionally surreal, full of whimsy. There’s a detectable dose of Americana. And while her favorite subjects, plants and animals, are depicted with a touch of fable and fairy tale, Herr’s style contains streaks of realism.

“I’m not so influenced by street art and graffiti,” she says. “Really, the point for me is to not be on a square. Pipes, windows and outcroppings look like opportunities to me.”

At the Children’s Museum of Richmond, a painted cardinal is perched on a fire alarm. It looks like it’s been ripped straight from an Audubon field guide. From its beak comes a pop art-looking speech bubble containing the numeral 1. Above, a great blue heron soars, its wings painted across the ceiling’s pipes. It sings the numeral 2, prompting viewers to look for some kind of key.

For all of Herr’s public presence, she also makes a lot of house calls. She’s painted bedrooms, bathrooms and nurseries.

“You have to think of it like a tattoo for a house,” she says. “It needs to be archival, it needs to withstand weather … or kids.

In the sunroom of one local home, Herr painted vines of regional flowers and butterflies up the wall and across the ceiling, creating a garden of earthly delights.

“Public or private mural, my goal is to always create an environment,” she says. “I want people to see something new every time.” S