How a rare print by Vincent van Gogh was discovered at VCU. 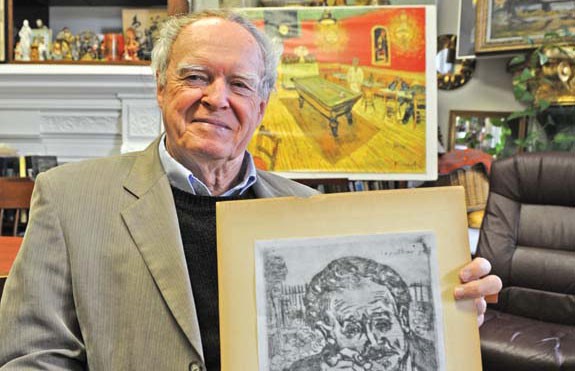 Cliff Edwards was early. Waiting for a meeting at Virginia Commonwealth University's president's house, he began to pace. A portrait in the corner of the room caught his eye. The minute Edwards saw the print he knew exactly what it was — a van Gogh.

Edwards, a religious studies professor and author of three books about the late Dutch painter contacted the university's Anderson Gallery, which locked the printing away for safekeeping.

It turns out that, in 1889, after Vincent van Gogh was hospitalized at Saint-Rémy-de-Provence for what some scholars now believe was bipolar disorder, the painter went to stay with his friend and physician Dr. Paul-Ferdinand Gachet.

"Gachet was a mentor and a helpmate to van Gogh," says Amy Moorefield, former Anderson Gallery assistant director and curator. "[Gachet] really tried to help him nourish his arts career."

Gachet was entertaining van Gogh at his house one day and asked him to do an etching. What resulted was a portrait of Gachet, and the only known etching that van Gogh ever did. At the time, he was just six weeks away from committing suicide.

The print became part of VCU's collection through the school's first president, Henry Hibbs. Back then the school was still known as Richmond Professional Institute, an arm of the College of William and Mary. Hibbs was an avid art collector and travelled extensively through Europe to acquire pieces. Edwards best guess is that somewhere in England, Hibbs came across the etching. Hibbs donated more than 700 works to the university, among them the van Gogh, a Dürer, two Rembrandts and a Toulouse-Lautrec lithograph.

At the time, art conservation wasn't quite the craft it is today, so school administrators proudly displayed the art in their offices and around campus. When Bruce Koplin became director of the Anderson Gallery in the '70s, Moorefield says he was shocked to find many priceless works on display and demanded their return.

Two of these works included sculptures of a ram and an angel by "outsider" folk artist William Edmondson — each worth $2 million — that the university placed in a campus courtyard. The ram sculpture later held court in former President Eugene P. Trani's office.

Somehow the van Gogh was overlooked until Edwards stumbled upon it, though this probably had something to do with his relative obscurity when it was first displayed an unknown number of years ago. "Van Gogh wasn't nearly as well-known then as he is now," says Anderson Gallery Coordinator Traci Horne Garland.

The troubled artist's place in the public imagination was helped by the 1956 film "Lust for Life," starring legendary actor and recent Oscar presenter Kirk Douglas. "Even in the 1920's and '30s there was not a big rush to get van Gogh," Edwards says. "It took awhile for him to catch on."

After Edwards ran into the etching in the late 1980s it was sent to the van Gogh Museum in Amsterdam to be authenticated. Moorefield says the museum appraised the work at being worth more than half a million dollars. The print was last on display in 2006, and Garland says there are no plans to exhibit it anytime soon.

Sitting in his office surrounded by van Gogh reproductions, pictures with students and religious iconography, one large framed image takes up the center space above Edwards' desk. The photograph is of small wheat field, shot through the bars of van Gogh's cell at the Saint-Rémy asylum. Van Gogh stayed in the cell for six months receiving "water treatments," and created a dozen paintings from that view.

Currently at work on a fourth book about van Gogh, the 78-year-old Edwards reflects back on his surprise run-in with a masterpiece as one highpoint in four decades of teaching at VCU and Randolph-Macon College.

"What if I hadn't told?" Edwards says. "Then I'd be able to see it every day. I could just walk in and look. Now it's put away because it's worth so much. You don't want it to be stolen." S