Virginia's scrappy wine industry took off by avoiding wholesalers. Now the tabling of a state bill may threaten to put some small vineyards out of business. 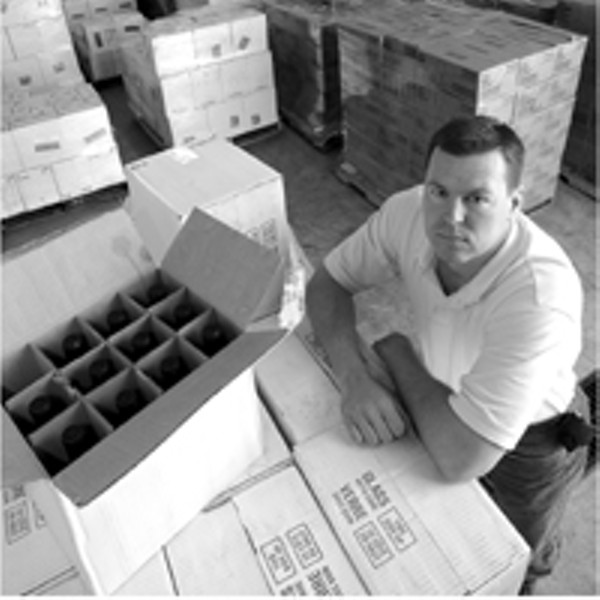 But that was before a Richmond judge deemed their distribution practices, condoned by state law, unconstitutional.

The Battersons, like owners of most small Virginia wineries, were bypassing the middlemen — wine wholesalers — who drive up wine prices by at least 30 percent. The problem was that same opportunity isn't afforded to out-of-state wineries, putting them at a competitive disadvantage that violates federal commerce laws.

"We kind of got the carpet yanked from under us," James Batterson says. "It's just really awful timing. Instead of promoting growth, this is really discouraging it."

Many small wineries with especially tight margins would have to drop their prices considerably to counter the wholesale markup and remain competitive in the market. "Even if we were able to find a distributor," Batterson says, "I don't know if we would be able to sell the wine at the discount they require."

James River Cellars is one of the many Virginia farm wineries that were adversely affected by the ruling and were counting on legislation introduced during this General Assembly session that would have leveled the playing field.

The bill, introduced by Delegate Christopher B. Saxman, R-Augusta, would have allowed Virginia wineries to continue selling wine directly to retail shops and restaurants without using independent wholesalers. The catch: Out-of-state wineries that produced less than 250,000 gallons of wine a year would also be exempt — an attempt to answer critics who complained the state law was discriminatory.

But a House committee tabled the bill Jan. 31.

Since 1974, when Virginia issued its first farm winery license after Prohibition, the industry has grown exponentially to more than 250 vineyards and 100 wineries. Virginia is now the fifth largest producer of vinifera wine in the nation.

The rapid growth is frequently attributed to a long history of state support in the form of favorable legislation, such as the Farm Wineries Act of 1980, which has served as a model for other states. Among other things, the law allowed farm wineries to self-distribute.

Many in the industry hoped Saxman's bill would provide a similar legislative solution this session. Now that the bill's been put on hold, the wine industry is in a precarious position.

The change will drastically affect the business plan of James River Cellars, which opened in 2001. James Batterson says the winery had hoped to increase production to 10,000 cases a year, but the ruling "takes away all motivation for growth."

Like most Virginia wineries, James River Cellars started out small, making only 800 cases its first year. As the customer base grew, it increased its average annual production to about 2,000 cases. Today roughly 80 percent of James River's sales come from its Glen Allen tasting rooms and wine festivals. The remaining 20 percent comes from self-distribution.

"Even if I doubled in size to meet their needs as a distributor, I wouldn't be making any money on it," Batterson says of using wholesalers. "It ends up hurting the customer."

Terri Cofer Beirne, a wine industry lobbyist with McCandlish Holton in Richmond, says that without self-distribution, farm wineries have limited options for marketing their product. They can attempt to distribute through existing wholesalers, try to establish their own independent wholesale operation or limit production to in-house sales, she says.

What's more, even getting independent wholesalers to distribute their wine isn't a given. Distributors mostly carry well-known, higher-volume wines that have an established clientele. Typically, winery representatives find distributors less willing to take on products from smaller wineries. And wineries are reluctant to rush into contracts because the Virginia Wine Franchise Act makes those contracts practically impossible to terminate.

As a potential solution, the industry is exploring the option of wineries establishing their own separate, independent wholesale operations, either individually or collectively, Beirne says. But she cautions that such a move may ultimately prove impractical, cost-prohibitive and possibly illegal, given the complexities of laws governing wholesale licensing and operations.

Meanwhile, James River Cellars may be forced to limit wine production. The winery, located just off Interstate 95 in Glen Allen, about a 10-minute drive north of Richmond, attracts customers year-round, Batterson says, and business lately has been brisk. The Battersons hope customers will visit more often, stock up at festivals and have wines shipped directly to their homes. Smaller wineries on remote family farms, however, might not be so lucky.

As expected, opposition to Saxman's bill comes primarily from wholesalers who argue that allowing out-of-state wineries to self-distribute undermines the three-tier distribution system put in place when Prohibition was repealed. This system requires producers of alcoholic beverages to sell to wholesalers, who then sell to retailers. Those in the wine industry say that Virginia wineries have been self-distributing under a legal exception to the three-tier system since 1980 with no detrimental effect.

In practice, as production and distribution expand, economies of scale come into play. It eventually becomes economically feasible and even cost-effective for wineries to begin distributing through independent wholesalers. Supporters of the bill contend that by limiting the size of wineries allowed to self-distribute, the state can satisfy the constitutional requirement for in-state and out-of-state parity and continue to foster growth in the wine industry.

Still, the wine industry holds out hope that Saxman's bill, or similar legislation, will re-emerge in the near future. Until then, industry experts say, wine lovers could see selection in wine shops and restaurants drop and prices spike. S