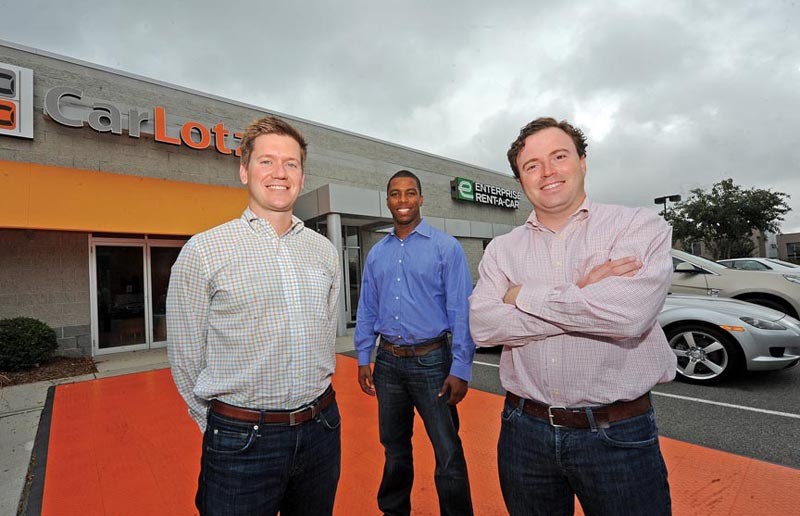 CarLotz is easy to miss, nestled among the sprawling car dealerships along Midlothian Turnpike. There are the Dodge, Nissan, Porsche, Volvo and Land Rover dealers and the behemoth CarMax across the street.

Inside a former Lotus showroom, Michael Bor and his two partners are quietly launching an assault on the used-car industry. They sell cars, too, but they own no inventory. Their profit margin is static — $599, whether they sell a 2010 Lexus or a mid-’80s Volvo. The 60 or so used vehicles in their parking lot aren’t facing the street like they do at traditional dealers, and the selection is potluck. There are the requisite Camrys and Accords, along with a 1968 Chevelle and 1978 Mercedes and a flaming red 1996 Dodge pickup, detailed in the likeness of Richard Petty.

The cars are sold on consignment.

“From a customer experience, it’s very similar to CarMax. From a business model perspective, it’s totally different,” says Bor, chief executive of CarLotz, which opened in June. “We don’t take any inventory risks; we don’t take any pricing risks. So we strip a lot of the costs out of the model, and that savings gets transferred to the consumer.”

Car sales, however, represent the second largest chunk of the nation’s economy, behind only housing. New car dealers sold 11.5 million new cars and 18 million used cars in 2010, ringing up $564 billion. It’s incredibly vital to the country’s overall health, and car sales are an important economic barometer. Car dealers saw the housing collapse coming a good year before the subprime mortgage meltdown. Richmond, in fact, has earned a reputation as something of an automotive retail innovator. One of the region’s strongest Fortune 500 companies, CarMax, revolutionized the used-car industry in the mid-’90s by standardizing pricing and instituting a transparent selling process.

CarLotz, albeit tiny, may be the next logical step in the used-car business.

The company’s founders, Bor, Will Boland and Aaron Montgomery, have introduced a simple concept that’s put the industry on notice. Car owners leery of selling to dealers pull into CarLotz and pay flat $199 fees to have their vehicles professionally cleaned, state inspected, photographed extensively and listed on nearly three-dozen websites such as AutoTrader and Cars.com. Bor and his partners handle everything — the phone calls, emails and visits from potential buyers — and only make money if a car sells. If one does, they pocket a flat $599. The $199 listing fee, Bor says, covers only cost.

The idea is simple, Bor says. Because traditional dealers must purchase their cars and assume the inventory risk — typically buying from customers trading in or at wholesale auctions — they have enormous overhead. That affects how much they need to make off each car. Typically, Bor says, dealers are looking to sell their used cars at a profit margin of between $3,000 and $5,000. For the trade-in customer, that means the dealer has to buy the car at a considerable markdown.

Most dealers bet that the average used-car owner is willing to sacrifice more money for less hassle. It’s a pain to sell a car on your own. Meeting potential buyers during lunch breaks, worrying about exchanging money with a stranger — it isn’t a pleasant experience. People bemoan car salesmen and dealers, but at least they make the process simple and easy. It’s why CarMax has been so successful: It eliminated the haggling, made the process more transparent to customers and kept prices fixed.

“It’s so comfortable to sell to them,” George Hoffer, a transportation economist at the University of Richmond, says of CarMax. But if CarMax has a weakness, it’s this: It doesn’t have pricing power like other mass retailers. It gets its cars from the same places that new and used car dealers do — customers and wholesale auctions. CarMax makes up for the lack of pricing control with sheer size and technology, using its size to cull market data that its competitors don’t have access to. It has 106 locations, selling 659,000 cars in fiscal 2011, making it the largest car dealer in the United States.

Hoffer, who regularly meets with Bor to discuss business strategy, says the CarLotz model has a real chance of taking hold. But there are obstacles: First, CarLotz is likely to get customers looking to unload used cars that the dealers didn’t want.

“Since the customer is dissatisfied with what the dealer offered, they are probably trying to sell something that is out of favor with the market,” Hoffer says. “A concern is you’d stock your lot with contra-cyclical vehicles.”

Bor bets the opposite is true. Customers with market-ready, desirable cars likely will know they’re worth more. Today there’s a deluge of pricing data available online and elsewhere, which makes consumers better informed. That’s one reason the business has been hammered during the recession. New car sales have plummeted since 2007, and used car sales have spiked. Since 2007, 86 dealerships in Virginia have gone out of business, says Michael Allen, director of public affairs for the Virginia Automobile Dealers Association.

In other words, it might be an opportune time for a competitor such as CarLotz.

“I think the person with a great car is actually more inclined to come to us,” Bor says. So far, he’s been right. CarLotz is exceeding expectations. In August it sold 40 cars. The business plan called for 30.

Ron Moore, the business consultant hired by Circuit City 20 years ago to brainstorm new business ventures — the company brass initially thought his idea for CarMax was a little crazy — says the consignment approach is a plausible one.

“It reduces my hassle and increases my chances of getting more money,” he says of the approach. “Even if have to pay an $800 fee, even if I don’t get more, I might sell it faster — and that’s an advantage.”

There are obstacles. The CarLotz model, if it works, would seem easy to replicate. With no inventory overhead, start-up costs are minimal. And the new car business is beginning to turn around, which will affect used car prices.

In the aftermath of the housing collapse — and the tsunami in Japan earlier this year, which affected Toyota and Honda manufacturing production — there’s pent-up demand for new cars. Hoffer predicts the Japanese manufacturers, reeling over lost market share, will aggressively flood the market with new cars in the coming months.

But Bor isn’t worried. He and his partners have pedigrees that are a bit unusual for car dealers — all three graduated from Harvard Business School.

“We’re trying to change the reputation of the industry,” Bor says. “If other people copy our concept, and consignment of automobiles becomes very popular, we’d love that. We think it’s the best way to do car transactions.” S