A Kiwi settles in at LuLu's. 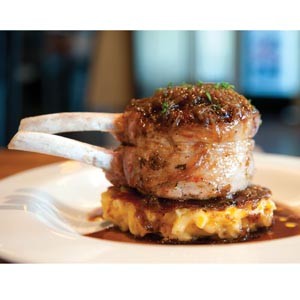 You can thank the heavy metal band Nine Inch Nails for the recent elevation of the comfort fare at LuLu's, the younger sibling of Millie's.

Chef Neil Smith traveled the world for eight years as a caterer for touring entertainers — most recently for Paul McCartney. But when Nine Inch Nails came here to perform at the Richmond Coliseum five years ago, Smith met a local gal who made him want to trade the exciting but exhausting globe-trotting for a place to call home.
After that, Smith came here between tours, married Nikki Price in 2009 and settled here full-time last spring. When Paul Keevil took sole ownership of LuLu's in November he installed his fellow Anglophone as chef. The two men have much in common, including a passion for food and an English background: Keevil is a Brit and Smith grew up in New Zealand, a son of English parents.

Smith has added confit leg of duck with beluga lentils, wine-braised lamb shanks in a bean stew and parsnip purAce and, these days, shad roe, while retaining the heartier menu staples.

His imprint may be most noticeable on a grilled double-cut pork chop: At two inches thick it looks like lamb on steroids. You want to pick it up by the ribs and summon the maiden for mead. Other dishes are fried catfish with collard greens in lobster butter sauce with corn pudding, and meatloaf with onion gravy, glazed carrots and mashed potatoes. Entrees begin in the high teens and top out at $27 for grilled strip steak. Appetizers range from $8 for a salad to $12 for a bowl of crustacean-laden gumbo.

Smith, a self-taught 40-year-old, left New Zealand to cook in a Michelin-rated restaurant in the Cotswolds in England, then returned home to open a restaurant in Christchurch with a friend. After several years, disillusioned, he returned to England and signed on with the London-based Eat Your Heart Out, which specializes in catering for famous touring artists.

Confidentiality agreements prevent Smith from spilling too much, but he said most on-the-road performers prefer simple meals such as grilled-cheese sandwiches for themselves and crews. During seven months touring with McCartney, only vegetarian food was served, while the Eagles, unlike most stars, required a different menu for themselves than for the crew.

The number of cooks assigned to tours depends upon the size of the entourages. Madonna required a dozen cooks for a crew of 200 for shows in New York, while lesser-known acts needed only a pair. The show's promoter hires someone who is familiar with local purveyors and supplies kitchen help.

Catering on the run is a pressure-packed life, especially when shows are booked several nights in a row. At each stop a full kitchen must be assembled, often under difficult circumstances wearing hard hats backstage, on loading docks and even once on the roof. While the show is ending, the kitchens are disassembled and packed in a truck, and the cooks head for a bus to sleep until the next stop. Smith says being on the road “gives you stamina, and is a good job if you're single.”

A typical workday on the road ran to 18 hours. These days he works about 13, beginning by making English muffins, focaccia and sourdough bread, smoking meats, making stock and brining chicken for chicken and dumplings.

Lulu's is competitive with Millie's in vibe and victuals, and has a better policy on reservations — it takes them, especially helpful for brunch on a cold Sunday. You no longer need to shiver outside at Millie's with a Bloody.

One sour note, which may be explained by Smith taking an afternoon off, was an order for eggs over-medium, delivered hard. Such a misstep appears rare, and hardly noticed by a rocking crowd. New Zealand is famous for lamb, which at LuLu's arrives as a red-wine braised shank sitting in a flageolet bean stew and a parsnip purAce.

But Smith says Kiwis don't eat much lamb, preferring to export it around the world. So the only New Zealand treat is a burger on the lunch menu — beef topped with pickled beets and a fried egg. For fans of British food, fish and chips are available at lunch. S