Richmond’s most famous Indian is turning 50, returning to his roots and planning his musical future. 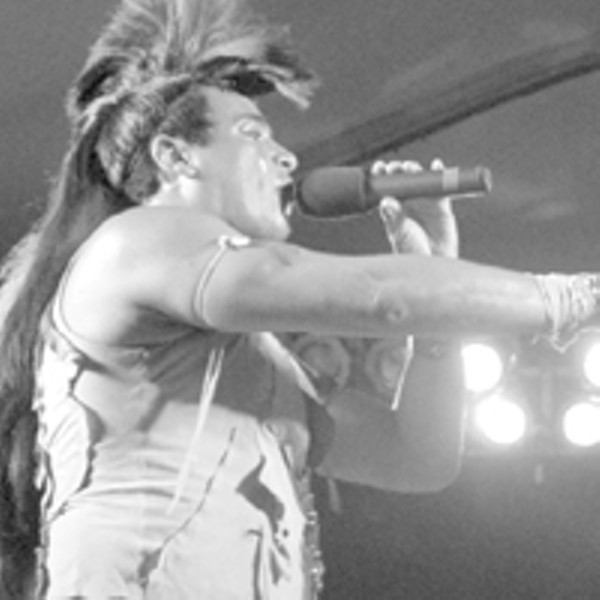 “I like this here better than that plate,” he announces. Rose sweeps aside a decorative plate, printed with an Indian’s aquiline profile, and places the key on the bar.

The memento is a gift from the days when “Y.M.C.A” first hit the discos, before it became a wedding reception standard. Rose remains the Village People’s Indian, as he has for 27 years. But the time has come to try on some new hats.

Rose doesn’t like the bland, white walls of the office, a suite in downtown’s trendy Tobacco Row apartments. “This wall’s going to be painted in some kind of native color,” he says. Something rich and bright, maybe crimson, to contrast with the gold records he plans to hang on the adjoining brick walls.

And he frowns at the plain, black-and-white plates his assistant, Deborah Crawford, brings out for lunch: sushi from the local market and Tott’s champagne brut.

“I need to buy some new native-ware,” Rose says to himself.

The Indian is going back to his roots.

Felipe Rose was born Jan. 12, 1954, in Brooklyn. His mother was Puerto Rican, his father a full-blooded Lakota Sioux.

From an early age, he loved to perform, and Rose’s aunt encouraged him to discover his heritage. As a young man, he danced in New York nightclubs in Native American costume, as producer Jacques Morali first found him in 1977 in Greenwich Village.

Seeing Rose and other costumed dancers conjured a vision in Morali’s mind of a disco group representing macho American icons. According to Rolling Stone magazine’s biography of the Village People, Morali and his business partner, Henri Belolo, first hired studio musicians to perform several gay-themed songs they wrote, such as “San Francisco” and “Fire Island,” for an album that became a club hit in Britain.

Morali then assembled a live act, recruiting first Rose then other men to be the cop, the cowboy, the soldier, the construction worker and the biker.

“Macho Man,” on the eponymous first album, became their first hit, in 1978. Six months later the band released the album “Cruisin’,” which included the legendary single “Y.M.C.A.” Another success, “Go West,” followed in 1979.

In 1978 the group took home the American Music Award for Favorite Band, Duo or Group – Disco. It was the first — and last — year the AMAs featured a disco category. And soon afterward the Village People faded from the charts.

But the group did not die. Despite numerous cast changes (Rose is one of three remaining original members), the Village People continue to perform — at parades and football games, fairs and casinos.

The current People are content with the life, Rose says. “I asked the guys a month ago at a meeting, ‘Where do you guys see yourselves in five years?’

“They had no idea. They couldn’t answer me. … They like what they do, but that’s all they do. They just tour and then go home, and they live private lives.”

But Rose grew weary. “Village People, I could do this with my eyes closed,” he says. “I’m such a name-dropper, but it’s something Cher said: You can’t keep doing the same thing all the time.”

Then came a fateful visit to Richmond in August 2001, for a concert at Innsbrook and a fund-raiser for local Native American tribes.

Rose “just fell in love” with the climate and the feel of the city. A year later he closed his production company in New Jersey, packed up his cat, Sahara, and all his headdresses and moved to an elegant house near the city’s venerable Byrd Park.

“So here we are in Virginia,” he says. “And we do love Virginia.”

“It is for lovers,” Crawford adds.

And here, Rose resolved to reinvent himself.

Rose is growing older and “finding and tapping into my creative energy again. I’m finding out that there’s still a lot more to give, it’s just it’s in a different form now.”

Rose possesses a curious kind of celebrity. Although instantly familiar in his full regalia, offstage he more often gets a “Was that — ?” stare.

Yet most Richmonders have heard he lives here; he has been sighted at local bars, the Richmond Athletic Club, the Carytown Kroger. Ask for the 1980 Village People movie, “Can’t Stop the Music,” at Video Fan, and the clerk inquires whether you’ve heard that one of them lives around here.

Rose is the rare urban legend that is real.

The idea tickles him. “Is it a fact that one of the Village People lives in Richmond, Virginia?” Rose says, putting on a deep, TV-announcer voice. “True or not true? True.”

Yet life is far removed from what he once knew: wild club nights, roller skating with Cher, traveling on the Concorde with Susie Quattro, Bonnie Tyler and Tina Turner.

In Richmond, Rose performs at baseball games and United Way benefits. He plans to visit classrooms to talk about Native American history and his first solo single, “Trail of Tears.”

Released in 2002, it’s a “retelling of the rise and fall of the Cherokee nation,” Rose explains. The album won him his first keyhole-shaped Nammy last year. His latest single, “We’re Still Here,” won another this fall.

The award is perhaps less recognized outside Albuquerque. But Rose cried when he first took it in hand.

“A lot of people questioned it,” Rose says. “And some refused to believe it. And others were like, ‘Why now?’ Everyone always thought his headdresses and leather chaps were just a costume, he says. The award proved otherwise.

“It now makes me a contender,” reasons Rose, who has wholly embraced the genre. Native American music is not only chants and flutes, he says, but jazz, blues and even rap, like the Shadowyze album that’s pounding on his office stereo.

“Native music is on its way. We’re gonna say three years, before it really breaks big. They’re just waiting for something to take it to mainstream.” Just like the Latin explosion, he says. And he could be that catalyst, Rose says, that Ricky Martin or Marc Anthony.

“Artists are going to seek the creative consultation of someone like me,” Rose says, someone who can say, “Let’s change this music and make it a little more pop. Let’s make it a little bit more listenable to the ear.”

Rose’s Tomahawk Records will begin searching for these artists this winter, he says. “We’re going to build our record empire here and really take it to new heights.”

His location in Richmond is no liability for him. He has a recording studio with friend Ric Morris in Petersburg, while his producer and collaborator, Frosty Lawson, works in New Jersey.

In Richmond, his close friend and helpmate is Crawford, who remembers names, marks down dates and keeps his life straight. Rose met her at the 2001 fund-raiser, Crawford says, and gave her free tickets to the Innsbrook show. She later wrote him a thank-you note, she says, a gesture that impressed him so much they became friends.

Crawford wears a chunk of polished amber at her throat, a gift from Rose. The two go to the Jefferson Hotel once a month, he says, where they sit in the back and drink “massive amounts” of apple martinis.

She knows his quirks, Rose says fondly, knows that “if there’s a meltdown, then break the chocolate out and just give him 10 minutes.”

“Yeah, I noticed all the candy was gone,” Crawford says.

“The candy was gone ’cause I’m frustrated,” he says. “I want to get going here.”

He once thought of building a Disco Hall of Fame in Richmond, but that project will have to wait until after his new album is complete, he says.

And he wants to hit other areas of Virginia, he says, pondering a performance in Hampton Roads: “I can get it to a club, with maybe one or two pow-wow dancers, and just get in there and shake a tail feather.”

In the Tobacco Row office, the six Village People grin behind glass on a framed Rolling Stone cover from April 19, 1979. The paper is yellowed and wrinkled now, but Rose, minus the war paint, looks little different. He bears only a few lines on his face. His long hair gleams black.

Rose has only a three weeks left to keep going on it.

“It’s the big birthday,” he sighs.

It’s strange to be a Village Person still, after nearly three decades in the band. The group is officially history now. But it remains pop culture too: Witness an Internet quiz titled “Which member of the Village People are you?”

The group is opening for Cher in Las Vegas on Jan. 2 and 3, Rose says, and later in the month, he’ll be finishing his own album and touring with the group.

Yet he sounds more excited about teaching schoolchildren than singing “Y.M.C.A.” one more time. He never learned about American Indian history as a child in Brooklyn, Rose recalls. Instead, “in grade school the teacher would say to me, ‘Well, we’re having a Thanksgiving parade, and Felipe, you’re our Indian.’”

And he will always be our Indian — The Indian — with a capital T. S