Ode to a Special Teacher

Arnott Mader (1928-2022) was a beloved dancer and teacher who gave everything to his students.

Arnott Mader passed away at the age of 93 on April 14, after a lifetime of teaching dance, including generations of students at VCU.

When a beloved teacher dies, grief ripples across generations of students, and only then does his legacy begin to come into focus.

The days following dancer Arnott Mader’s death on April 4, at the age of 93, revealed an outpouring of sorrow and celebratory posts about his life and influence that surprised even those who knew how beloved he was.

Mr. Mader, as his students always called him, refined the technique of generations of Richmond dancers while offering them his ready wit, rigor, and incredible stories of performing with the Royal Ballet and on Broadway during the mid-20th century.

At the peak of his career, he moved among stars.

Mader grew up on a farm in Ontario and, after marveling at a fellow student’s performance on pointe during a high school assembly, studied ballet at the Royal Academy of Dance in Toronto, and then on scholarship with the Royal Ballet in London. He toured with the Royal Ballet during the mid-1950s, even dancing with world famous ballerina Margot Fonteyn. Broadway also beckoned with a stint in the cast of “Hello, Dolly!” alongside Carol Channing, and a tour with the same show to Vietnam for soldiers during the war, with Martha Raye in the lead.

Many students and friends cite Mader’s wealth of stories as a highlight of their relationships with him. But they also know he was more than simply glamorous by association. His profound love and respect for the art form infused his work as a performer and a teacher. Even Margot Fonteyn knew this. While standing in the wings together before a performance of “Swan Lake” (he, Baron von Rothbart, she the Swan), Fonteyn turned to him and said, “Arnott, if everyone in this company had your discipline and dedication, this would be a much better company.”

After his performing career, Mader brought that discipline with him into the dance studio as a ballet teacher for over 20 years at Richmond Ballet and over 30 at Virginia Commonwealth University.

“He would give everything he had in the studio and he expected the same,” says longtime friend and caregiver Sarah Ferguson, who first encountered Mader as an intimidating teacher when she was a new student at VCU, and later became friends with him during her professional life as an administrator at Richmond Ballet.

Dancer Chris Burnside, who served as Chair of VCU Dance in the mid-‘90s, said of Mader in the studio: “He was really demanding. He was a stickler on technique. But then he had this other side, this soft, proud side. He was just proud of the students when they succeeded.”

Former students who went on to professional dance careers were often touched when Mr. Mader appeared at the stage door, following their performances, to congratulate them and celebrate their achievement.

Burnside was surprised to discover an even deeper influence on his own career. “Dragged,” as he recalls, by his mother to see a performance of “Hello, Dolly!” in Richmond in 1967, Burnside was delighted by the male dancers of the chorus and decided right then he wanted to dance. Decades later, he described this moment to Arnott in the dressing room at VCU Dance and was floored to learn that Mader was one of those dancers. 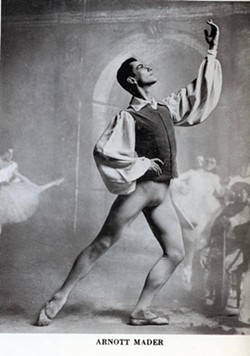 A love of travel combined with a love of the arts took Mr. Mader all over the world on solo trips to far-flung places, and across the U.S. to keep up with dancers he taught and companies he admired. Never a driver, he would take the bus to New York, stay at the YMCA, and sometimes see multiple performances of the same show with different casts. He would post mini-reviews on his Facebook page, revealing a keen eye for not only dancers’ technical skill, but their chemistry and performance quality.

A characteristic post from June of 2018 – when he was 89 - encapsulates his passionate love of the arts, his dogged independence, and his own effervescent glamor:

After the worst trip I have had between Richmond and NY (left at 1:30pm and didn't get here till 11:00 pm, rained the whole trip and traffic beyond horrible), then my room was not kept because the desk person had not put in my credit card. Imagine, if you will, this old bag of bones trying to get into a lower bunk!! Not a pretty picture!

However, on the bright side saw Misty Copeland do Swan Lake!!! Wonderful beyond words, lives up to all the publicity! Uses body, technique wonderful, made up for previous day’s misery! Cornejo partnered beautifully and danced brilliantly. Tonite am going for Hee Seo [another American Ballet Theatre principal dancer] and tomorrow Anastasia, the musical. Ta Ta!

During his acceptance speech for the 2013 Theresa Pollak Award for Excellence in the Arts in Dance, Mader spoke of the influence of teachers, particularly his own in Ontario, Bettina Byers, who took him under her wing and set him on the path that shaped his life. “I visited her almost every year from 1970 until 2003, when she passed away at the age of 93. …I am so happy that I was always able to remind her that what I did, and am doing, was because of her.”

The respect and love he felt for his teachers was reflected back to him by his own students, many times over, because of his pride in them. These beautiful patterns of reciprocal exchange nourished him all the way to the end, and will carry forward through the lives and work of those he taught. Despite the physical decline of his final years, Mr. Mader remained surrounded by caring friends – many of them former students.

And, as Burnside says: “His exuberance hardly ever dimmed.”