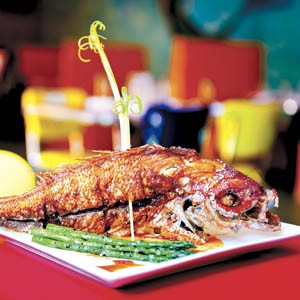 Since Pescados China Street opened in late June, it has often attracted lines out the door to rival those at Mamma ‘Zu at the other end of the block, whose southern Italian fare long has been regarded among the best in the city. Jointly they have transformed a single block of funky Oregon Hill into a dining destination, each offering food that is among the city's most sophisticated. But other than that, the two spots have little in common. Pescados, which means fish in Spanish, is far brighter and cheerier in attitude and dAccor.

After half a dozen visits — far more than duty required, but which pleasure demanded — I feel confident in saying this is the best new restaurant in town in a long time. The food is exemplary, the presentation innovative, the service knowledgeable and the atmosphere relaxing. Chef and owner Todd Manley, whose Midlothian location has been dishing up award-winning Latin cuisine since 2002, and his new business partner, Bob Windsor, welcome customers like old friends.

The Canadian-born executive chef, Loretta Lane, a graduate of New York's French Culinary Institute, cooked at Bacchus and Edible Garden before joining Pescados a year ago in Midlothian; that restaurant remains open under another Manley protAcgAc.

The China Street menu is a seafood-oriented mix of Caribbean and Latin flavors. Fish arrive daily from suppliers in North Carolina and Hawaii, and in addition to crab, shrimp, oysters and other staples, daily specials may be blue marlin caught by trolling. Specials cost as much as $30, with most entrees in the $20s.

Standing tall, literally, among the regular fare is a whole fried one-and-a-half-pound Cancun red snapper, erect as a soldier, served with saffron potato cakes and grilled zucchini, seasoned with lemon, rosemary and a mAclange of chili peppers, herbs and vinegar. Dig beneath its crispy pink skin and be rewarded with a succulent treat, firm and flavorful.

Many dishes exude an elegant touch. Paella (peas, clams, mussels, shrimp and chorizo) luxuriates in a saffron-tomato infused risotto; a roll of Alaskan halibut sits atop scalloped potatoes; corn tortillas are crammed with mahi-mahi, and lobster tail and claw, grilled to perfection, can be doused with avocado-lemon-grass butter and are accompanied by grilled sweet potato and watermelon salad.

While fish rule at Pescados, meat, poultry and vegan entrees also are out of the ordinary. A seared 12-ounce pork chop, moist and thick, is sweetened with a chipotle-orange glaze and charred pineapple salsa with sweet plantains, black beans and zucchini. A grilled, chili-marinated Angus rib-eye tops a mash of Mexican cheese and potato.

As tempting as the main courses are, you might get sidetracked by the appetizers ($7-$13) or a trio of Canary Island-inspired pizzas ($9-$12). Arepas, a South American cornmeal cake, is a flavor festival of pork, sweet chilies and corn salsa in a basil jalapeAño sauce; conch fritters bathe in a cilantro-lime-serrano aioli, and okra and Spanish cheese compliment wild-caught shrimp and grits, which is actually cornmeal couscous.

Early arrivals are rewarded with true bargains. Until 6:30 p.m. there are $4 special appetizers, such as lobster cakes, fried green tomatoes, mussels, empanadas, seviche or shrimp nachos in lobster cream (a little light on the shrimp). Wash those down with a $3 malbec or chardonnay, a $3.50 margarita or a pitcher of red or white sangria ($22).

A couple of caveats: Pescados China Street does not take reservations, and unlike its South Side namesake, does not offer a children's menu, although the kitchen has been known to prepare special concoctions such as a Caribbean sushi — sashimi tuna in a tortilla — for little fans.

Locating in Oregon Hill is a homecoming of sorts for Manley, who was attracted to the eclectic neighborhood as a student at Virginia Commonwealth University in the '90s, where a Spanish professor, Luis Diaz, introduced him to the food, passion and culture of the Caribbean. It took more than a year to renovate the building, once the site of a notorious bar. As a result, while Pescados has an attractive bar, co-owner Windsor emphasizes, “We are not a bar.”

The venture has been successful enough that Manley and Windsor are preparing to seek city approval to add an outdoor kitchen on the adjoining back lot, for roasting whole pigs and creating 6-foot paellas with the potential for outdoor dining. To address demand, they say, Sunday brunch hours are coming this fall.