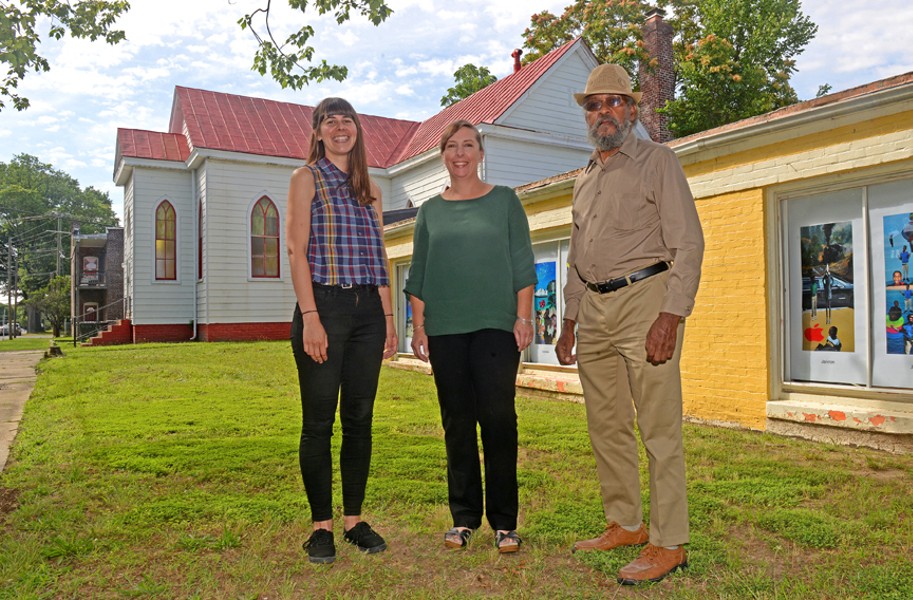 After the last presidential election, photographer Shannon Castleman felt she needed to do something.

A West End native and Virginia Commonwealth University adjunct faculty member in photography and film, Castleman first wrote letters and participated in the Women's March in Washington. By March of 2017, she was discussing with friends and community members the challenges of bringing diversity to the visual arts.

One month later, she had a letter of occupancy in hand for the Thomas Branch Memorial Methodist Episcopal Church in Oakwood that was built in 1906 (with additions made in 1927) and an online fundraising page. Castleman founded the nonprofit Oakwood Arts — an education platform that brings together community members, especially kids from Richmond's East End, to engage with art as a potential career.

"I mean really, what's happening in our country?" says Castleman, executive director of Oakwood Arts. "My students at VCU and seeing how few minorities I have in my program and some of the struggles that [those minorities] had when they got to art school. … The high drop-out rate for those students … seeing the lack of diversity in our city's creative economy."

Castleman says "we all kind of looked around after the election and thought, 'What can I do to help be a part of the change I'd like to see in my country and my community?'"

Unsurprisingly, starting a nonprofit has been a do-it-yourself process for Castleman, a photographer and educator. She spent a decade abroad establishing a design school at the Dar Al-Hekma University in Jeddah, Saudi Arabia and similar programs in Singapore, Vietnam and Cuba before returning to Richmond in 2012.

"Right now, this is full time even though I have not received a paycheck yet. … I have no nonprofit experience so I really didn't know what I was going into. I love it right now, but this is a lot of work," says Castleman, laughing.

She hit the ground running with a small staff and volunteers, university students, a board of directors and advisors, and interns. Its first event in May 2017 was a panel discussion with film industry experts for students at Armstrong High School. Since then, Oakwood Arts has offered cyanotype, digital, and pinhole-photography workshops for kids and established an artist residency with Malawian artist and university faculty member Massa Lemu. It also launched City Studio, a weeklong art camp that included time with muralist Hamilton Glass at Art180, a visit to the Main Street Train Station, and a workshop with the Richmond Performing Arts Alliance. That's just a smattering of its community events.

In May, however, it discovered its building is structurally unsafe. But this glitch is not stopping Castleman, who instead is working with established venues such as the Virginia Museum of Fine Arts. To get the kids around town, Castleman has committed to using GRTC buses, although most of the kids had never ridden a bus before. Castleman says she decided, "Let's just start using it and try to make it cool."

Oakwood Arts is also throwing its first fundraiser at Candela Books and Gallery this month. A live and silent auction will raise money for educational programming and include a raffle of art books, hors d'oeuvres and drinks and a DJ. The silent auction offers work by student mentors and board members. Candela's founder, Gordon Stettinius selected the work and calls it "the friends and family show." The live auction features work by artists such as Susan Worsham, Dennis Winston, Tuan Mami and Taravat Talepasand. Also up for bidding are two experiences, such as a mural by Glass.

Castleman also hopes the auction will spur some friend raising and some interest in starting a capital campaign to raise money to purchase, repair and rezone the historical building. She's optimistic about the future.

"Best-case scenario is we find a temporary space or a selection of temporary spaces over the summer and we can actually get some first-stage construction done so we can get back into our building by the summer. We would then kick off the capital campaign and start [the renovation process] in phases." S